Barack Obama in large part started out like this: He gave a speech at the 2004 Democratic Party National Convention that a lot of people liked, and in no tiny part because of that single speech, he was made president of the United States of America after he hadn’t even completed a full six-year term in the U.S. Senate.

Now, billionaire celebrity Oprah Winfrey makes a speech that a lot of people like, and there is clamor for her to be president.

You’d think that by now we’d have learned our lesson about how smart it is to put a billionaire TV celebrity who’s never held any elected office into the White House, but Americans never fucking learn.

Of course Winfrey very probably would do a better job than “President” Pussygrabber is doing. But who wouldn’t?

You wouldn’t want your surgeon or even your veterinarian or even your car mechanic to have had no prior experience for the job, so why the fuck would you not demand that the person holding the most powerful job not only in the nation, but probably also in the world, have had some previous experience navigating Washington, D.C.?

What the fucking fuck? 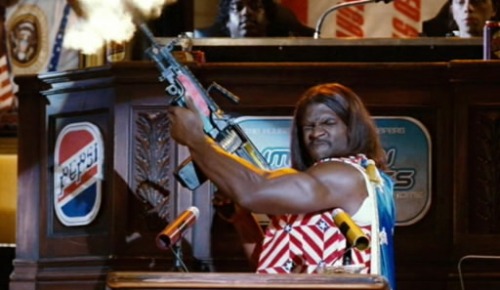 We’re already terrifyingly close to that with “President” Pussygrabber, but we have time to reverse course.

One fucking touching speech does not make a good president of the United States of America. Barack “Hope and Change” Obama, who unnecessarily lost the House of Representatives in November 2010 because he squandered his shitload of political capital in 2009 and 2010 and who thus was hamstrung for the final six fucking years of his eight-year presidency, is proof enough of that.

A boring-ass person who is progressive and who knows D.C. — like this guy:

I cast no aspersions on Oprah Winfrey’s intelligence or her leadership abilities. And I’m fine with a black woman being president — if she is qualified for the job.

But I went in blind when I voted for Obama in 2008 — yes, I more or less bought the viral “hope” and “change” bullshit, and I regret it — and right now we have a billionaire TV celebrity in the Oval Office, and every fucking day he makes it crystal fucking clear how important previous experience in elected governance at the federal level is to be POTUS. (Obama’s previous experience in D.C. of only four years was not enough experience, I believe his milquetoast-at-best presidency amply proved.)

I hope that President Oprah fever subsides quickly. I can’t vote for her, and should she actually emerge as the 2020 Democratic Party presidential candidate, I’ll remain an independent.

I want to return my party registration to the Democratic Party, but I can do so only when and if the party earns my loyalty and respect, and looking to billionaire TV celebrities instead of to experienced elected officials to fill the presidency isn’t the pathway there.

The United States of America is at the precipice on many fronts, and we cannot afford to take another chance on yet another unknown quantity occupying the Oval Office.