I have yet to see it reported in the mainstream media, but it’s clear that “Democratic” Sen. Dianne Feinstein of California (pictured above, I’m pretty sure) is going to run for a fifth six-year term.

I voted for the center-right, mostly irrelevant Feinstein exactly once, in 2000, when I was still pretty new to California and didn’t know much about her. Over the ensuing years I learned a lot more about her, such as how her war-profiteering husband profiteered from the unelected Bush regime’s illegal, immoral, unjust and unprovoked Vietraq War that she voted for, and therefore I haven’t voted for her since.*

Feinstein, whose net worth exceeds $50 million (yeah, she’s just one of us!) and who at age 8fucking3 is the oldest (apparently still living) member of the Senate, could step aside and vacate the seat that she has held since 19fucking92, giving a younger, fresher, much more relevant face a chance to represent the great state of California, but why do the right thing?

I knew that Feinstein was running again when fairly recently I started receiving e-mails from her again. (I am on her e-mail list.) Seriously, I can tell you that this is her pattern: It’s radio silence from her for several years, and then, when the next primary election for her approaches (it will be in June 2018), you’ll hear from her.

— and has small print at the bottom that reads “Paid for and authorized by Feinstein for Senate 2018.”

Sadly, as long as she still lives, Repugnican Lite Feinstein will win re-election. Californians are pretty fucking dumb where it comes to re-electing her.

Hell, they’d probably vote for her corpse, which they essentially have been doing for a while now anyway.

Waiting out the shit show 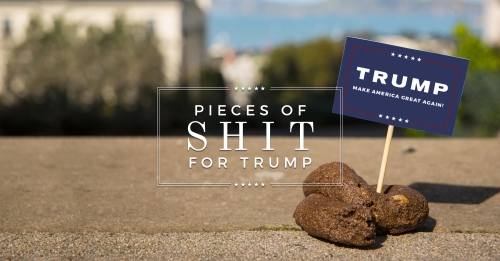 My regular readers (all two or three of them) might have wondered why I haven’t been blogging on “President” Pussygrabber. After all, there has been plenty of material.

Actually, there’s way, way, way too much material. As many, many others have noted, it’s pretty much impossible to keep up with a White House that continuously belches out controversy and scandal, polluting the sociopolitical atmosphere like one of the planet-killing coal-burning facilities that the Repugnican Tea Party traitors love so much.

When all is said and finally done, the unelected Pussygrabber regime — yes, if you lost the popular vote, you are unelected, in my book, in which “democracy” means that the office actually goes to the candidate who won the most votes — will have caused harm to millions of people, including the poor and the working class, immigrants who only are striving for better lives for themselves and their families, and plenty of others of perennially oppressed groups of human beings.

But hey, the American electorate had the opportunity to elect a true populist — Bernie Sanders — but blew it. Big time. Now we see, daily, the consequences of that colossal blunder.

Unfortunately, an incredibly huge chunk of “Democratic” voters still defend their support of the widely despised* Repugnican Lite Billary Clinton, indicating that they haven’t learned and never will learn a motherfucking thing. Indeed, their definition of “the Democratic Party” necessitates a certain level of corruption and double-crossing of the populace, because Hey, that’s politics! We want our “Democratic” politicians to be corrupt! We won’t be outdone by the Republicans in the corruption department!

To a large degree I’m just sitting this out, as I had to sit out the eight long years of the unelected George W. Bush regime.

The American electorate sat idly by while the Bush regime simply stole the 2000 presidential election, in return for which they (well, I suppose, we) got the preventable 9/11 and the illegal, immoral, unjust and unprovoked Vietraq War (including the wonderful Abu Ghraib House of Horrors). And then the American electorate was incredibly stupid enough to “re”-elect Bush, and in return they/we got Hurricane Katrina and a total economic meltdown. The intellectually lazy, ignorant electorate gets what it deserves.

I’m happy that I’m in California, which will continue to serve as a buffer against the worst of the unelected Pussygrabber regime, but Pussygrabber probably won’t get a second term.

Right now Pussygrabber has the support of fewer than 40 percent of Americans. You can’t do much with an approval rating that’s only in the 30s.

I don’t see Pussygrabber managing “re”-election when his post-election favorability ratings have yet to hit even 50 percent in any reputable poll.

Not that the calcified, center-right, corporate-ass-licking Democratic Party establishment can’t fuck up yet another presidential election by fixing the primary election season for yet another despicable, pro-corporate candidate, but if Pussygrabber survives even his first term, I cannot see him getting a second.

So: Pussygrabber’s consistently low approval ratings mean that he can’t claim that the majority of Americans have his back. We don’t. He doesn’t have popular/majority support for his bullshit.

And thank Goddess for the many checks and balances of the American political system, which consist not only of the three branches of government, but also of the simple fact that Washington, D.C., is like King’s Landing of Westeros, with so many factions fighting each other for power that no one faction can sit on the Iron Throne for all that long. (I mean, fuck, already there is talk that Mike Pence, who is as evil as Pussygrabber if not more so but who knows how to comport himself in public, might sit on the Iron Throne in the not-too-distant future.)

Finally, I have to quote Esquire’s political writer, Charles P. Pierce, who recently noted that “The one thing that may save us from a Trumpian dictatorship is that they’re so transcendentally bad at it.”

Indeed. Pussygrabber himself has admitted, on camera, that he obstructed justice by having fired James Comey as FBI director because the FBI has been looking into Muscovite Candidate Pussygrabber’s many ties to the enemy nation of Russia.

Pussygrabber has given us plenty of rope with which to hang him; we need only to use it. Of course, the traitors who comprise the Repugnican Tea Party, who now control the House and the Senate, and who put their treasonous party far above the best interests of the nation, will do their damnedest to prevent that, but they won’t be in power forever.

In the meantime, the shit show out of D.C. no doubt will continue, and I won’t even bother to try to respond to all of it, because it’s all just a colossal distraction from the single, simple, basic fact that, like a malignant tumor, “President” Pussygrabber needs to be removed from the body politic.

*Right up to Election Day, Billary’s favorability numbers were only where “President” Pussygrabber’s are right now — at not even 40 percent.

Note that in most 2016 nationwide polls, by the time enough Americans were familiar with him, Bernie Sanders garnered a favorability rating of more than 50 percent, entirely unlike Pussygrabber or Billary.

Before Election Day, on Election Day, and to this day, Bernie has been the most popular of the three among all American voters, yet the corrupt, Clintonian Democratic Party establishment still shits and pisses on him.