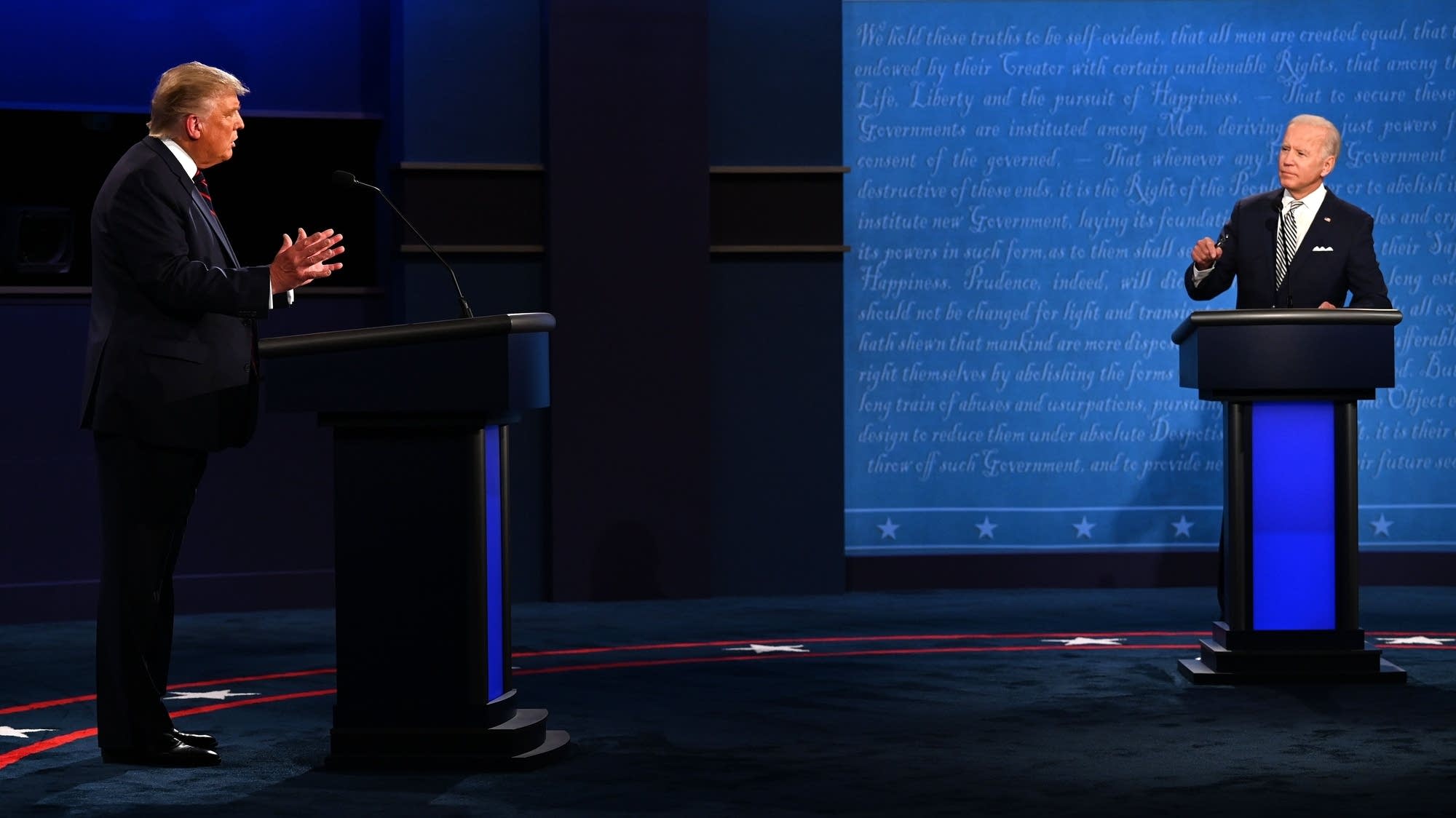 “President” Pussygrabber looked fat, sweaty and desperate tonight, and came off like a cranky fucking baby, whereas Joe Biden did what he needed to do: act and look presidential.

Do I expect Pussygrabber to lose any of his mouth-breathing, knuckle-dragging die-hard supporters’ support? No, because they’re fucking insane.

But Pussygrabber already has their support baked in — and it’s not enough. It’s the swing voters of the swing states that Pussygrabber has to win over, and thus far, Biden is doing significantly better at appealing to those voters than is Pussygrabber; Real Clear Politics’ polling averages of what it calls the “top battlegrounds” — Wisconsin, Michigan, Pennsylvania, North Carolina, Florida and Arizona — show Biden right now leading Pussygrabber in all six of those states by an average of 3.5 percent, ranging from Biden’s small lead of 0.5 percent in North Carolina to his sizable lead of 5.7 percent in Pennsylvania.

I expect that after the polling catches up to tonight’s Dumpster fire of a debate — and I blame that fire on Pussygrabber, not on Biden, as Pussygrabber brings his Dumpster fire with him everywhere he goes, and it’s all that he fucking knows — we’ll see even better numbers for Biden.

Don’t get me wrong; I supported actual Democrat Bernie Sanders in 2016 and this time, too, and no, I won’t be voting for Joe Biden, as he’s going to win all 55 of my state’s electoral votes anyway (I could vote for Pussygrabber and it wouldn’t fucking matter here in deep-blue California).

But during the first hour of the debate, the thought crossed my mind that I might even give Biden my first, small donation to his campaign. That desire soon passed, but I still see Biden winning this thing. It’s his to lose, anyway.

“The American people should have a voice in the selection of their next Supreme Court justice. Therefore, this vacancy should not be filled until we have a new president.”

— Yertle McConnell, on February 12, 2016, the day of the death of Antonin Scalia

“President Trump’s nominee [to replace Ruth Bader Ginsburg] will receive a vote on the floor of the United States Senate.”

Upon learning of the death of Ginsburg on Friday, I knew immediately that the treasonous, hypocritical Repugnicans (redundant) would do their best to ram her far-right-wing replacement through the Senate, even though they’d denied the twice-duly-elected President Barack Obama the right to name the successor to Antonin Scalia when Scalia finally kicked off when Obama still had more than 11 months of his final year in office left.

If the Repugnicans succeed in ramming through a right-wing nutjob to the U.S. Supreme Court, lots of repercussions should follow.

First of all, I expect that this debacle will only increase the chance that the Repugnicans will lose control of the U.S. Senate come January. (Fivethirtyeight.com already gives the Democrats a 59 percent chance to retake the Senate.)

But merely losing the Senate isn’t nearly enough punishment for the Repugnicans’ treasonous, hypocritical, severely-bad-faith effort to deny Obama the right to name a new Supreme Court justice because Obama is a Democrat and because he was our first black president (I have no doubt that racism played a role in that debacle) — but then to brazenly totally fucking ignore their own “reasoning” from the last time around after another Supreme Court justice has died.

(As I noted at the time, Yertle McConnell’s claim that the people should have the right to first chime in on the next presidential election was, of course, bullshit. The American people know, or at least should know, that the U.S. president gets to fill any vacancies on the U.S. Supreme Court, and they elected Obama twice, knowing this or should having known this.)

The Democrats in the Senate should use every possible maneuver to deny “President” Pussygrabber the right that Barack Obama unprecedentedly was stripped of the last time that a Supreme Court justice died.

If Pussygrabber & Co. succeed in getting another of their fellow fascists on the nation’s highest court while Pussygrabber is still in office, then the Democrats, when they have control of the Senate in January, must eliminate the filibuster and pack the U.S. Supreme Court.

The anti-democratic filibuster should go, and there is no reason why we can’t have, say, a 12-member U.S. Supreme Court. (The New York Times notes that “Although the Supreme Court has consisted of nine justices for well over a century, the Constitution does not require that number, and Congress changed the size of the court several times between its establishment and the Civil War.”)

I wouldn’t take either of those tactics off of the table even in the unlikely event that the Repugnicans actually cave in to political pressure and back down on ramming through a new Supreme Court justice before President Biden is sworn in.

(Thus far only one Repugnican U.S. senator, the embattled Susan Collins of Maine, who faces an uphill battle for re-election in November, has said that the process of naming Ginsburg’s replacement shouldn’t happen until after Inauguration Day in January 2021; and only one other Repugnican senator, Lisa Murkowski of Alaska, who is up for reelection in 2022, has said that the nomination shouldn’t happen until after Election Day, but she has not said that Ginsburg’s replacement should not be rammed through the Senate between Election Day and Inauguration Day 2021.)

Thus far, the Repugnicans haven’t paid the price for their many, many years treason and their political terrorism.

And thus far, the Democrats haven’t held the Repugnicans’ feet to the fire, but have allowed them to get away with their treasonous bullshit.

We, the people, must hold the Democrats’ feet to the fire. We must make it increasingly difficult for the Democrats to continue to let the Repugnicans off scot-free.

Bullies need to have their fucking asses kicked. It is the only way that they ever might learn.