TIME magazine’s having made Barack Obama its “Person of the Year” yet again (it first gave Obama that designation for 2008) reminds me of the ludicrously premature awarding of the Nobel Peace Price to President Hopey-Changey-Droney for 2009.

Not that TIME routinely is exactly creative or visionary in its naming of its annual “Person of the Year.” Winning a U.S. presidential election often if not usually is enough of an accomplishment/“accomplishment” for an individual to win the designation. Jimmy Carter won the designation in 1976 and Ronald Reagan did in 1980. Bill Clinton won it in 1992 and even George W. Bush won it in 2000 and in 2004 — and then, as I noted, Obama won it in 2008 and then again this year.

The Nobel Peace Prize selectors are a lot more creative — the only two U.S. presidents to win the prize during my lifetime (I was born in 1968) were Jimmy Carter in 2002 and, as I noted, Obama in 2009. (Well, Al Gore, who actually won the presidency in 2000, was awarded the Nobel Peace Prize in 2007, but he wasn’t coronated as president by the right-wing U.S. Supreme Court.)

I fail to see why, other than TIME’s lack of vision or creativity or imagination, Obama was named the magazine’s “Person of the Year” again this year.

I mean, TIME’s selection comes right as Obama apparently just handed over U.S. Ambassador to the United Nations Susan Rice’s scalp* to the KKK, headed by Grand Dragon John “Sore Loserman” McCain, so that the much more acceptable old white guy (John Kerry) can be made U.S. secretary of state instead, and as Obama apparently is poised to sell us out to the Repugnican Tea Party fascists on Social Security, and Goddess knows what other historic Democratic achievements the center-right DINO Obama will dismantle during his second term. (Surely Obama will be a progressive president in his second term, the Obamabots theorized. The gloves will be off! Yeah, right. I’m so glad that I voted for Green Party presidential candidate Jill Stein on November 6.)

TIME’s 2008 designation of Obama as its “Person of the Year” I can accept. He not only beat Billary Clinton in the protracted Democratic presidential primary season, which was a political feat, but his election as the nation’s first non-white president was at least a milestone if not technically a great accomplishment.

But TIME’s 2012 designation of Obama is just fucking lazy.

True, Obama, given his dismal first term, is damned fucking lucky to have been re-elected. He promised “hope” and “change” but delivered more of the same. Instead of pushing through a progressive agenda when both houses of Congress were in his party’s control in 2009 and 2010, he squandered his once-in-a-lifetime political capital by trying to sing “Kumbaya” with the Repugnican Tea Party traitors — and thus his party lost the House to the “tea party” traitors in 2010.

Obama won re-election last month only because the Repugnican Tea Party dipshits incredibly stupidly nominated one of the most unlikeable people on the planet as their presidential candidate for 2012.

Multi-millionaire Mormon Mittens Romney is so freakishly unrelatable that even many if not most Repugnican Tea Party traitors had to hold their noses while they cast their votes for him (better the despicable white guy than the black guy again), so of course Mittens lost the so-called “swing vote.”

Obama didn’t win re-election because he’s so great, but because his opponent was so unbelievably bad, replete with telling his Richie-Rich donors on hidden camera in May that he already had written off 47 percent of the American people as being lost causes.

Fuck, make David Corn of Mother Jones magazine, who broke the “47 percent” story in September, the “Person of the Year.” He did more to win Obama re-election than Obama did.

Even TIME magazine’s editor seems to credit changing U.S. demographics to Obama’s re-election more than to Obama himself. Reports Reuters:

[TIME magazine] has tapped U.S. President Barack Obama for its Person of the Year for the second time, citing his historic re-election last month as symbolic of the nation’s shifting demographics and the rise of younger, more diverse Americans.

In announcing its annual selection [today], the magazine called Obama the “Architect of the New America.”

“He’s basically the beneficiary and the author of a kind new America — a new demographic, a new cultural America that he is now the symbol of,” TIME editor Rick Stengel said of Obama, who was also selected for the honor in 2008 when he became the nation’s first black president. …

Obama is the beneficiary of demographic changes and the resultant national cultural changes, to be sure — as well as he was the beneficiary of what Howard Dean built in his failed 2004 Democratic presidential bid (indeed, in 2008 Obama rode Dean’s wave right on into the White House) — but how, exactly, is Obama the “author” or the “architect” of these changes?

Barack Obama could fart or sneeze and it widely would be called a great fucking accomplishment.

Only in a dying empire, it seems to me, could this be the case.

*If you thought that Obama actually was going to defend a person of color from the lynch mob to the death, don’t feel too badly. I also actually thought that maybe this time Obama wouldn’t throw a person of color who is under attack by the white supremacists under the bus, but, of course, just as he did with the Rev. Jeremiah Wright, Van Jones and Shirley Sherrod, he apparently tossed Susan Rice right under those big wheels.

Because he’s a man of character and courage, you see.

Let’s make him the “Person of the Year” every year! 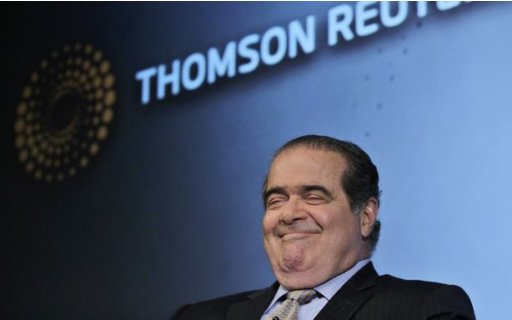 U.S. Supreme Court “Justice” Antonin Scalia yesterday publicly compared homosexuality to murder and then claimed that he didn’t do what he just did.

How in the fuck did Antonin Scalia get into law school? Didn’t he have to pass an exam on logic and reason? How did he pass the bar exam? How in the hell did he end up on the U.S. Supreme Court?

So having sexual relations that others (theofascists, usually) consider to be “immoral” is in the same ballpark as taking a human life. (Scalia reportedly said that he wasn’t equating homosexuality and murder, oh, but wasn’t he?)

To answer Scalia’s deeply philosophical question — the kind of question that stoned, C-average college freshmen might ask each other — yes, one may have “moral feelings” for or against anyfuckingthing he or she chooses. That is his or her right, as sane or insane as he or she may be.

However, when it comes to imposing one’s own “moral feelings” upon others, that’s another fucking story altogether.

The long-standing general idea of FREEDOM in the United States of America — and the U.S. Constitution, which Scalia is supposed to be upholding, is supposed to guarantee us FREEDOM — is that one may do as he or she pleases as long as it does not cause actual harm anyone else.

And no, someone whose irrational (often religion-based) sensibilities are offended (gasp!) has not been harmed. Nor does the U.S. Constitution guarantee that the precious wingnuts shall never be offended (gasp!) in the course of civic life, although the wingnuts apparently believe that they possess that constitutional right.

So, is it enough that some find homosexuality to be immoral — that is, icky, if not “sinful” — to deprive adults of the right to associate with whomever they please, including having consensual relations, sexual and/or affectional and/or matrimonial, with other adults of either sex?

Our nation is governed by the U.S. Constitution, not by the Old Testament, no matter what “Christo”fascists like Scalia assert.

I find “Christo”fascists to be immoral — they don’t even know the teachings of Jesus Christ, much more follow them — and I find the damage that these evil hypocrites do to society to be much, much closer to murder than is homosexuality, but would it be constitutional to outlaw the practice of their religion?

No, that would be a blatant violation of their freedom, right?

What about the rest of us who disagree with the “Christo”fascists? What about our freedoms?

Scalia and his ilk are doing their best to murder them.

Before we restrict another’s freedoms, we need to demonstrate that such a restriction is necessary to prevent actual harm.

Murder is illegal because the actual harm that it causes is amply desmonstrable. Those who oppose same-sex marriage and who support other forms of legalized discrimination against non-heterosexuals and non-gender-conforming individuals, however, have failed miserably to make such a demonstration of actual harm. They only can fall back upon their backasswards religious beliefs and/or their personal sensibilities and predilections — not upon logic and reason, certainly not upon science (which is why they detest science so much).

In the meantime, there is plenty that is demonstrably harmful that remains perfectly legal in the United States.

Speaking of corporations, cigarettes and alcohol quite demonstrably are quite harmful. Many even find them to be immoral. Is Antonin Scalia willing to add the sales of harmful, addictive substances to his little list of what’s immoral — and what thus can be deemed illegal?

He just wants to bash the gays.

He is an ugly, oily stain on the nation, a stain that should be removed.