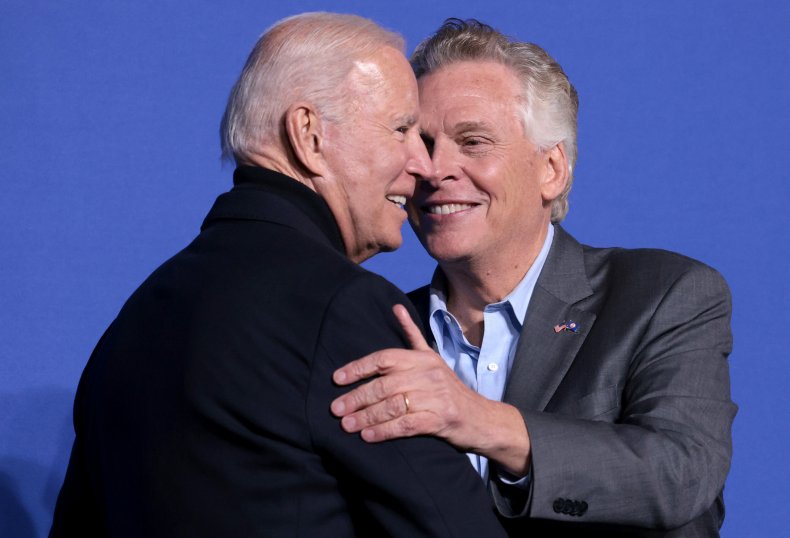 I’ll admit it right off: Before Virginia’s gubernatorial election of last week, I gave DINO retread gubernatorial candidate Terry McAuliffe a grand total of $10, only because e-mails from two other candidates whom I support (Democratic Nevada Gov. Steve Sisolak, who is running for a second term for 2022, and Pennsylvania Lt. Gov. John Fetterman, who is running for the U.S. Senate for 2022) asked me to. That was the only way that I was going to give McAuliffe a penny: via a request from a Democrat whom I actually like and have some respect for (despite shilling for the likes of McAuliffe; there is considerable pressure from the party to do such unsavory things, I’m sure).

But the low amount that I begrudgingly gave McAuliffe demonstrates my lack of enthusiasm for the likes of him.

And it is beyond pathetic that one close* gubernatorial race — Virginia’s — widely has been portrayed as a sure harbinger of the 2022 midterm elections. Democratic California Gov. Gavin Newsom beat the gubernatorial recall effort against him by 62 percent to 38 percent in mid-September. Why wasn’t that gubernatorial election portrayed as having national significance?

Oh, because California isn’t representative of the nation as a whole. But is Virginia? Really?

What if the candidate is defective? I find Terry McAuliffe to be wholly uninspiring, and while I’m registered as an independent because I cannot abide by the turncoat corporate whores who call themselves “Democrats” (just like McAuliffe), I generally vote for the most progressive yet still viable Democrats, as I have little to no other choice in our fucked-up partisan duopoly.

If McAuliffe doesn’t float my boat at all, how was he supposed to excite the Democratic and Democratic-leaning voters of Virginia?

Plus, McAuliffe already was Virginia’s governor, from January 2014 through January 2018 (you can’t have two four-years terms in a row in Virginia, and Democrat Ralph Northam has been the state’s governor from January 2018 to present). Clearly, McAuliffe’s first stint as Virginia’s governor didn’t excite enough of the state’s voters for a Round Two. He was a shitty choice for the Democratic gubernatorial candidate, just as Joe Biden was a shitty choice for the 2020 Democratic presidential candidate. (And Sleepy Joe’s downward slide into becoming Jimmy Carter 2.0 is proof positive of that.)

Further, how blue has Virginia been anyway? While the Democrats had control of the governorship from the mid-1870s all the way through the 1960s, the Repugnicans captured the governorship in the 1970s and into the early 1980s, and again from January 1994 through January 2002 — and again from January 2010 through January 2014. While the last four presidential elections in Virginia went to the Democratic candidate, the Repugnican presidential candidate won Virginia from Richard Nixon in 1968 all the way through George W. Bush in 2004.

Given its electoral history, I wouldn’t call Virginia a blue state — and that’s not shocking, since it was a slave state, for fuck’s sake. (My personal rule is that I’d never live in a former slave state. The mentality that made slavery even possible never fully leaves the state, in my opinion; it’s what I’ll call a forever stain.)

Of course the Democratic establishment (comprised of the “centrist” corporate whores ever seeking to perpetuate their self-serving scams on the American people), from which the likes of McAuliffe hails (Wikipedia notes that McAuliffe was “chairman of the Democratic National Committee from 2001 to 2005, and chairman of Hillary Clinton’s 2008 presidential campaign”), has been blaming McAuliffe’s loss on “wokeness” and on progressives, with all of their crazy talk that spooks too many voters.

Of course, the vast majority of voters in Virginia who are turned off by progressivism and/or by “wokeness” never were going to vote for a Democrat anyway. And it’s a better idea, I think, to try to fire up your own base than it is to think that you’re going to convince members of the other side to join yours; the vast majority of them never are going to, so it’s better to use your resources to shore up the votes that you’re already much more likely to get (rather than to risk losing them via neglecting your base at least in part by trying to woo the opposition).

And the DINOs never, ever are going to admit even the starkly obvious fact that their ability to excite the Democratic and Democratic-leaning voters wanes with every single fucking election — and that’s because they are doing the business of their corporate sugar daddies and puppeteers, not the business of the people.

For their votes you promise the people appreciable improvement in their lives, yet because you’re beholden to the very same treasonous (redundant) corporations who refuse to allow any real improvement in the average American’s life, the voters eventually see that while they keep voting for your party’s candidates, their lives, as Sleepy Joe might put it (oh, wait: he did), never fundamentally change. Yet still you expect their votes — even though all that you have left, because you have no accomplishments of your own to point to, is to try to frighten the voters by the even worse Repugnican candidate.

You can win an election here and there by primarily to even solely demonizing your opponent. In fact, in the aforementioned recent California gubernatorial recall election, once Repugnican front runner Larry Elder’s right-wing whack-job views were made public, the election stopped being about Newsom’s hitherto gubernatorial record and became about what a right-wing whack job Elder is and how out of step his political views are with the Californian electorate.

But will this political tactic work for every election in perpetuity? Methinks not. It’s no long-term political plan.

If — and it’s a gargantuan “if” — McAuliffe’s loss gives the Democratic establishment an inkling that their “strategy” of foisting fossilized corporate whores like McAuliffe — and yes, Sleepy Joe — on the electorate is a huge fucking mistake, then his loss would have been for the greater, long-term good.

But as long as the old fucks (with rare exception, such as Bernie Sanders) still run the Democratic Party, the party will continue to languish. (And, of course, Sanders remains an independent, not a Democrat, even though, like me, he has little choice in our corporately owned and controlled partisan duopoly but to try to work with the Democrats.)

The moral of the story of McAuliffe’s loss last week is this: At some point, you actually have to give the people a good reason to vote for you.

P.S. I stumbled across this and thought that I’d share:

In October 2017, before current Democratic Virginia Gov. Ralph Northam was elected, fivethirtyeight.com’s Harry Enten wrote this: “… I’d urge you not to read too much into Virginia’s governor’s race. State politics are different from national politics. … More than that, gubernatorial elections — especially in Virginia — don’t necessarily reflect the national mood.”

I’d ask what has changed in the last four years that this no longer would be the case. 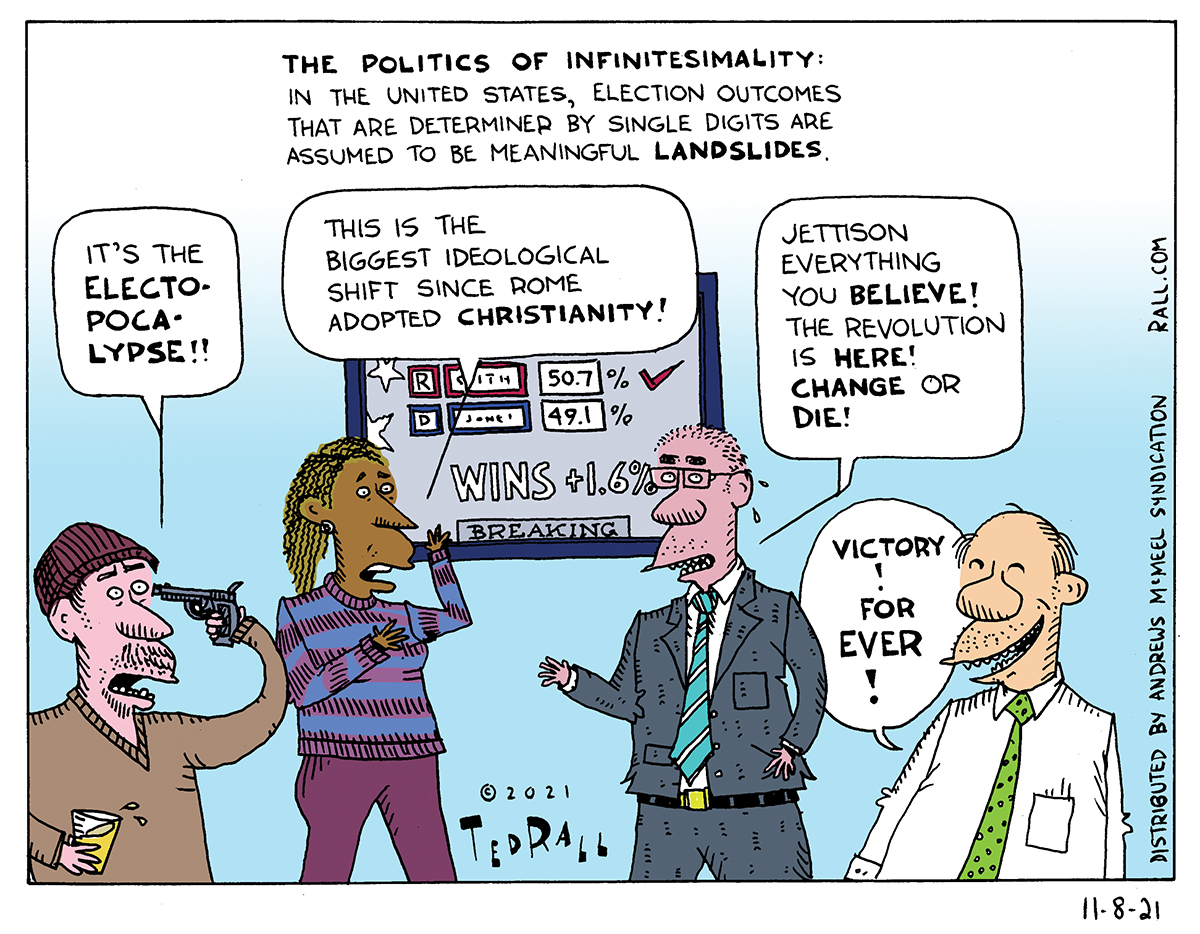