California State Sen. President Kevin de León (pictured above left) yesterday won 54 percent of the vote of the delegates at the annual state Democratic Party convention in San Diego, a crushing blow to Sen. Dianne “Cryptkeeper” Feinstein (above right), whose name depressingly and oppressively has been on the ballot for the past 25 years. Cryptkeeper won only 37 percent of the delegates’ votes — 485 fewer votes than de León won.

Wow. For a little while I was a little worried about Kevin de León’s bravely insurgent campaign for the U.S. Senate seat for California that the ancient, Democrat-in-name-only Dianne Feinstein — whom I lovingly think of as “Cryptkeeper” — has held with a death grip since 1992.

Not only did de León recently win the endorsement of the nation’s largest state’s largest public-sector union, the Service Employees International Union (for once the Billary-Clinton-loving union to which I belong got a political endorsement right), but yesterday at the annual state Democratic Party convention, de León handily denied Cryptkeeper the state party’s endorsement.

The Los Angeles Times calls it “an embarrassing rebuke of” Cryptkeeper and notes that “Though de León did not get the endorsement, his success in blocking Feinstein from receiving it shows that his calls for generational change and a more aggressively liberal path have resonated with some of the party’s most passionate activists.”

Of course multi-millionaire Cryptkeeper, one of the wealthiest U.S. senators, has more campaign cash in the bank (including at least a cool $5 million that she gave herself) than does de León, and of course because of her name recognition (she has been around longer than has God), Cryptkeeper is polling better right now than is the much-less-known de León, but de León’s big wins — such as winning the majority of the state party delegates’ votes and winning not only SEIU’s endorsement but also the California Nurses Association’s — demonstrate that not only is de León a serious contender, but that plenty of Californians have had it with the plutocratic Cryptkeeper’s center-right bullshit and wish her gone.

I expect de León’s coffers to fill soon, and I expect his poll numbers to climb the more that Californians realize what a winner he is. And I expect more labor unions to endorse him, and without labor unions’ help, I can’t see Cryptkeeper winning. Her big money alone won’t be enough; she’ll have to actually earn enough votes.

The 84-year-old Cryptkeeper could have saved herself this embarrassment and stepped down, but she’s been tone-deaf to her constituency, who is to the left of her on many if not most issues, for years. The only reason that they’ve been re-electing her is that this is the first time that a viable alternative has emerged.

Cryptkeeper is no longer inevitable, and that’s great news not only for the people of California, but for all Americans who are affected by Cryptkeeper’s center-right votes in the U.S. Senate.

P.S. Also yesterday, California gubernatorial candidate Gavin Newsom (who also has been endorsed by SEIU) garnered more votes for a state party endorsement than did any other candidate, with 39 percent.

While DINO Antonio Villaraigosa and Newsom have been in the top two in polling, yesterday Villaraigosa came in at fourth place in the endorsement vote, garnering only 9 percent. (The second-place winner garnered 30 percent and the third-place winner garnered 20 percent, and because there are so many Democratic gubernatorial candidates, it wasn’t expected that any one of them would reach the 60-percent mark necessary for an endorsement from the state party.)

I expect Newsom, who is my imperfect-but-preferred candidate, to become California’s next governor.

Some are saying that these votes for state party endorsements reflect only the wishes of party insiders, but these so-called party insiders are dispersed throughout the state and they are opinion leaders. These state party endorsement votes aren’t meaningless, even though both de León and Newsom fell short of 60 percent (which, in my opinion, should be reduced to anything above 50 percent).

P.P.S. I should note that under California’s top-two primary system, the top-two vote-getters (regardless of party) in the state’s June 5 primary will move on to the November general election, and I expect the top two to be Kevin de León and Cryptkeeper. (In 2016, there were only two Democrats on the ballot for U.S. Senator for California, Kamala Harris and a nut job who didn’t stand a chance against Harris.)

Some have posited that because Cryptkeeper is center-right — that is, Repugnican Lite — the state’s Repugnicans will vote for her, figuring (correctly) that she’s closer to their political orientation than is de León.

But I don’t know about that. I’d have to see a poll or polls of registered Repugnicans that asks whether or not in a de León-vs.-Cryptkeeper race they’d vote for Cryptkeeper or not vote at all. I surmise that most of the state’s Repugs wouldn’t vote for a Dem, not even DINO Cryptkeeper.

In any event, for de León to win, it’s going to take grassroots support. He doesn’t need as much money as Cryptkeeper does, but he does need those of us who are left of center to vote. 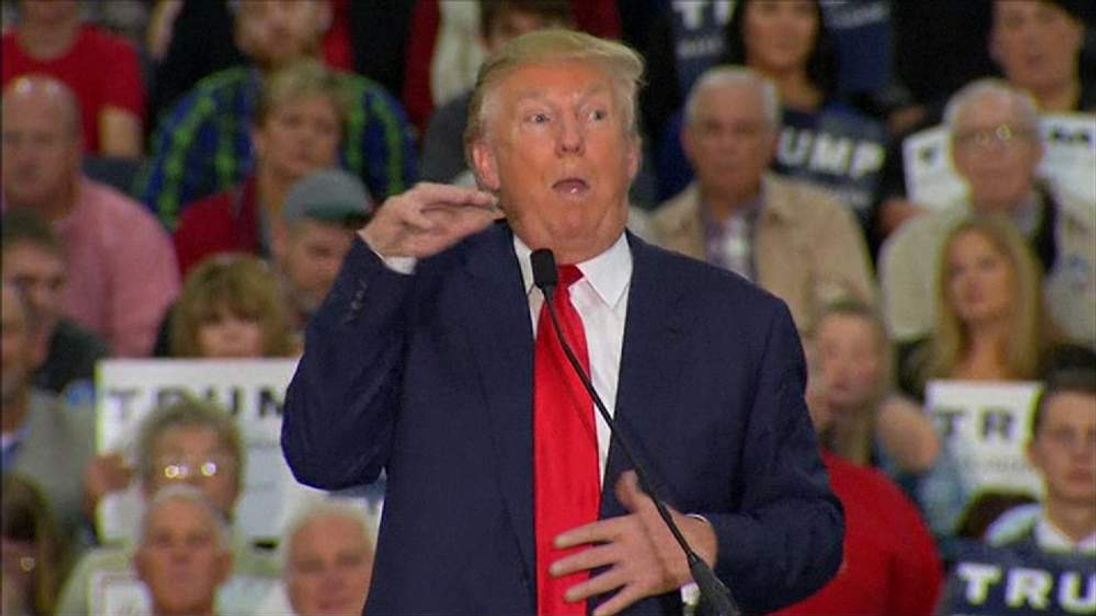 In one of his many, many fine, presidential moments, “President” Pussygrabber mocks a disabled man during one of his KKK rallies in November 2015. I remain such a proud American on this President’s Day.

It’s hard to celebrate the holiday when for the past year-plus it has felt like my nation has had no president at all. It certainly hasn’t had a legitimate one, not since noon on January 20, 2017.*

“President” Pussygrabber’s approval rating, however, probably will make him a one-term president, if he makes it through even this term.**

Earlier this month Gallup had Pussygrabber’s approval rating at a whopping 40 percent, but right now has him back down into the high 30s (at 37 percent, to be exact).

Indeed, during most of his hostile occupation of the Oval Office, Pussygrabber’s approval rating, per Gallup, has remained stuck in the 30s, only occasionally breaking into the low 40s.

The highest that “President” Pussygrabber ever garnered in Gallup’s regular presidential-approval polling was 46 percent — a high that he hit shortly after his inauguration and that he never matched again.

In December, Vox.com reported that Pussygrabber’s December approval rating in the mid-30s was the worst presidential approval rating at that point in a president’s administration since long before I was born: 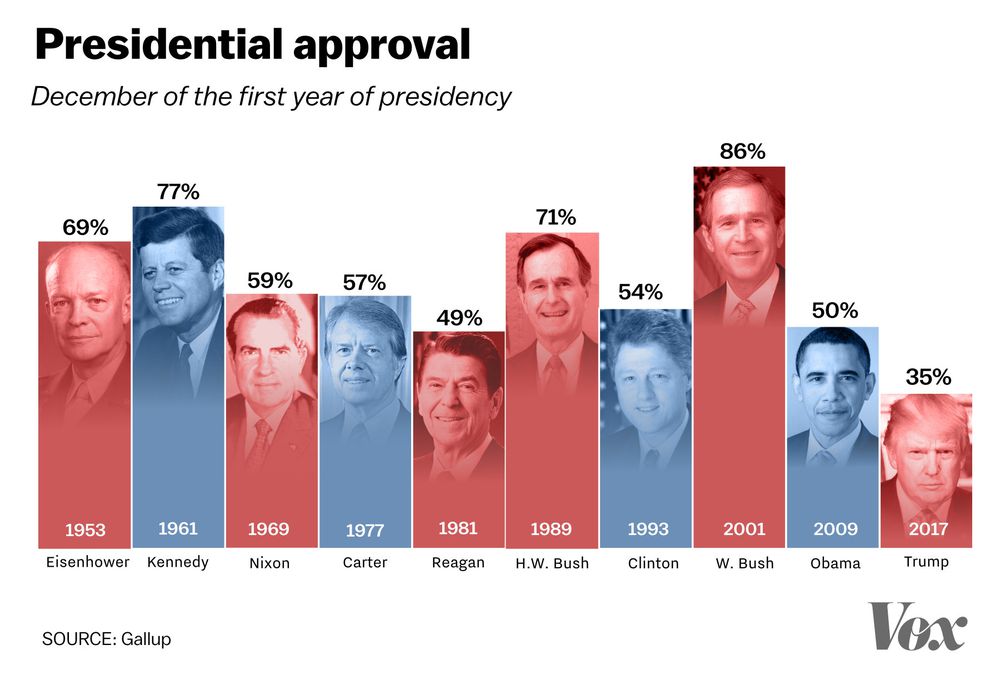 (Keep in mind that Gee Dubya’s December 2001 approval rating was so high only because of the events of Sept. 11, 2001. Americans rallied behind him because they were scared and because they wanted revenge for 9/11.)

I might be more fearful of Pussygrabber’s fascism if his level of popular support weren’t so low. I don’t see Pussygrabber becoming Hitler 2.0 when he is lucky to hit even 40 percent in a nationwide approval poll (in no small part because Pussygrabber is an incredibly bumbling Hitler wannabe).

That said, this nation has serious problems and we couldn’t afford yet another lost year, but that’s what 2017 was, and the only thing that will prevent 2018 from being even yet another lost year entirely is numerous electoral victories this coming November; minimally, we need to take back the U.S. House of Representatives.

Finally, as it’s President’s Day, it’s appropriate to note that the 2018 Presidents and Executive Politics Presidential Greatness Survey (a survey “based on responses from 170 current and recent members of the Presidents and Executive Politics section of the American Political Science Association,” per Politico), which appropriately was released today, lists “President” Pussygrabber dead last among all 44 presidents.***

The “presidential greatness” survey puts Abraham Lincoln at No. 1, George Washington at No. 2, and Franklin Delano Roosevelt at No. 3. (I put Lincoln and FDR in the top three, to be sure, but I’m not sure on Washington; I have the feeling that it largely if not mostly was because he was the first president that he’s so well-regarded.)

In case you were wondering, Barack Obama came in at No. 8 in the survey; he skyrocketed 10 points since the survey was done last, in 2014, when he came in at No. 18. He now sits at one spot above Ronald Reagan, who is at No. 9. (That’s gotta hurt the wingnuts…)

I long have surmised that because Obama was sandwiched between the two worst “presidents” of my lifetime (neither of whom even won the fucking popular vote), Obama, by comparison, would look significantly better than he actually was, at least in the short term.

We’ll see how Obama is regarded in the long term (my prediction is that he’ll drop in the presidential rankings over the coming many years), and yes, to be fair, Pussygrabber has had only one full year in office on which to be evaluated, but no sane person could believe that it’s going to get any significantly better.

*I have been critical of Barack Obama, for whom I voted in 2008 but not in 2012 because of his broken campaign promises (to name just one of them, in 2007 he had promised to support labor unions in person but he didn’t show up once in Wisconsin in 2011 when Repugnican Gov. Scott Walker & Co. decimated Wisconsin’s public-sector unions).

Compared to Pussygrabber, Obama indeed was the second coming of Abraham Lincoln, as he pretty much had portrayed himself to be when he announced his 2008 campaign for president in Springfield, Ill.

It seems to me that the view of Obama having been a great president comes at least as much from how abysmally bad Pussygrabber has been as it comes from whatever actual greatness Obama as president possessed.

**My best guess is that Pussygrabber will decline to run for “re”-election (especially if impeachment actually looks possible right around that time).

I surmise that Pussygrabber had thought that the office would bring him much more adulation than it actually has, and also, I surmise that because he was quite used to being the infallible, unchallengeable boy-emperor of The Trump Organization, he has been deeply disappointed that he couldn’t simply replicate that model as “president” of the United States.

Why serve in heaven when you can reign in hell? Again, I’d be surprised if Pussygrabber truly even wanted a second term.

***Grover Cleveland was president twice in non-consecutive terms. So there have been a total of 45 presidential terms, but a total of 44 individuals have been president.