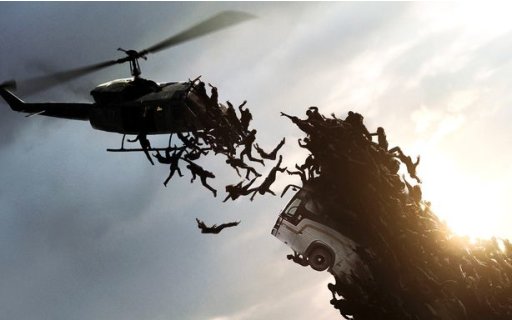 Zombies leap and pile atop each other like angry armies of ants in “World War Z,” produced by and starring Brad Pitt, but despite these impressive visual effects and a plot that has Pitt’s character jetting around the globe, “WWZ” overall is a fairly tepid entry into the zombie genre.

I walked into “World War Z” yesterday with one reviewer having stated that the film does nothing new with the zombie genre but with other reviewers (the majority of them) having stated that it’s an engaging, thrilling summer action movie.

Sadly, in a nutshell, my verdict is that “WWZ,” while watchable enough, does nothing significantly novel with the zombie genre.

I wanted to like “WWZ” more than I did. The zombie genre, done right, can be decent entertainment, and Brad Pitt usually doesn’t do shit. But “WWZ” won’t go down as one of Pitt’s best films or as one of the zombie genre’s best entries.

“WWZ” has some compelling special effects, such as its hordes of fast-moving zombies leaping and piling atop each other like angry armies of ants, but methinks that the proof that’s in the blood pudding is how the individual zombie is portrayed, and “WWZ’s” individual zombies aren’t very frightening, and “WWZ’s” lackluster zombie makeup effects break no new ground in the zombie genre.

Indeed, far from being all that scary, most of “WWZ’s” individual zombies are (from what I can tell) unintentionally fairly funny. (My mate, who sat next to me, laughed throughout the movie, and laughed at scenes that very apparently weren’t intended to be comedic.) The tooth-chattering zombie, the zombie that Pitt’s character interacts with the most, I found to be creepy, but not scary, and zombies are supposed to be scary, especially in a movie that bills itself as a seriously scary zombie movie.

Further speaking of which, from what I can tell, the zombies in “WWZ” have no interest whatsoever in consuming human flesh — no, not even human braaains! — but have interest only in biting non-infected humans in order to spread the zombie virus. Perhaps that’s the best that you can do with a PG-13 rating, but yaaawn!

And while the whole concept of the zombie — a human being that is without a beating heart and thus without circulating blood and thus without any other functioning organs yet somehow nonetheless magically is animated — of course is entirely fantastical and not remotely scientific, it would be nice if “WWZ,” since it presents itself as interested in science and medicine, had strived for more medical and scientific accuracy in its portrayal of the viral-infection process.* (Spoiler alert: The material at the asterisk below is a mild spoiler.)

No virus, for instance, is capable of taking over the entire human body within a matter of seconds, and no virus can replicate without a living host, so of course a zombie, without even a beating heart, could not be a virus factory.

Didn’t early zombie movies just rely on voodoo or some other kind of magic or hocus-pocus as the explanation for zombification? When and why did viral infection become the new, unworkable rationale in the zombie genre?

OK, sure, I suppose, perhaps the fear of a Plague still lingers within the human psyche — large swaths of people have been offed in plagues during the past (and the plague of AIDS is still with us, and new plagues, such as bird and swine flus, have the power to scare us at least a bit today) — but even before “WWZ” we didn’t need another entry in the virally caused zombie genre.

And the “solution” that the heroes in “WWZ” find to deal with the zombies is less than credible and less than thrilling. (It’s so not thrilling that I won’t even bother to go into any detail about it; it would be a “spoiler” not even worth “spoiling.”)

With Brad Pitt’s involvement, you would have thought that “WWZ” would have turned out to be a smarter zombie movie. Instead, “WWZ” screams out for braaains!

That said, “WWZ,” regarded as typically mindless summer action-movie fare, is not entirely unwatchable. It’s just disappointing if you expected something more and something better.

I can forgive Pitt for this lapse — as long as he does not involve himself in a sequel.

P.S. I found BBC America’s “In the Flesh” to be a fairly fresh take on the zombie genre, in case you are interested in feasting on such a fresher take — a take with brains (literally and figuratively).

*Indeed, the movie disappointingly kills off its most scientifically minded character quite early. Are we to take that symbolically as well — that without the scientist further in the movie there will be no further scientific orientation in the movie?