The militarized and highly protected exclusive space station for the rich and over-privileged looms over Earth in the 2013 science-fiction and social-justice film “Elysium.”

It is ironic that in the same week that we finally focus our attention on the fact that the heartless, fascistic, unelected Pussygrabber regime is keeping non-citizen Latino children separated from their parents and in cages, “President” Pussygrabber himself demands that we create a/the “space force.”

Gee, how might militarized space play out in the future?

In the 2013 Neill Blomkamp sci-fi film “Elysium,” the rich and powerful live in luxury on a space station (named Elysium) that orbits above Earth, visible in the sky from the surface of the planet. Below on Earth, we’re shown a desperate population that deals with poverty, pollution, overpopulation, hunger, sickness and disease, crime, shit jobs and general misery.

Most of the action on Earth takes place in a futuristic Los Angeles, which is comprised of a lot of Latinos and which is fully bilingual; our white protagonist, played by Matt Damon, was raised by a Spanish-speaking Latina woman and he speaks Spanish as well as English himself, and his best friend, played by Diego Luna, is Latino, and the woman and her daughter whom he tries to help (the latter is in need of a significant amount of health care that isn’t available to her on Earth, but is readily available to the denizens of Elysium) are Latina.

The miserable residents of Earth, who are kept in line by robot thugs, routinely attempt to reach Elysium via small spacecraft, usually if not only for life-saving medical care, but they much more often than not are shot down by the denizens of the space station before they can reach it; the rabble’s success rate of reaching the militarized and weaponized Elysium is quite small.

Elysium’s security is handled by a heartless Department-of-Homeland-Security-head-type she-Nazi played by Jodie Foster, who apparently was the inspiration for our current, real-life head of Homeland Security.

Elysium’s super-computer recognizes you as a citizen or a non-citizen of Elysium; your citizenship status is all-important, as it determines how (and pretty much even whether) you live. And, again, robot thugs, not unlike the U.S. Border Patrol and other law-enforcement thugs, keep the desperate masses in line for the elite of Elysium.

Admittedly, “Elysium” is a flawed film — for example, at the end of the film we are to believe that the space station, which is tiny compared to the planet, has enough resources to save everyone on Earth — but its set-up and its social commentary are fairly brilliant.

And it’s fairly visionary, because it is the direction in which we already are headed: an over-privileged few have far more than they’ll ever need — and they protect their over-privilege and their overabundance with violence and with the threat of violence — while the masses don’t have enough.

There are solutions to our problems. To name just one solution: birth control. Overpopulation causes so much pain and misery (hunger, homelessness, pollution, overcrowding, the rapid spread of disease, etc.), which is one of the reasons that while I love my Latino peeps, I oppose the backasswards and ultimately evil Catholick church, with its emphasis on its adherents having more and more children and its official prohibition against even contraception (and, of course, abortion).

No, I don’t advocate forced sterilization or forced abortion or anything like that, but I do advocate totally free birth control and totally free sterilization (and totally free abortion [within the first trimester, and later if medically called for]) for those who want it and request it.* The money that we’d pay toward controlling the population would be a drop in the bucket compared to what we spend because we don’t sensibly control our numbers.

We are at a junction where we still can put our collective foot on the brakes and enact policies to stem such preventable problems as even more overpopulation and even more pollution and even more climate change. And, of course, we must oppose the militarization of space, for fuck’s sake.

Or, we can just sit on our collective asses and wait until “President” in Perpetuity Pussygrabber gets his “space force,” which we’ll pay for, of course, and which he and his henchtraitors only will use against the rest of us — “Elysium”-style.

P.S. Slate.com’s Jamelle Bouie wrote a pretty good piece positing that perhaps this time the Pussygrabber regime really has gone too far. In his piece, Bouie concludes (the links are Bouie’s):

… The common thread among each administration official is that they have grossly mischaracterized the situation at the border, hoping to justify their actions by portraying asylum-seekers as vectors of criminality, when they have a legal right to seek asylum, and when their offenses [crossing the border illegally] [usually] are only misdemeanors.

They’ve gotten scant support from fellow Republicans, who seem to see political danger, if not the moral challenge at hand. “The president should immediately end this family separation policy,” said Sen. Ben Sasse of Nebraska in a Facebook post, calling the policy “wicked” and correctly framing it as “a new, discretionary choice.” Many Republicans rightfully fear a backlash at the polls, should the policy continue.

[“Alt-right” Pussygrabber whisperer] Stephen Miller may have successfully trolled his opposition, but like the attempted “Muslim ban,” his weapon of choice is a moral travesty and a political disaster in the making. Instead of bolstering his boss, it may weigh him down with another crisis, jeopardizing his party’s hold on Congress and the administration’s ability to operate with impunity.

We’ll see. I truly had thought that the “Access Hollywood” tape probably would do Pussygrabber in, but for the most part we heard crickets from the Repugnican Party on that one. Now, though, we’re hearing even from the likes of Laura Bush that separating non-citizen children from their parents and keeping them in cages is a shitty fucking thing to do.

Even the perpetrators of this latest evil have admitted, sideways, that it’s evil, because they continue to knowingly falsely blame the Pussygrabber regime’s entirely voluntary policies and procedures on the Democrats.

And Homeland Security head Nazi Kirstjen Nielsen recently proclaimed: “We cannot detain children with their parents. So we must either release both the parents and the children — this is the historic get-out-of-jail-free practice of the previous administration [blame the Democrats!] — or the adult and the minor will be separated as a result of prosecuting the adult.

“Those are the only two options. Surely, it is the beginning of the unraveling of democracy when the body who makes the laws — rather than changing them — asks the body who enforces the laws not to enforce the laws.”

Here we see again the Nazi-like false, propagandistic claim that we have “only two options” (in this case, not separating children from their parents only for the “crime” of illegally entering the U.S. entirely is an option) and the Nazi-like attempt to fall back on “law-and-order” bullshit in order to try to justify doing evil to other human beings.

When the law results in the pain and suffering of innocent human beings, fuck the law. The law is made for and should serve human beings — NOT vice-fucking-versa.

We allow neo-Nazis like “President” Pussygrabber, Attorney General Jeffrey Beauregard Sessions III, Pussygrabber puppeteer Stephen Miller and Homeland Security boss Kirstjen Nielsen to hide behind “law and order” at our own peril; they can try to use “the law” against the rest of us at any time. (First, they came for the undocumented, brown-skinned immigrants…)

P.P.S. Finally, I should note that of course the fictional space station Elysium and “President” Pussygrabber’s proposed Great Wall serve the same purpose: to keep the rich and over-privileged — and mostly white — people safe from having to share any of their (well, “their”) shit with the poorer, often-brown-skinned “others.”**

This is why Pussygrabber’s wall hasn’t faced the backlash that it should have: many, mostly white, Americans are fully on board with protecting — and growing — what they (we) have while others continue to suffer without (and make no mistake: our selfish excess most definitely comes at their loss).

We don’t want to admit that (our selfishness, our materialism, our racism, our xenophobia, our tribalism, our heartlessness, our willful blindness, etc.) outright, so we talk about “law and order” instead in order to try to make our motives appear to be much, much higher than they actually are.

And we call ourselves “Christians.” 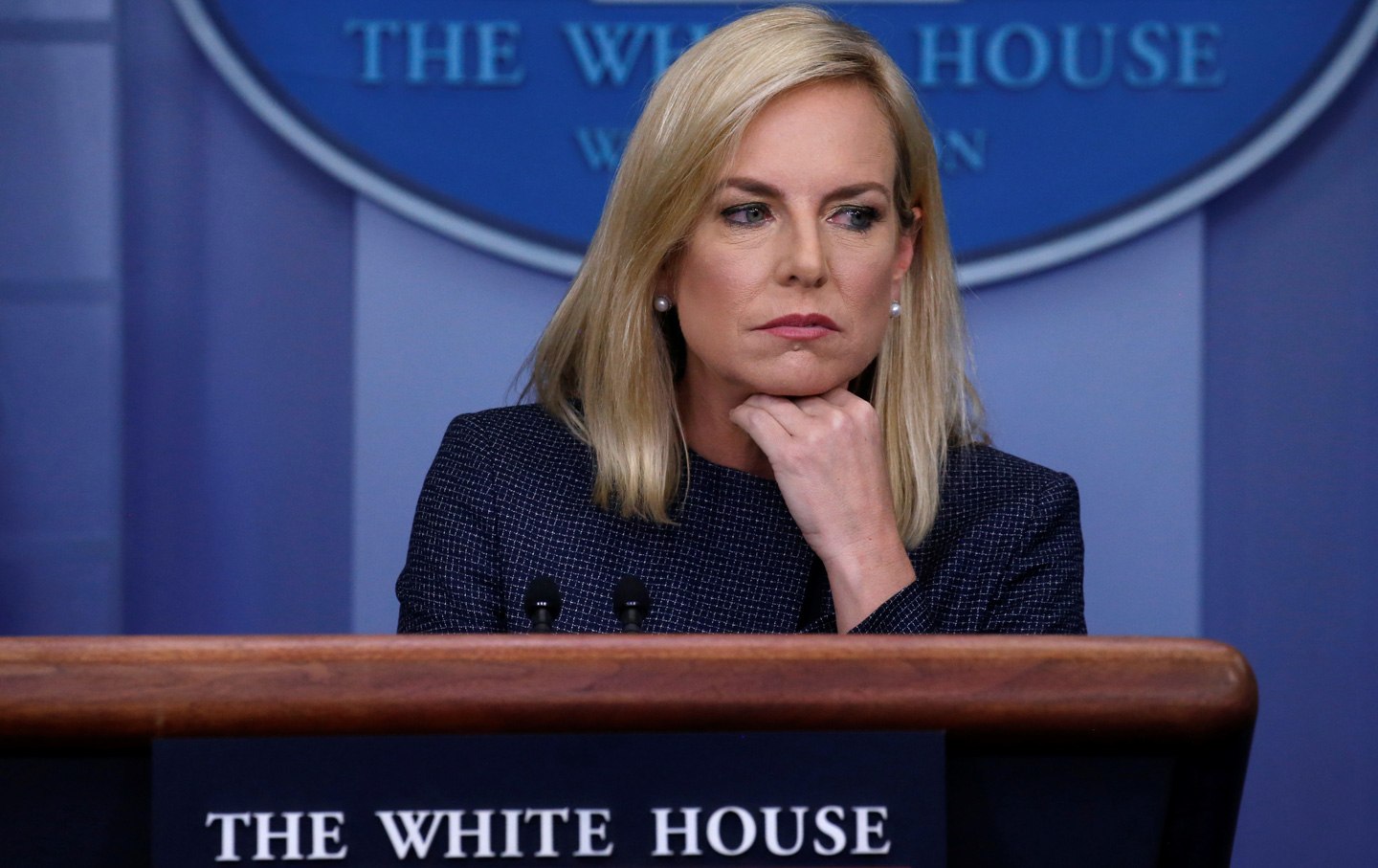 — and here is Jodie Foster as Elysium’s head of security: 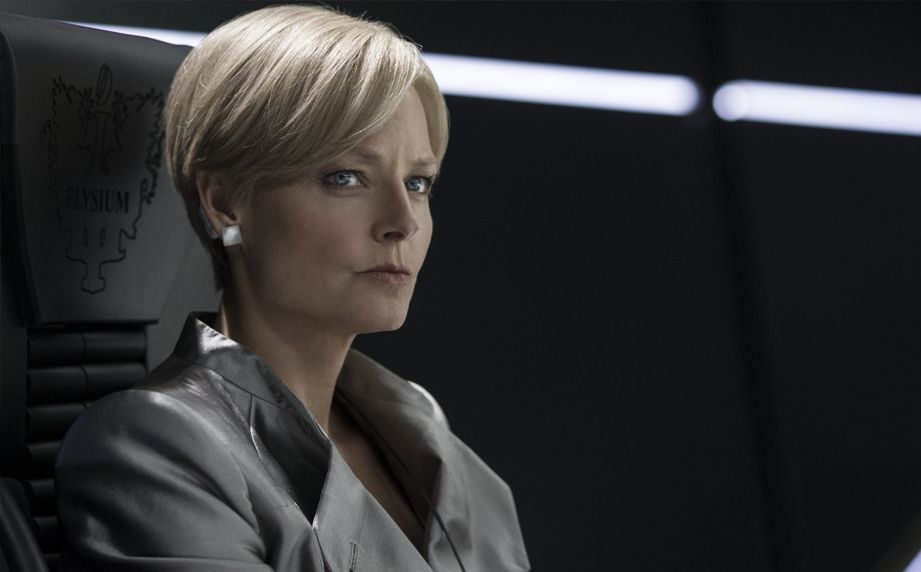 Give Nielsen a haircut and we’re there.

Seriously, though, while there are calls for Nielsen to resign — and I think that she should resign — why would the cadre of stupid white men who gave her her marching orders get to keep their jobs?

Nielsen is nauseating, but all of the Nazis in the occupied White House need to go. Just one token head rolling won’t do, and methinks that a focus on Nielsen’s removal only whiffs of sexism, as much as I don’t want to defend Nielsen in regards to anything.

*No, I don’t advocate paying people to get sterilized or to use contraception or to get an abortion. That would open up a huge ol’ can of worms. But there is no good reason not to provide birth control for free to those who want it, and with a reduced population, or at least with a population whose growth rate is being managed, quality of life for everyone would improve.

And, of course, the Catholick church, which has demonstrated amply how much it truly cares about children, can and should go fuck itself. I see precious little difference between right-wing “Christians” trying to dictate the law for everyone and Sharia law. Both are theofascist.

**In my review of “Elysium” I compared the space station to our gated communities. Of course, Pussygrabber’s Great Wall would just make the entire nation one big gated community.

It’s much easier to build even a ginormous gated community that an exclusive, humongous space station, but hey, with a/the “space force,” maybe a real-life Elysium is in the cards…