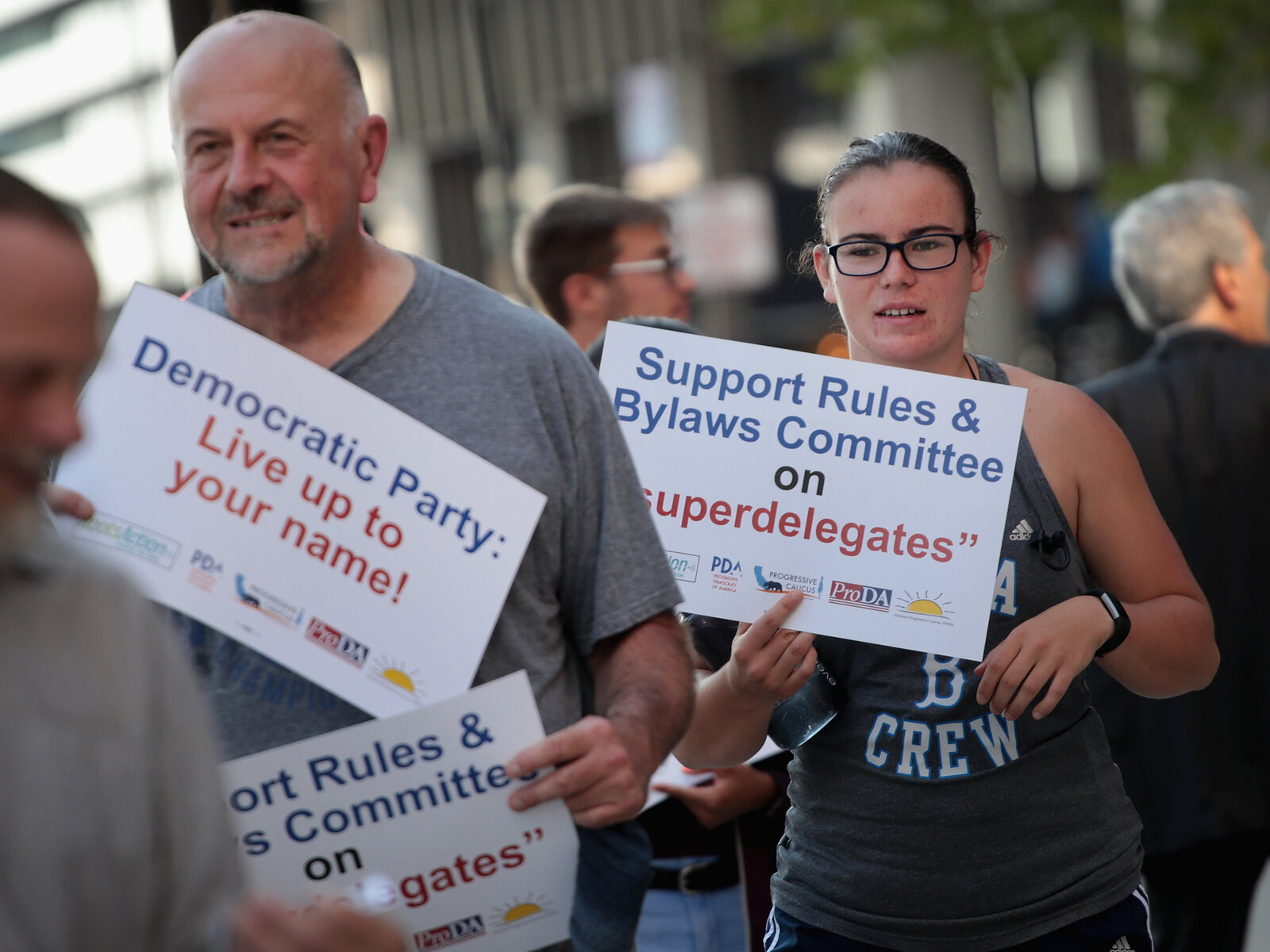 The Democratic National Committee voted yesterday to strip the so-called super-delegates of their anti-democratic power. This means that in 2020, should Bernie Sanders decide to run for president again, the deck won’t again be stacked against him from Day One by constant reports of how many super-delegates, the vast majority of them self-serving party hacks, already have promised to vote at the party convention for an establishmentarian, center-right, Repugnican-Lite, pro-corporate, DINO sellout candidate. (Above: Demonstrators urge the DNC to strip super-delegates of their power at the DNC’s summer meeting that just wrapped up in Chicago.)

The best news for the Democratic Party in a long time came yesterday, when the Democratic National Committee overwhelmingly voted to effectively eliminate the power of the so-called super-delegates.

Against the wishes of a minority of dead-ender DNC assholes who had come to savor the fact that their votes for the presidential nominee have counted much, much more than the votes of us mere peasants, the DNC yesterday demonstrated its new-found realization that if the party wants to save itself, it actually needs to be democratic. (Who knew?)

The party is, however, taking baby steps toward reform. “Saturday’s vote officially [bars] the super-delegates from voting on the first ballot to choose the party’s presidential nominee unless a candidate has secured a majority of the convention using only pledged delegates, whose votes are earned during the primary process,” explains CNN. The super-delegates may vote in a second round of voting if no victor emerges with a majority of delegates in the first round, so while their undue influence has been reduced sharply, the petulant, spoiled babies were thrown some pacifier. (The equivalent of super-delegates in the Repugnican Party must vote the way that the people of their respective states voted, so even the Repugnican Party doesn’t have an anti-democratic, aristocratic system of super-delegates.)

And while I’ve written before that presidential caucuses, which are plagued with irregularities (that is, opportunities for cheating), should be dumped altogether and replaced with presidential primary elections, the DNC yesterday also voted to encourage (again, baby steps) states that still hold caucuses to switch to primary elections, and voted to require states that still hold caucuses to allow some form of absentee participation, given that it’s forever been unfair that those who for whatever reason cannot get to a caucus have not been able to participate in the democratic process.

On that note, McClatchy reported (in an article titled “Loyal Democratic Donors: We’re Done with the DNC Until They Get Their Act Together”) just a few days ago:

While Democratic donors have eagerly opened their wallets ahead of the 2018 midterm elections, helping Democratic candidates and groups largely outraise their Republican counterparts, one notable exception has stood out: The Democratic National Committee — the party’s signature organization — has posted its worst midterm fund raising totals in more than a decade.

By contrast, the Republican National Committee has nearly doubled the DNC’s haul this cycle, bringing in a total of $227 million. And of the six major federal committees of both parties, the DNC has by far the most debt ($6.7 million) and the least amount in its bank account ($7.8 million).

After 2016’s defeat of Democratic nominee Hillary Clinton by Donald Trump, many of the group’s most consistent donors are putting their money elsewhere. A McClatchy analysis found that more than 200 donors who had given more than $1,000 to the DNC in each of the past two midterm elections have failed to pony up any cash to the DNC this time around, despite continuing to support other Democratic groups and candidates. …

Indeed, many if not most ordinary (that is, non-super-wealthy) Democratic donors now give through the wildly successful Democratic fundraising website ActBlue, where they — we — can decide ourselves to which Democratic candidates to give money and how much.

I have given almost $4,500 in a series of donations over the past several years through ActBlue (my average donation is $13) because, frankly, I don’t at all trust the center-right, pro-corporate DNC with my money. (The No. 1 recipient of my donations via ActBlue has been Bernie Sanders, to whom I’ve given more than $1,000, and Elizabeth Warren is at No. 3, with almost $250. At No. 2 [$275] is Kevin de León, who I hope unseats DINO U.S. Sen. Dianne “Cryptkeeper” Feinstein in November.)

“The [DNC’s] poor [fundraising] showing could limit the DNC’s ability to provide support, such as direct financial contributions or get-out-the-vote assistance, to candidates and state parties in November. And it puts them at a disadvantage heading into the 2020 presidential cycle where the committee will play an even larger role,” notes McClatchy, but, again, Democratic candidates are getting money via ActBlue, which is a much more democratic venue anyway. (ActBlue’s home page right now reports that since it began in 2004, it has collected more than $2.5 billion in donations to Democratic candidates and groups.)

With ActBlue, we, the people, decide where to put our money. We can bypass the center-right, pro-corporate, anti-democratic Democratic Party bosses, which is wonderful. And that’s how it should work: If avenues are blocked, then we, the people, must create our own, alternate but equally if not even more effective, routes around the obstacles.

For years and years, the DNC weasels took our support, including our money and our votes, for granted. Where else were we commoners going to go? While the DNC continued to rot in order to preserve the undue power of a relatively few weaselly insiders, we, the people, have been doing our own end runs.

Because the DNC and the party establishment as a whole fell asleep at the wheel years ago, we, the people, took over, such as via ActBlue and by supporting progressive (that is, actually Democratic) candidates whether the center-right, Repugnican-Lite party big-wigs wanted us to or not. (Bernie Sanders, of course, is the largest example of that, but there have been many others.)

It has been a long struggle, and it is not over, but we progressives are taking back the Democratic Party, bit by bit. And when — and if — the DNC can be trusted again, its reputation and thus also its fundraising will improve.

In the meantime, yes, it’s time to look to the 2020 presidential election cycle.

Joe Biden also beats Pussygrabber by 12 points in the Politico/Morning Consult poll, 43 percent to 31 percent, so 2020, it seems to me, could be a lot like 2016 if both Bernie and Biden run; it would be the progressive champion against the party establishmentarian.

However, as Biden already has run for the Democratic Party presidential nomination and lost twice (in 1987 and in 2007), I don’t see him as strong a candidate as some would assert. He would be the anti-Bernie vote, but I don’t think that that would be enough. Also, Billary Clinton was the holdover from the Clinton-Obama years, and wouldn’t Biden, as the holdover from the Clinton-Obama years, remind a lot of voters of Billary’s colossal failure in 2016?

In the Politico/Morning Consult poll Elizabeth Warren comes in a No. 3, still beating Pussygrabber but by a much smaller margin, only 34 percent to 30 percent, with 36 percent undecided.

Billary Clinton was within only a few percentage points over Pussygrabber in the nationwide polling averages for a very long time, all the way up to Election Day, and look how that turned out.

If we want Pussygrabber out, we need to select, as the Democratic Party presidential nominee, the one who polls the best against him; we (well, the Billarybots and other zombies) fucked up big-time in 2016 by passing up Bernie Sanders for the candidate who polled much worse against Pussygrabber than Bernie did.

I’ve noted many times that while I like Liz Warren, and would be fine with her as a vice-presidential candidate, I think that as a presidential candidate she’d be painted as a female Michael Dukakis, another clueless egghead from Massachussetts, and I think that while Billary Clinton did not face much actual sexism, Liz actually would.* (That said, if it’s between Biden and Warren, I pick Warren, who is my No. 2 choice behind Bernie. I still cannot support Biden, not for the primaries.)

Also in the Politico/Morning Consult poll, Pussygrabber beats U.S. Sens. Cory Booker, Kamala Harris and Kirsten Gillibrand, New York Gov. Andrew Cuomo, former Attorney General Eric Holder and others by 2 percentage points to 10 percentage points, so unless their polling improves drastically, these second- and third-tier candidates are non-starters for the 2020 Democratic Party presidential nomination for me, and we can’t allow craven identity politics to sink us in 2020 like they did in 2016.

(“Bernie bro,” “brogressive” and the like only backfired, as Billary wasn’t a victim of sexism, but only suffered appropriately and deservedly due to her utter unlikeability due to her inherently corrupt nature and shitty character, which enough voters sure sensed if they couldn’t articulate.)

Methinks that 2020 is going to be a bumpy ride, with identity politics vs. electability once again rearing its ugly head, but at least the road is made a bit smoother because the so-called super-delegates have been defanged and because quaint but corruptible caucuses apparently are on their way out.

*I agree with fivethirtyeight.com’s Perry Bacon Jr.’s sentiment when he writes:

… How comfortable should we be, as a society, with discouraging members of traditionally marginalized groups from pursuing political office because other Americans might have a negative view of those potential candidates’ gender, race, religion, sexual orientation or other personal characteristics (or some combination of these characteristics)? After all, a candidate can change her ideology if her platform isn’t appealing to voters — but many of these traits are immutable. …

I agree that of course it’s not fair to punish the victim for the voters’ prejudices and biases and bigotry, but when push comes to shove, it does come down to whether or not you want to win the fucking election. In the 2020 presidential election, for a great example, which is more important: booting Pussygrabber from the Oval Office (presuming that he’s still there, of course) or making a point?

And there are plenty of reasons to reject Kamala Harris and Cory Booker that have nothing to do with race, such as their history of coziness with corporations, their lack of leadership and accomplishment in the U.S. Senate, and their lower name recognition and popularity — and thus their lower polling — than the top-three front-runners Bernie Sanders, Joe Biden and Elizabeth Warren.

Of the two, I’m more fond of Harris than of Booker, but she has not been in the Senate for even two full years yet, for fuck’s sake. It’s way too early to talk about her being president. As I have noted before, I think I’d be OK with her as the vice-presidential candidate for 2020, but that’s as far as I can go.

In 2016, aside from the copious intra-party rigging that was done in her favor, apparently the idea was to make Billary Clinton the nominee — even she didn’t poll nearly as well against Pussygrabber as Bernie Sanders did — in order to make a point (namely, that the Democrats could nominate a woman [likability and popularity of said woman entirely aside]). How well did that turn out?

If we make that mistake again, we deserve whatever we get.

And I’m no hypocrite; I personally always have disliked DINO Billary Clinton but love Elizabeth Warren, but if it looks like Warren can’t beat Pussygrabber, then we go with the stronger candidate who can. It won’t be enough for me that Warren is a woman.