Misguided, overzealous people from within their safe spaces in Philadelphia recently decided to add two new stripes to the traditional pride flag in order to represent brown and black people who are non-heterosexual and/or non-gender-conforming.

The “new” pride flag, which I reject and hope is widely rejected, is wrong on many levels. Let me count the ways.

Anyone who has been to a left-of-center protest or demonstration knows the problem of too many groups trying to be seen and heard. It’s fucking selfish and rude and disrespectful for, say, a marijuana-rights group to show up at an anti-war protest, but I’ve seen shit like that. You don’t piggyback onto someone else’s cause in order to promote your own. That is lacking in all class and tact.

There are many good causes and righteous crusades out there, and of course intersectionality is very important. (It is so important that if you don’t know what it is, you should click on that link to find out.) You’ll get no argument otherwise from me.

But how cluttered — and how co-opted — are we going to let the pride flag become?

How are Asian or biracial LGBT people represented by the “new” pride flag? What about the deaf or the blind or the physically and/or mentally disabled or the mentally ill? Where are their stripes? Do the poor get a stripe? The elderly? Jews? Muslims? Atheists? I consider myself to be a socialist; where is the stripe for socialists? (“The red stripe,” I hear you say. Or maybe, “Add a pink stripe!” Shut the fuck up.)

The pride flag always has meant, or at least its significance always has included, diversity, including racial diversity. Remember Jesse Jackson’s National Rainbow Coalition from the 1980s? It exists today as the Rainbow/PUSH Coalition, and here is its logo:

And I remember the first pride-flag bumper stickers of the more homophobic 1990s: “Celebrate diversity,” they proclaimed, because apparently celebrating a vague, gauzy “diversity” was much more acceptable than was celebrating much more specific “gays, lesbians, bisexuals and transgender people.” We had to water it down for the homophobes and heterosexists, you see; we didn’t want our cars to be vandalized or to be the victims of violence.

The “new” pride flag as proposed by our Philadelphian sisters and brothers is too busy and unattractive.* Aesthetically (and we gay men are supposed to be all about great aesthetics!), brown and black don’t belong with the colors of the rainbow any more than does gray or even white (of course, black, white and gray aren’t colors).

And, of course, actual rainbows and prisms don’t display brown or black, for fuck’s sake, but display violet/purple, blue, green, yellow, orange and red. And that’s it.

More colors than those basic six are fabulous — but go get yourself a big ol’ fucking box of crayons and leave the fucking pride flag alone. It has stood the test of time and it doesn’t need your Johnny-come-lately tweaks.

The “new” pride flag is too busy and too unattractive, and I have a real problem with the co-option of the LGBT movement by race-based movements, especially when race-based movements so often in the past have shown nothing but contempt and disrespect for those of us who are LGBT.

Black Americans have been notoriously homophobic, and many Latinos, with their culture of Catholicism and machismo, have been, too. (I’m not saying that Asians have been all that much better, but the black and brown stripes of the “new and improved” pride flag apparently primarily symbolize blacks and Latinos.)

So often have I heard, especially from black Americans, that gay rights are not civil rights. (I once even had one black homophobe venomously tell me, “You can’t compare race to sin!” Another black homophobe once wonderfully lovingly to me referred to being non-heterosexual and/or non-gender-conforming as a possible “birth defect.”) Now, these very same people want on my flag? Oh, fuck no!

These homophobes would have a fucking stroke if the LGBT movement tried to elbow its way into their movements, so why the fuck is it OK for them to encroach upon the LGBT movement? Are we gay people supposed to just bend over and take it up the ass? (Isn’t that what the homophobes and heterosexists always have thought of us? That we’re passive pushovers who are easily steamrolled?)

Again, intersectionality is important. Many of us within the LGBT community not only are non-heterosexual and/or non-gender-conforming, but we’re also not white or we have a disability or some other trait (a physical trait, membership in a minority religion, we’re not a U.S. citizen, etc.) that puts us into another minority group or groups as well. But we can’t put all of the possible permutations of minority status on one fucking flag, each minority group with its own specific, distinctive element.

So: Leave the fucking pride flag alone. It’s fine the way that it is. It doesn’t need your “improvements.”

And: We non-heterosexuals and non-gender-conforming individuals have fought for decades for equal human and civil rights. It was just two years ago later this month that our right to marry whom we love finally was recognized. (No, that constitutional and human right was not “given” to us by generous heterosexuals. Not only did we fight like hell for it, but it always existed, but the homophobes and heterosexists had refused to recognize it — and many of them still do!) And it was just a year ago this month that the largest gun massacre in modern U.S. history was perpetrated — on a gay nightclub in Orlando, Florida.

And: The LGBT movement still has a long way to go; it didn’t end with the long-overdue legal recognition of same-sex marriage in all 50 states two years ago. For example, being non-heterosexual still isn’t a federally protected class. Nor is being non-gender-conforming (although the federal courts in their rulings are starting to view discrimination against the non-gender-conforming and/or the non-heterosexual as a form of sex discrimination, which it is).

So: Perhaps those who are chomping at the bit to co-opt the LGBT movement — I have to surmise that their goal is to minimize it and to push it back into the shadows so that more attention is put on their own special-interest groups — at the very least can wait until we non-heterosexual and/or non-gender-conforming individuals have the same federally protected status that they do before they even think about desecrating our flag.

Update (Monday, June 26, 2017): Today is the two-year anniversary of the U.S. Supreme Court’s ruling that the U.S. Constitution prohibits banning same-sex marriage anywhere in the United States, yet, according to a Pew Research Center survey taken earlier this month, only 51 percent of black Americans support same-sex marriage.

That’s only a few percent more than Repugnicans who support same-sex marriage (47 percent of them).

Yeah, I’m thinking that the Only Black Lives Matter set really needs to stop lecturing us LGBTs on the topic of equal human and civil rights.

That barely half of black Americans support same-sex marriage two years after it was made the law of the land indicates that black homophobia is alive and well. We LGBTs should be demanding to be on their flags, not vice-fucking-versa.

*The original gay pride flag, which debuted in San Francisco (appropriately) in June 1978, looked like this: 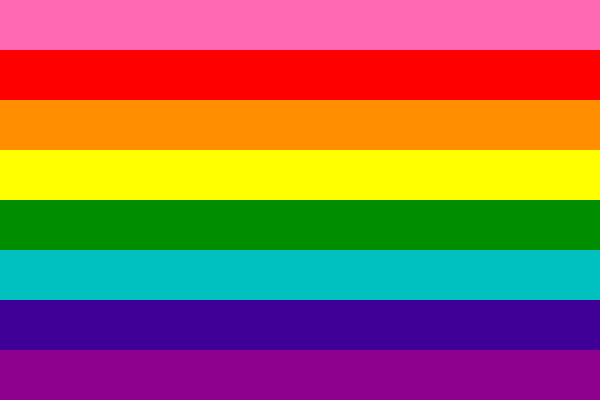 I’m glad that the flag later was altered to delete the pink and the turquoise stripes. I have nothing against pink or turquoise — or brown or black — but the original, eight-striped pride flag was too busy, and the natural spectrum doesn’t have pink (arguably, I suppose, it does have turquoise).

The traditional pride flag is much simpler and cleaner:

This version of the pride flag has been in use since 1979, and again, I, for one, won’t accept its desecration. There is a lot of history and a lot of human pain and suffering behind it, too much history and too much pain and suffering for those who weren’t even alive during all of that to then come along and blithely fucking ruin it in their coddled ignorance and self-centeredness.