Black-rights activists commandeered a progressive forum in Phoenix on Saturday, even taking the microphone from the frustrated moderator, left, while Democratic presidential aspirant Martin O’Malley, right, who had been trying to speak, looks on. This was a bad political move. Those gathered at the event weren’t there to have an outside group take over the event, and those gathered at the progressive forum aren’t the enemy. It was a safe target for a hostile takeover, however, since the attendees at the progressive event didn’t really need the lesson.

So if I understand the “#BernieSoBlack” meme correctly, democratic socialist presidential candidate Bernie Sanders is to be derided because he isn’t black.

Of the five-thus-far announced candidates for the Democratic Party presidential nomination (all of them white), a President Sanders probably would be the best booster of black Americans – probably even better than Barack Obama has been (which isn’t saying all that much, I know [I mean, Obama is great with the rhetoric…]) – but Sanders is to be derided because he isn’t of the “right” race. (Not that that’s racist or anything…)

As I’ve noted, yes, it would be nice if the most progressive presidential candidate weren’t another older white man, as we’ve had more than our fill of older white men in the White House and in other positions of power, but the bottom line with Bernie Sanders is that he is the most progressive presidential candidate that we have today.

It’s not Sanders’ fault that no black (or Latino or Asian or…) American is running for president on the Democratic Party ticket (but hey, black Americans have Ben Carson!), and the demographics of Sanders’ home state of Vermont aren’t exactly his fault, either. (Vermont was about 94 percent white, according to the U.S. Census Bureau’s 2013 estimate.)

Thus far there isn’t a “#BillarySoBlack” meme because, I suppose, Billary Clinton is seen as an extension of Bill Clinton, whom black American writer Toni Morrison in 1998 billed as “the first black president,” even though his “welfare reform,” his support of NAFTA, and his other right-wing, pro-plutocratic and pro-corporate policies harmed, not helped, black Americans as well as Americans in general.

The Clintons are great at saying that they’re on your side; actually acting in your best interests, however, is much more challenging for them (as it has been for Obama).

But, I believe, I get it: Barack Obama is in office for only another year and a half. Statistically speaking, while the door has been at least cracked opened, we probably won’t see another black president any decade soon. If the Repugnicans take back the White House in November 2016, of course Attorney General Loretta Lynch will be replaced, and if the Democrats keep the White House, she may or may not be kept on (I’d like to see her kept on).

Black Americans very apparently are concerned, and rightfully so, that the work that Obama’s Justice Department has started on civil rights won’t be continued after he leaves office. If the Repugnicans regain the White House, of course that work will stop. If the Democrats keep the White House, black Americans want to ensure that they don’t drop the ball.

I could give many more such statistics. Black Americans, by almost every measure, indeed struggle more than the members of any other racial group, and of course institutionalized racism is the largest factor in that. And of course symbolic actions alone, like banning the Confederate flag (while that’s a necessary step), aren’t going to reverse these grim statistics.

As much as these statistics capture the real suffering of real human beings, it disturbs me that mindless, knee-jerk political correctness has driven us to the point that it widely is considered to be quite unseemly to assert these days that all lives matter. Billary Clinton and Martin O’Malley now know this after both of them made the political mistake of recently publicly asserting that “all lives matter,” which very apparently is interpreted by many if not most within the black American community and the black American community’s uber-politically correct supporters to mean that black Americans’ concerns are being minimized by the blithe pronouncement that “all lives matter.”

I know – I’m not supposed to mention Latinos and Asians, because so many of us are addicted to the binary view of race relations, the view that race relations really are only black and white (and black vs. white and vice-versa).

But that’s just not the reality of the United States of America.

The U.S. Census Bureau’s estimates for 2013 are that 62.6 percent of Americans were white only, 17.1 percent were Latino only, 13.2 percent black only, and 5.3 percent Asian only, with the rest being of another race (such as Native American) or of more than one race. The pie graph looks like this: 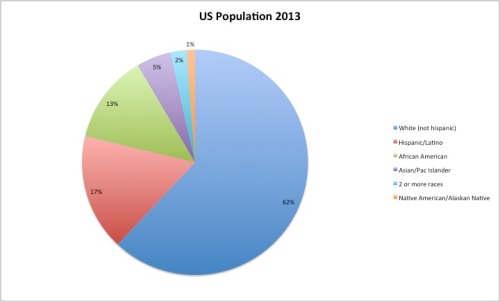 Seeing it graphically helps to give us some perspective, I think. We are a diverse nation, but we also are supposed to be (in my book) a fairly proportionately representative democracy, albeit one that still protects minorities’ equal human and civil rights.

To those who think it’s just awful that Bernie Sanders was born white (as a Jewish American, however, he is a minority [Wikipedia notes that Sanders’ “father was a Jewish immigrant from Poland whose family was killed in the Holocaust, while his mother was born to Jewish parents in New York”]), I’d point out that a solid majority of Americans are white. (And, of course, Jewish Americans weren’t always considered to be white in the United States. And we’ve yet to have a Jewish U.S. president.)

I state this obvious fact (that most Americans still are white) because “Black Lives Matter” so often off-puttingly, offensively comes off as “Only Black Lives Matter” – especially since you get into trouble for asserting that “all lives matter” or even that “black and all lives matter.” Again, black Americans inarguably have it worse, as a racial group, than does any other racial group in the U.S., but black Americans, at 13 percent of the U.S. population, don’t comprise even one in five of all Americans (Latinos, whose numbers in the U.S. overtook blacks’ around 2000, are reaching that point, however).

For such a relatively small piece of the American pie to be demanding political power that is much greater than its actual numbers – such as the apparent demand that Barack Obama be followed only by another black president (even though the only black American who is running for president right now is the unelectable wingnut Ben Carson) – is not only unseemly and undemocratic, but it’s a shitty political tactic.

I can think of no better way to sink your own minority cause than to act like your minority cause is the only cause, or at least, the most important cause.

As a gay man, I’ve long recognized that without the help of our heterosexual allies, we of the non-heterosexual minority never would have achieved same-sex marriage (we still have a long way to go toward full equality, of course).* I’ve never advocated that we non-heterosexuals kiss heterosexual ass or beg for crumbs from the heterosexuals’ table, but at the same time, some political tactics that alienate one’s supporters or would-be supporters – such, as, oh, say, interrupting presidential candidates who are trying to speak to the members of a progressive group, even commandeering the microphone – aren’t smart.

These tactics make you feel good about yourself – you rebel, you! – but they run counter to your own stated objectives. People who already are on your side or who could (have) be(en) on your side now have less respect for you; you have shown that you have no concerns outside of your own immediate concerns for yourself and your own group, and those toxically narrow identity politics don’t work anymore (if they ever did).

And when justifiably aggrieved blacks attack a progressive like Bernie Sanders, isn’t that just because they know that he won’t respond in a vicious, violent way? I mean, are these same people going to even try to similarly crash right-wing events? I much doubt it. So why attack those who already are on your side? Just because you can?

I hope that the “Black Lives Matter” movement continues. It’s vital to keep the issue of police brutality against blacks in the national spotlight. If it’s not, the deaths – the (negligent) homicides and the murders – of black Americans at the hands of the police will continue unabated.

But if the “Black Lives Matter” movement wants to succeed in the long term, it’s going to have to stop attacking allies (because they probably won’t fight back, being allies), and it’s going to have to realize that blacks comprise a minority of Americans, and that there are other oppressed minorities of Americans – and that yes, all lives do matter.

To acknowledge that simple fact is not to dismiss the living hell that the United States of America is for so many of its denizens, a disproportionate number of them black and Latino (and otherwise non-white). To acknowledge that fact is to gain and to keep allies on your side, because as powerful as you think you are, you can’t do it alone. You do need allies in this fight, and that means taking an interest in others’ interests and concerns, too.

Echo chambers are an awful lot of fun, but they don’t bring about a lot of lasting political change.

P.S. I see that long-time Billary Clinton stooge Joan Walsh of Salon.com predictably used the Phoenix incident to try to bash Bernie Sanders and boost Billary (even though Billary, like her hubby, always has been all words and promises but little action), as though Sanders needs a lecture from the DINO-loving Walsh, but vox.com notes that “Hillary Clinton was invited [to speak to the progressive group (Netroots Nation) in Phoenix on Saturday], but declined the invitation.”

At least Bernie showed up. You can’t fuck something up if you can’t even be bothered to be there, can you? No, Queen Billary prefers much more controlled, stage-managed “events.”

And of course Walsh won’t point out that it’s pretty shitty to interrupt and commandeer someone else’s event, no matter how just your cause might be, and that it’s pretty pointless to attack those who already support you — um, how about crashing a police officers’ convention when your main grievance is police brutality? — because that doesn’t fit in with her little narrative.

Some have posited that Billary was behind the crashing of the Netroots Nation in order to try to make her challengers look bad. That doesn’t strike me as impossible.

But after Bill Clinton’s record, anyone who believes that Billary Clinton would be “the first female black president” needs his or her head examined.

Finally, I note that not to be outdone by “Black Lives Matter” in alienating allies based upon toxic identity politics, Joan Walsh gleefully indirectly but surely calls Bernie Sanders’ white-male supporters “bro-cialists” and “bro-gressives” — because to be a white male by definition is shameful and bad, you see — even though about a third of Americans are white males, a group that’s too large for progressives to be able to afford to alienate entirely.

All white males should support Walsh’s DINO candidate, Billary Clinton, you see, simply because Billary is a woman who calls herself a Democrat, or they’re — we’re — to be demeaned as “bro-cialists” and “bro-gressives.” (Har har!)

You know, some might call Joan Walsh a “femi-Nazi.” Not I, of course, but some!

*On that note, on the day that I cast my vote for Barack Obama for president in November 2008 – happy to be able to vote for the first non-white president in U.S. history – 70 percent of California’s black voters voted for Proposition H8, which banned same-sex marriage (which the U.S. Supreme Court just last month ruled is unconstitutional).

Bernie Sanders isn’t one of them.

If all that matters is that our next president is black, then by all means, let’s elect Ben Carson, right-wing lunatic that he is.