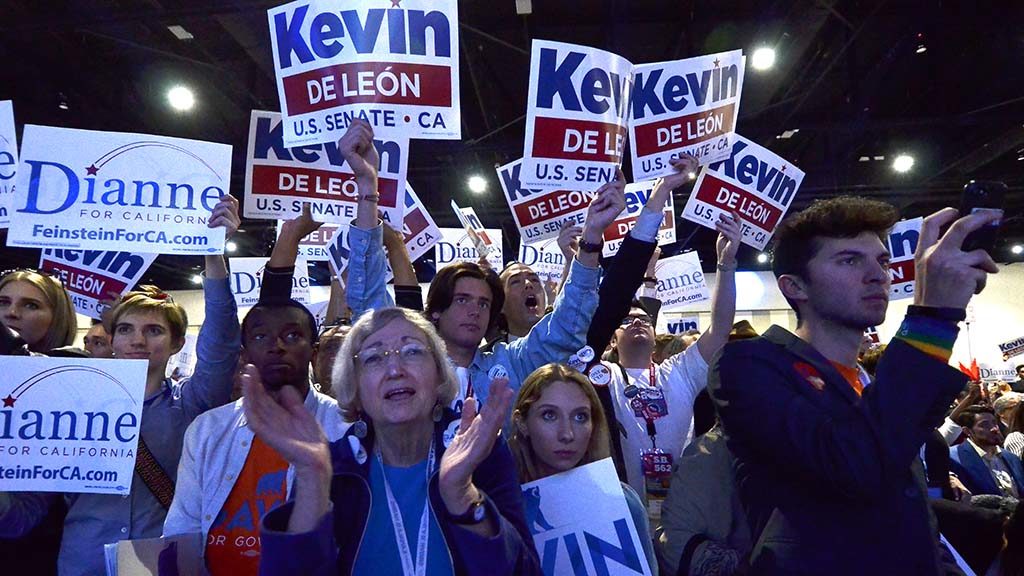 Supporters of new blood Kevin de León and the crusty Dianne “Cryptkeeper” Feinstein appear at the California Democratic Party convention in San Diego in February, where De León fell just short of winning the state party’s endorsement over Cryptkeeper, beating her 54 percent to 37 percent (a super-majority of 60 percent was necessary for the endorsement). De León later finally won the state party’s endorsement last month, beating Cryptkeeper by a vote of 65 percent to 7 percent. It should be more than enough that the state party wants to boot the incumbent Cryptkeeper, but California’s voters haven’t realized that they’ve even had another choice for the past 25 years.

California state Sen. Kevin de León has challenged the crusty U.S. Sen. Dianne Feinstein, who has held on to “her” U.S. Senate seat since 1992, to a series of three televised debates ahead of the November election, but we, the peasants of California, will be lucky if Queen Cryptkeeper deigns to “allow” us to have one.

Yup. Back then, Cryptkeeper faced only Repugnican challengers, and she apparently politically calculated, apparently correctly, that in a deep-blue state she could afford to refuse to participate in any debates.

Times have changed, however. Now, under California’s “top-two” or “jungle” primary system, the top two vote-getters in the primary face off in the November general election, and this time Cryptkeeper’s opponent is another Democrat, not a Repugnican.*

Thus far, Cryptkeeper’s pathetic, laughable excuse for having avoided committing to any debates with De León is that she’ll be too busy in D.C. trying to prevent Brett Kavanaugh from becoming the next U.S. Supreme Court “justice,” something that she’ll probably fail miserably to do anyway, given not only the D.C. Democrats’ failures in a whole host of battles, but also given that the Repugnicans last year cravenly reduced the vote threshold for U.S. Supreme Court confirmation in the U.S. Senate from 60 votes to only a bare majority vote.

The fact is that the addled 85-year-old Cryptkeeper and her handlers know fully well that her ever appearing on a debate stage with the 51-year-old, nimble De León offers more risks than potential rewards.

I’m confident that Cryptkeeper will agree to no debates or only one at the most, perhaps calculating that one debate couldn’t be that damaging (and maybe even calculating that refusing to participate in any debates at all could be damaging).

What might give De León at least a bit of a boost, in addition to Cryptkeeper’s refusal to debate at all or to do poorly in a debate, is that he’s listed first in the statewide voter information guide that will be mailed to every voting household in California, and that the first sentence of his candidate statement is, “I am honored to be the California Democratic Party’s endorsed candidate for the U.S. Senate.”

Yup. Sleepwalking voters inclined automatically to vote for Cryptkeeper again should ask themselves why the state Democratic Party didn’t endorse Cryptkeeper for another six-year term, but instead endorsed De León.

De León is quite correct when he says that “Here in California, we hold elections — not coronations” and that “it’s profoundly disrespectful not to debate before the voters of California,” as Cryptkeeper has done for almost two decades now.

Indeed, the anti-democratic, anti-Democratic and entitled DINO Cryptkeeper reminds me much of the miserably failed DINO Billary “Coronate Me Already” Clinton, who had committed to debate Bernie Sanders (and any other Democratic challengers) 10 times but then casually reneged to debate a final time, as she had promised to do, because she politically calculated that she could get away with it.

I certainly hope that that brazenly broken promise contributed to Billary’s loss. She fucking deserved it.**

And I hope that come November, DINO Cryptkeeper will go the way of DINO Billary: consigned to the dustbin of history, where she belonged many years ago.

*Before California’s voters voted in the “top-two” primary system (known as 2010’s Proposition 14), which was championed by then-Repugnican Gov. Arnold “Baby Daddy” Schwarzenegger, the Repugnicans were guaranteed a spot on the California ballot for the U.S. Senate. No more.

(I’m sure that many don’t remember the history of this and stupidly mistakenly believe that the Democrats engineered shutting Repugnicans from the general-election ballot, when, in fact, it was Repugnican Baby Daddy who pushed for the change.)

**I wouldn’t have voted for or given a penny to DINO Billary anyway, but I believe in holding politicians accountable (call me old-fashioned!), and in my book, reneging on a debate that a candidate already had committed to is a direct reflection of his or her character, and is reason enough not to vote for him or her.