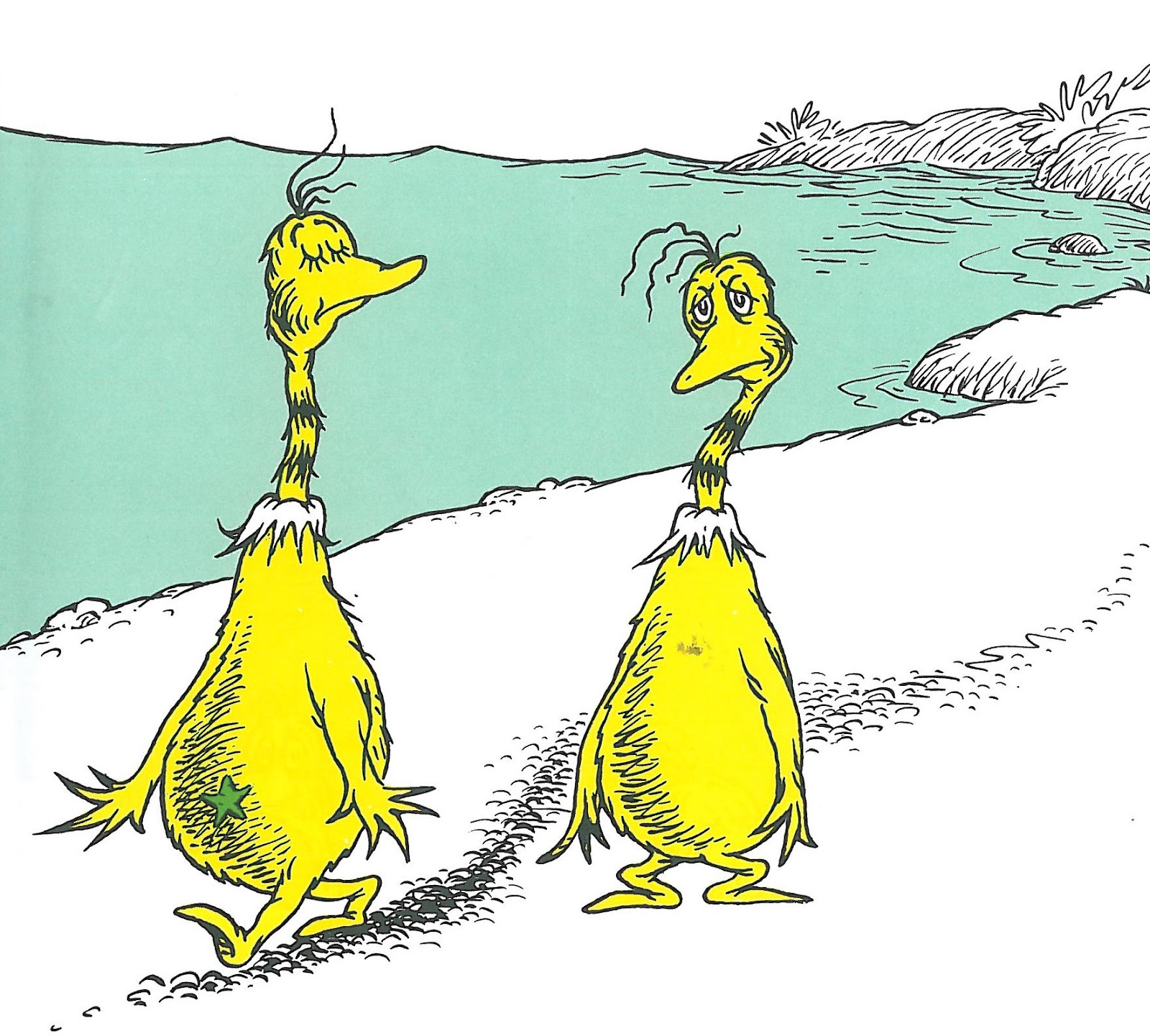 The Sneetches are out in force with the warming weather.

Ah, springtime approaches, which means that it’s time for all of us to emerge from hibernation — and engage in more race wars!

The topic of affirmative action is rearing its ugly head again here in California, and Pretty Boy Paul Ryan is in some trouble (rightfully so) for a blatantly racist remark that he recently made.

In 1996, California’s voters approved Proposition 209, which made affirmative action by the state government, including at the state’s universities, illegal, by writing this prohibition into the state’s Constitution. Of course legal challenges followed, but the courts have upheld the constitutionality of Prop 209, whose language remains in the California Constitution today (if often ignored by those who still practice affirmative action, illegally, in California anyway).

Affirmative action is, I think, for the most part well-intended: to right the wrongs of the past, especially where adverse racial discrimination is concerned.

But, like Communism, affirmative action has looked much better on paper than it has in practicality. Did it ever achieve the equality that it promised it would? Um, yeah, no.

Bullshit, in my book. In my book, racial discrimination, whether intended to harm or to benefit someone, is wrong.

The problem in California is that there are more who want to go to a state college or to a university than there are resources for those individuals. When scarcity arises, people want to start making cuts, but cuts based upon race is not the way to go.

If we truly want to be a post-racial society, then race has to stop mattering. (It will stop mattering — at some vague point in the distant future, the proponents of affirmative action argue. Um, yeah, no. The only time is right now.)

Asian students, for instance, are significantly over-represented in California’s state universities based on the Asian population in the state as a whole. And many if not most Californian Asians oppose the re-legalization of affirmative action in California because a return to a race-based quota system — and that’s what affirmative action creates, no matter what its short-sighted proponents may claim otherwise — would cut their admission numbers drastically. And, of course, many if not most (mostly non-Asian, of course) Californians view these Asian Californians as assholes for appearing to wish to perpetuate their “unfair” advantage.

True fairness and justice have to come on a one-on-one, case-by-case basis, not based upon one’s racial group.

And like Communism was (let me emphasize that I’m talking about big-“C” communism and not about democratic socialism, which I support), affirmative action has been another failed attempt at social engineering. Human beings aren’t lab rats; they, we, are human beings, not some fucking lab experiment.

All Californians who have demonstrated the aptitude for college-level work should have the opportunity to go to college or to a university, regardless of their race. If the problem is that there aren’t enough resources for all of those individuals who wish to do so — and that is the problem here in California — then the solution is to expand that opportunity for everyone of all races by demanding that it be expanded, demanding that our tax dollars stop going towards things like the bloated-beyond-belief military-corporate complex and start going toward actual human needs, not to obscene human greed.

(And, of course, if part of the problem is that our public elementary and high schools are failing too many of our students, and I understand that they are, then we need to tackle that problem, too. [No, for-profit/charter schools are not the answer. Whenever profiteering is the No. 1 goal of any enterprise, that enterprise always will suffer, since profiteering is its main reason for existing at all.] And let’s not blame it all on our public schools; we lazy, selfish Americans are failing our young people as a whole, and it’s not fair for us to blame that on our public schools and their underpaid employees to the degree that we do!)

Should the repeal of Prop 209 it make it to the ballot, I will vote against it and otherwise fight it. Affirmative action is a poorly thought-out practice that takes us further from, not closer to, a truly post-racial society (an ideal that, quite admittedly, we human beings might never meet before we annihilate ourselves).

And then there is former vice presidential candidate Paul Ryan, Repugnican Tea Party U.S. representative from Wisconsin, who recently remarked that here in the United States we have a “tailspin of culture, in our inner cities in particular, of men not working and just generations of men not even thinking about working or learning the value of work.”

“Let’s be clear, when Mr. Ryan says ‘inner city,’ when he says, ‘culture,’ these are simply code words for what he really means: ‘black’,” Lee said in a statement.

(2) That if someone does not want to slave in a minimum-wage job on which he or she cannot even live — and this is the only kind of job that the vast majority of the Repugnican Tea Party traitors want the vast majority of us Americans to be able to have (the Repugnicans and their allies always have opposed even modest increases in the minimum wage, and they vehemently oppose a living wage) — then this means that he or she is “lazy.”

No, this means that he or she simply wishes to be paid the fair value of his or her work, and not be a fucking wage slave in perpetuity.

That’s what this means.

This is how the plutocrats long have defended their theft of our wealth: by calling us, the victims of their theft, “lazy.” Should we commoners point out the simple fact that the plutocrats have been robbing us blind forfuckingever now, the plutocratic traitors among us then accuse us commoners of waging a “class war,” when, in fact, they have been waging a class war forfuckingever in order to maintain their unfair lofty, gilded status. In fact, there is no other way for them to maintain their 1-percent status other than by waging their class war against the rest of us. And they wage this class war against us in a thousand fucking ways every fucking day.

So Paul Ryan told a dual lie: he insinuated that the members of certain races (and while Barbara Lee apparently was looking out for her own racial group, I don’t believe that Ryan was referring only to black Americans) inherently are lazy (a blatantly racist belief, a textbook, dictionary-definition example of a racist belief), when, in fact, because of institutionalized racism and white supremacy since the nation’s inception, some if not many members of the historically-socioeconomically-oppressed-by-the-white-majority groups have to a large degree just given up on chasing the so-called “American dream,” which, should they pursue it, they institutionally are set up by our plutocratic overlords to fail to catch. (And, to be fair, this trap catches most white Americans, too. Too much discussion of race presumes that most white Americans are wealthy when that is not the case, and the national discussion of class has long suffered at least in part because it has been so overshadowed by the national discussion of race.)

Yes, besides his racist lie about one’s level of industriousness being inherent (that is, race-based), Ryan retold the long-running lie that the United States of America is a meritocracy (and not a plutocracy), a system where your hard work actually will get you somewhere.

And, of course, when the far-right likes of Paul Ryan talk about “the value of work,” I cannot help but remember the signs that the Nazis erected above the entrances to their concentration camps: “Arbeit macht frei” — German for “Work makes you free.”

In Nazi Germany, it was the members of the Nazi Party telling their concentration-camp victims that work would set them free.

Today in the U.S., it’s the members of the Repugnican Tea Party assuring their victims that work will set us free.

Of course, it’s never the Nazis or the Repugnican Tea Partiers who are doing the hard work, is it?

And under their thumbs, no matter how hard we should work, we’ll never be free.

Three state senators who previously had been among the two-thirds of the state Senate to vote for putting the repeal of Prop 209 on the ballot reversed their positions and asked Perez not to proceed with issue in the Assembly, where Perez apparently wouldn’t have been able to muster the necessary two-thirds vote anyway.