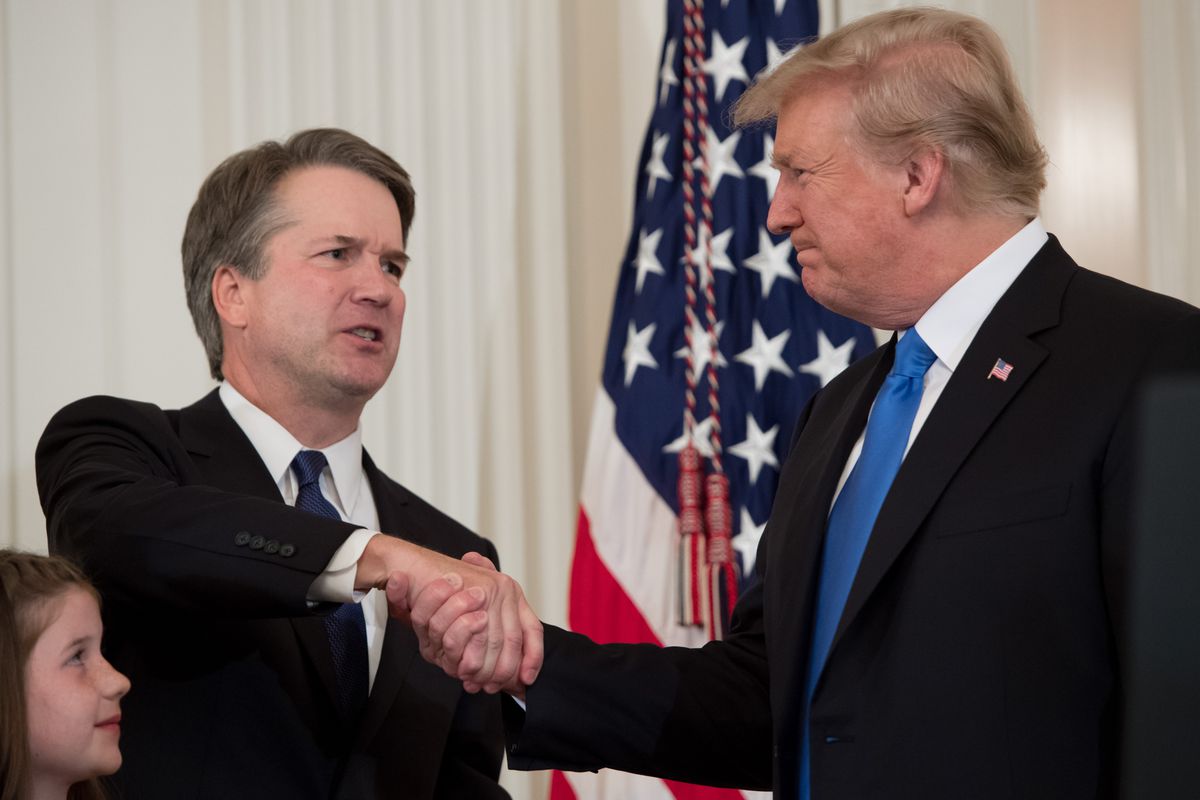 Impeach the scumbag for perjury

Above: Right-wing U.S. Supreme Court “Justice” Clarence Thomas is shown pictured with his wife, Virginia, in 2007. Below: Anita Hill is sworn in before the Judiciary Committee of the U.S. Senate in October 1991. She testified to the committee that Thomas had sexually harassed her on the job, and consequently she was attacked by the right wing as a liar for the left wing. But now, a second woman, Clarence Thomas’ former girlfriend, has come forward to say that Thomas was a serial sexual harasser.

Anita Hill testified, way back in 1991, during his confirmation hearings before the U.S. Senate, that now-U.S. Supreme Court “Justice” Clarence Thomas, who was nominated by George Bush I, was guilty of having committed sexual harassment while on the job.

Hill was villified by the right, and then-right-wing gun-for-hire David Brock even penned a book about her titled The Real Anita Hill — a book that he later admitted was “character assassination” for his right-wing pimps. (Brock now works for the left.)

Now, Thomas’ former girlfriend, 65-year-old Lillian McEwen, says of Thomas’ on-the-job behavior: “He was always actively watching the women he worked with to see if they could be potential partners. It was a hobby of his.”

“In her Senate testimony, Hill, who worked with Thomas at two federal agencies, said that Thomas would make sexual comments to her at work, including references to scenes in hard-core pornographic films,” reports the Washington Post, which also notes that during his confirmation hearings before the U.S. Senate, Thomas said in his “defense”: “If I used that kind of grotesque language with one person, it would seem to me that there would be traces of it throughout the employees who worked closely with me, or the other individuals who heard bits and pieces of it or various levels of it.”

The “logic” there is that if only one person thus far has come forward to report wrongdoing, then that wrongdoing must not have taken place.

Well, now we have two women who have reported the same sexually harassing behavior of Clarence Thomas. Lillian McEwen also told the Washington Post: “The Clarence [Thomas] I know was certainly capable not only of doing the things that Anita Hill said he did, but it would be totally consistent with the way he lived his personal life then.”

Are we to call both of the women liars, as the right wing called the women who had accused Repugnican California Gov. Arnold Schwarzenegger of having sexually harassed them (before he became governor) liars?

That Thomas’ pathetic wife, Viriginia Thomas, recently incredibly inappropriately called Anita Hill (who now is a professor at Brandeis University) essentially to tell Hill to apologize for having “lied” about her piece-of-shit husband’s sexual harassment*– and was incredibly stupid enough to leave her intimidation on Hill’s voicemail  — only underscores the fact that Thomas is guilty as charged of sexual harassment.

Clarence Thomas should be impeached — if not for the sexual harassment itself, then for the fucking perjury, the lying while under oath, that he committed during his confirmation hearings before the U.S. Senate’s Judiciary Committee.

Clarence Thomas must be in some deep shit, or his wife, apparently fearing that her privileged lifestyle is threatened, wouldn’t have made her (perhaps drunken?) phone call to Anita Hill.

And it’s interesting to watch the Repugnican Tea Party claim to be the party that really cares about women and women’s rights and women’s welfare when not only does the Repugnican Tea Party believe that women don’t have the right to determine what goes on inside of their own uteri, but tries to sweep the sexual harassment of women by powerful right-wing men under the red carpet.

*“I just want to reach across the airwaves and the years and ask you to consider something. I would love you to consider an apology sometime and some full explanation of why you did what you did with my husband,” is what Virginia Thomas left on Anita Hill’s voicemail, according to The Los Angeles Times.

“I have no intention of apologizing because I testified truthfully about my experience and I stand by that testimony,” Hill stated in response to Mrs. Thomas’ incredibly inappropriate voicemail message.