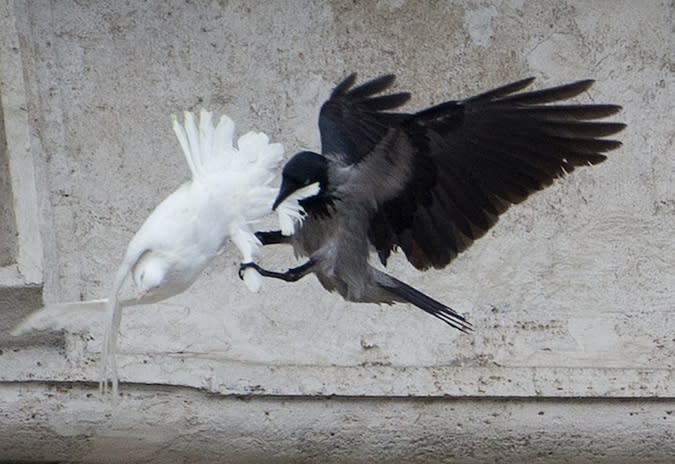 The cliff swallows of Thunder Valley

Blogger’s note: I usually don’t write things like this — I suppose that with my background in journalism, I find these things to be a bit too fluffy — but fuck it; I thought that I’d give it a try…

An illustration of cliff swallows in the wild (click to enlarge)

My boyfriend and I often go out to eat. I suppose that’s what a lot of gay couples do. We’re not rich, but we can afford to dine out, we don’t have to worry about having any kids in tow, and dining out frees up our time from having to go food shopping and having to cook and wash the dishes.

We often go to a casino here in the Sacramento area, called Thunder Valley, that is within 10 minutes’ driving distance from my boyfriend’s apartment. I don’t like Thunder Valley, really, except for its huge internationally themed buffet. (Buffets are killing me, though. I’ve gained at least 30 pounds since I’ve been with my boyfriend for the past two and a half years, with our frequent trips to buffets. Asian buffets, an Indian buffet, Thunder Valley’s buffet…)

A trip through a smoky casino for me is like a trip through hell. Casinos are full of miserable, desperate entities trying to satisfy their insatiable addictions all at once: gambling, smoking, drinking — and yes, overeating at the buffet… If heroin were legal, they’d be shooting up at the casinos, too. (For the record, I’m not a big drinker, I never could be a daily smoker, and as far as gambling is concerned, I don’t even know what I’m doing and I don’t like to do things unless I’m good at them. But hey, you have to eat…)

During our last trip to Thunder Valley for the buffet, about a week ago, I noticed that the birds that build spherical nests of mud under the eaves of a tower that is located at the far end of the casino’s large parking lot were back in force.

“Mud swallows” my boyfriend calls them, but my Internet research shows that they actually are called cliff swallows. They build houses of mud, yes, and “mud swallow” is a more interesting name, but it’s not what they’re actually called. Wikipedia says of the cliff swallow:

Cliff swallows breed in large colonies. They build conical mud nests and lay three to six eggs. The natural nest sites are on cliffs, preferably beneath overhangs, but … man-made structures are now the principal locations for breeding….

European settlement provided many new nest sites on buildings, but the population declined in the late nineteenth and early twentieth centuries as the supply of unpainted barns declined. There has been a subsequent revival as dams and bridges have provided suitable sites.

These are the famous swallows whose return from Villa Ventana, Argentina every year to the Mission San Juan Capistrano in California on (or around) March 19 is celebrated with a festival. In recent years, the swallows have failed to return to the mission.

Like all swallows and martins, cliff swallows subsist primarily on a diet of insects which are caught in flight.

I Googled “cliff swallow Thunder Valley” and I discovered that the three-story tower-like structure at the far end of the parking lot of the casino was built specifically for the swallows (see page 9 of this PDF) — so that they wouldn’t continue to build their nests of mud on the huge casino building itself.

The cliff swallows of Thunder Valley have built dozens of their mud nests on the tower structure built for them in the casino parking lot. The mud nests — which, with their little entrances, remind me a bit of igloos — are so numerous and so close to each other that they indeed form a colony, as Wikipedia referred to, and the swallows’ colony reminded me of the gargantuan apartment complex that my boyfriend lives in not too far away, with hundreds of people all stacked on top of and around each other. (And the stucco exterior of his apartment complex isn’t so different from those nests of dried mud…)

For several minutes my boyfriend and I watched hundreds of the swallows swoop everywhere, leaving the colony in large synchronized groups like fighter pilots on sortees, and then returning to their little mud nests. They reminded me a bit of bats, and the thought crossed my mind that the word guano refers to both the shit of colonies of bats and of colonies of birds. What, exactly, was the mission of the swallows that my boyfriend and I watched leaving and returning to their colony at the casino in waves, I’m not sure; obtaining food for their young, primarily, I’m guessing, and perhaps also retrieving more nest-building material.

I was slightly concerned that with my boyfriend and I watching them right under their colony of nests, perhaps we’d get dive-bombed, as birds protect their young, but the swallows apparently felt safely far away enough from us that we posed no threat to their colony.

I wondered if perhaps the birds are endangered, and that’s why the casino operators didn’t just destroy their nests — which, with a power hose one rather easily could do, I surmise — and which are, admittedly, rather messy to a building, perhaps especially the muddy outlines that are the ruins of old mud nests from breeding seasons past, nests that disintegrated a time ago. But Wikipedia indicates that the birds aren’t endangered, that they have no protected status, so apparently the casino’s main concern has been that the birds just don’t build their rather messy nests on the casino’s main building.

Far from being a nuisance, I found the cliff swallows of Thunder Valley to be the most interesting thing about the casino — and while the tower-like structure in the casino’s parking lot was built for them, they apparently were an unintended part of the casino.

I had instructed my boyfriend to park at the far end of the casino’s parking lot so that we could watch the colony of swallows, and indeed ours was the only car that far out into the parking lot. (People obsessed with gambling, drinking and smoking — and yes, eating — you see, don’t worry too much that they don’t walk enough.) Here are these incredibly cool swallows, just like at San Juan Capistrano, but people don’t go to Thunder Valley for the swallows.

While we human beings embrace our artificial environments, the cliff swallows of Thunder Valley will have none of our artifice. My boyfriend and I noted several artificial nests on the tower-like structure that were put there for them. These man-made nests are located significantly below the natural nests above them immediately under the tower’s eaves, which is where the swallows prefer to nest, more shielded from the elements, and these man-made nests are too geometrically perfect, which is what made me first suspect that they are fake.

When I then noticed the metal strip to which they are affixed to the tower, I definitively knew that they are fake, and my boyfriend and I, to our delight, saw not a single swallow enter or leave a single one of the man-made nests. The swallows would have nothing to do with them.

The cliff swallows, it seems to me, are smarter than are we.

P.S. Video about the 2008 construction of what many call “the world’s biggest birdhouse” at Thunder Valley Casino is here. I find the subtly (or maybe not-too-subtly) anti-environmentalist attitude of the typical casino-goer who is interviewed in the local TV news piece to be typical but to be depressing… Here is some close-up footage of nesting cliff swallows.