In 2024 we must show turncoat Princess Sinema to the door 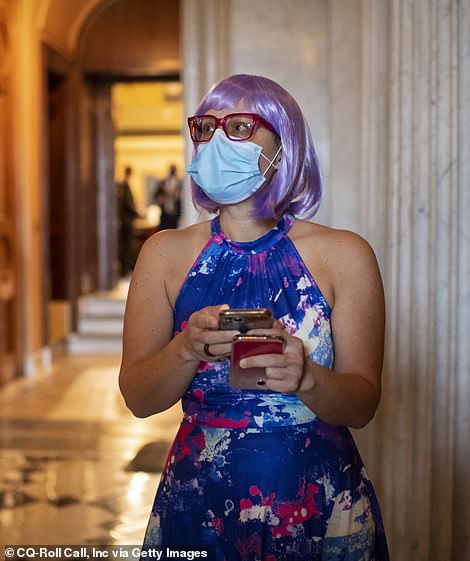 Queen of tackiness “Democratic” U.S. Sen. Kyrsten Sinema — who is approved of by only 8 percent of Arizona’s Democrats and who has just been censured by Arizona’s Democratic Party — makes far more than $15 an hour and has no problem whatsoever voting, so what’s your fucking problem?

I don’t much care what, exactly, is up Sinema’s ass. Some mental illness (a personality disorder at the minimum), I’m guessing, as evidenced by her erratic, teenaged-like behavior and her garish and inappropriate outfits (including anime wigs) for a U.S. senator, but my guess also is that besides working only for her corporate pimps, corporate whore Sinema thinks that she’s cute. (Surprisingly, to my knowledge she didn’t curtsy this time while voting down voting rights.)

Sinema is causing grave damage to the well-being of the United States of America, and so far more important than psychoanalyzing her is removing her, as soon as is possible, from the position of power that she has done nothing but abuse.

So it is gratifying to see that yesterday, the Democratic Party of Arizona finally censured the bitch for refusing to support her own fucking party.

The censure has no immediate practical effect, many news stories have noted.

That’s true in that of course no state’s party organization can remove a sitting elected official, but if your own state party has censured you, be you Repugnican or Democrat, you might have a problem with your next re-election effort.

On that note, what the fuck is Sinema’s long game?

She’s up for re-election in just two years, and only 8 percent of Arizona Democrats approve of the job she’s doing. I don’t see the Arizona Democratic Party supporting Sinema’s re-election, and no, if Sinema went ahead already and officially became the Repugnican that she already is, the Repugnican voters of Arizona won’t vote for former “Democrat” who says she’s bisexual (she’s so cutting edge!) and who, inexplicably, was affiliated with Arizona’s Green Party before she “became” a “Democrat” in 2004.

I don’t see Sinema getting a second term, and you can help make sure that she is relegated to the dustbin of U.S. history, where she belongs. You can donate to the Primary Sinema PAC, as I have done and as I will continue to do.

We must remove Sinema from power — which we can do, given how much Arizona’s Democrats already despise her — and use her lavender-wigged head on a pike (metaphorically speaking, of course…) as an example to others who would run for office on a platform of helping the people and then, once in office, fucking them over royally, princess-style.

P.S. If you think that Princess Sinema’s latest antics are no big deal, know that in refusing to protect voting rights, she is wholly enabling shit like this (this is from The Washington Post):

In the battle over voting rights, an idea is starting to move around in Republican circles: designated police forces designed to hunt down voter fraud. On the basis of available evidence, this is a solution in search of a problem. It is another example of what comes from former president Donald Trump’s false claims about the 2020 election.

Florida Gov. Ron DeSantis (R) has put a proposal for such a force in his new budget. In Georgia, former U.S. senator David Perdue, who is running as a Trumpian candidate in the GOP primary for governor against incumbent Gov. Brian Kemp (R), says he wants something like it to assure that only legal votes are counted.

DeSantis’s new budget calls for $5.7 million for his Office of Election Crimes and Security. The money would pay for 52 staffers, including 20 sworn law enforcement officers and 25 non-sworn investigators, with field offices around the state. The team would go after “election crimes and irregularities” and have the power to refer findings to a statewide prosecutor. …
Former “President” Pussygrabber ludicrously created a “Space Force.” Let’s create a “Voter Fraud Force,” even though voter fraud in the United States of America is nearly nonexistent!
Once you buy the big lie of “voter fraud,” you’ll then accept what the anti-democratic, treasonous Repugnican-fascists obviously want to do next: prevent all voting by mail, so that you must vote in person — and then, just like in the good old days, install jackbooted thugs at polling places to ensure that the “wrong” people don’t vote (in the name of “ensuring election integrity,” of course).
The road to the fascist hell that the treasonous Repugnicans (redundant) so desperately want for the United States of America is paved by the likes of turncoat Kyrsten Sinema.