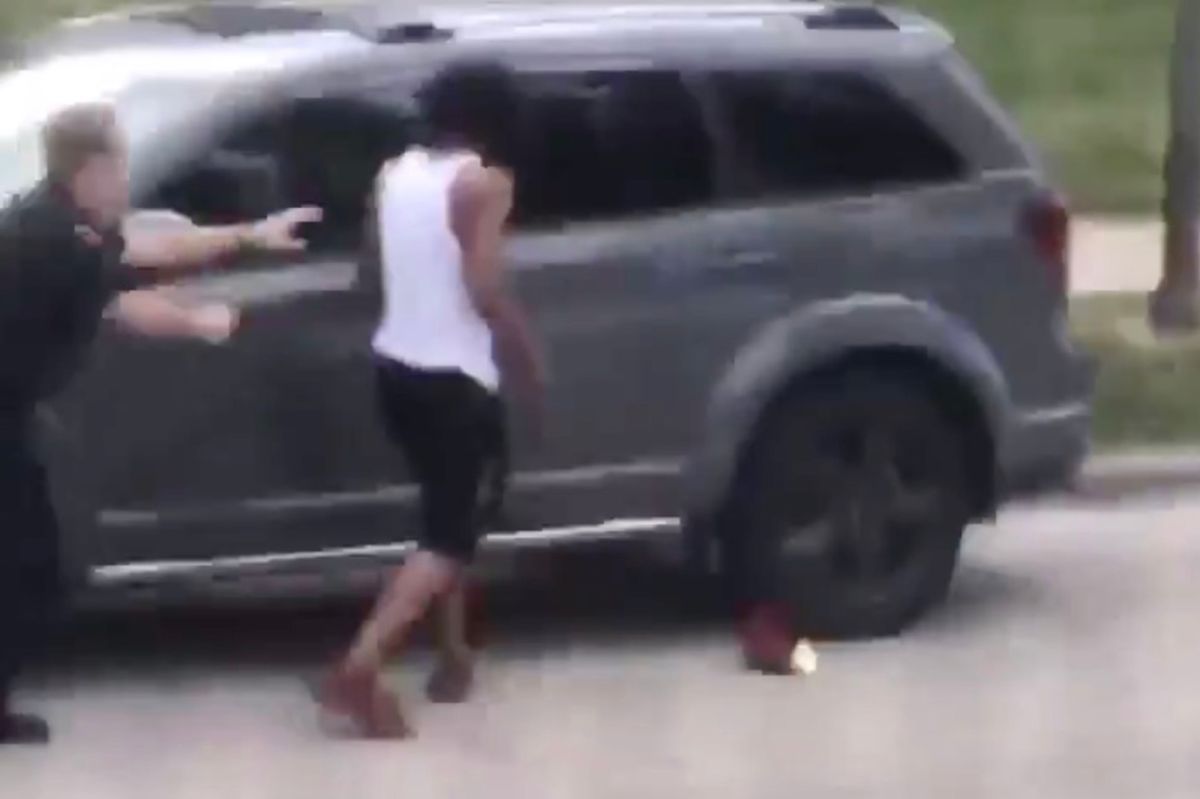 Jacob Blake is shown in a video grab advancing toward the driver’s-side door of a vehicle instead of obeying a law-enforcement command to get down on the ground. A quick moment later, he is shot multiple times. All of this was entirely preventable.

Another day, another police shooting of an unarmed black man (this time yesterday in Kenosha, Wisconsin).

But it’s not entirely that simple, that cut and dry.

First: If a law-enforcement officer gives you a directive, fucking follow it unless it’s an outrageous directive (such as one that might put you in harm’s way or one that’s clearly meant only to demean you [note that your feeling demeaned does not necessarily mean that there was the nefarious intent to demean you]).

The law actually does not say that it’s optional to follow the reasonable directives of law-enforcement officers. (Reasonable directives include showing your driver’s license and/or vehicle registration when asked to do so, stepping out of the vehicle when instructed to do so, and even getting on the ground with your hands behind your back. Your personal definition of “reasonable” might exclude these things, but the law’s definition of “reasonable” does not.)

Nor is an encounter with a law-enforcement officer an invitation to start an impromptu debate about race, including racial profiling; if you believe that your civil rights have been violated, report the incident after the interaction with the officer(s) is over. Get a lawyer if you want to and if you can, and/or reach out to an organization that has dealt with this kind of issue.

Even with my supposed white privilege, never in my lifetime have I ever believed that a law-enforcement officer’s (again, reasonable) directive to me is just a mere suggestion, a tip or a hint.

If we’re all equal, then all of us equally must obey the law when it’s reasonable that we do so; if all of us do so, we can prevent a lot of injury and death and other unfortunate outcomes.

Secondly, before you accuse me of false equivalence, law-enforcement entities really, really, really need to find a way to subdue an uncooperative/non-compliant individual (especially one they believe might do something dangerous) that is not lethal. Pumping someone full of bullets, as we see happen way too often, is beyond bullshit.

From the video of the police shooting that I saw, the black man, whose name is Jacob Blake and who reportedly miraculously is still alive after having been shot way too many times (and who shouldn’t have been shot at all, but who, again, should have been dealt with in a non-lethal manner), could have made the law-enforcement officer(s) fear that he was going for a weapon inside of the vehicle. That, I’m confident, is what the law-enforcement officer(s) will claim was the justification for the shooting.

Why Blake instead opened the driver’s-side door instead eludes me, as does why protesters would then commit the looting, arson and vandalism of property owned by people who had had nothing to do with the shooting. That’s just opportunist criminality. That’s not justice.

I am a progressive and I don’t have great love for law-enforcement officers — the whole “blue lives matter” thing nauseates me, as it’s fucking racist and fascist (and a direct, mostly white-supremacist response to Black Lives Matter), and the “thin blue line” flag reminds me way too much of the Confederate flag; it’s a symbol of right-wing, white-supremacist hostility and hatred (redundant) — but these days we’re seeing extremes: individuals who think that everything and anything that law-enforcement officers do somehow is justifiable, and individuals who think that cooperating with law-enforcement officers at all always is entirely optional, especially if you are black.

Both views are whack.

And, while centrism generally makes me sick (and almost never makes for a good blog post), in this case, centrism might be what’s called for so that there are fewer deaths that were wholly preventable.

We have enough problems already, such as with climate change, the novel coronavirus pandemic and socioeconomic collapse; we don’t need to continue the fucking race war in our streets between non-white civilians and mostly white law-enforcement officers, the latter of whom have the power of the state behind them, which is what gives them that fascist flavor.