Nate Silver: House, Senate and White House ‘all potentially in play’ in 2020 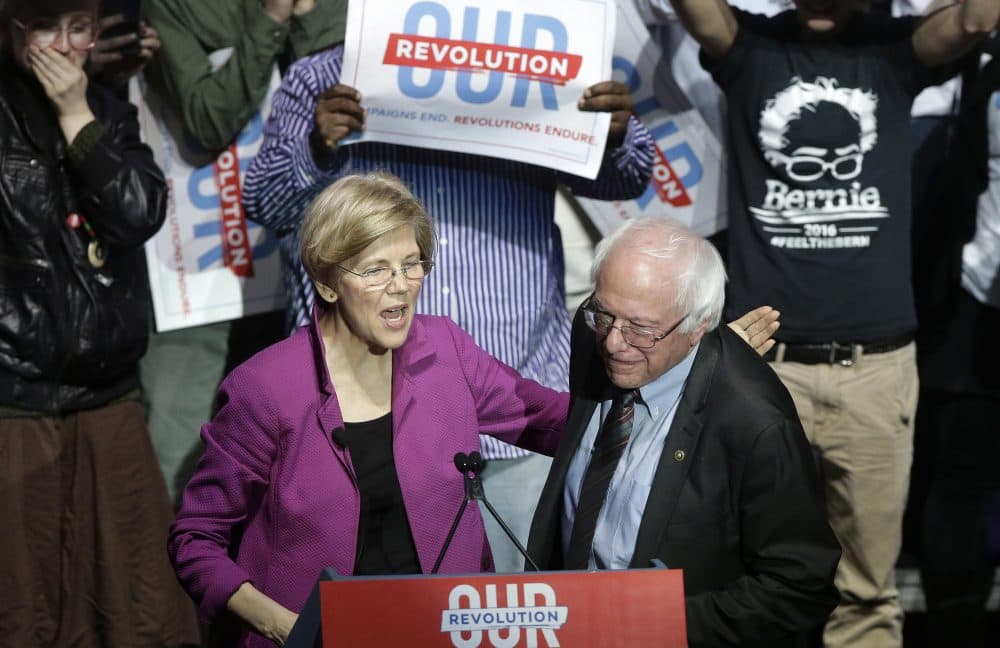 Centrism is dead. Vanilla won’t win in 2020. (Above, progressives Elizabeth Warren and Bernie Sanders appear together at a rally in Boston in April 2017.)

I love comparing “President” Pussygrabber to Richard M. Nixon — they are so much alike (except that Pussygrabber has more money than did Nixon and Nixon had more brains) — so here goes again. Yesterday The Washington Post noted in a piece wonderfully titled “For Democrats, a Midterm Election That Keeps on Giving”:

… Democrats appear poised to pick up between 35 and 40 seats in the House, once the last races are tallied, according to strategists in both parties. That would represent the biggest Democratic gain in the House since the post-Watergate election of 1974, when the party picked up 49 seats three months after Richard M. Nixon resigned the presidency.

Republicans will gain seats in the Senate, but with [Senate] races in Florida and Arizona still to be called, their pre-election majority of 51 seats will end up as low as 52 or as high as 54. Meanwhile, Democrats gained seven governorships, recouping in part losses sustained in 2010 and 2014, and picked up hundreds of state legislative seats, where they had suffered a virtual wipeout in the previous two midterm elections. …

Yup. Under President Barack Obama the Democrats lost the House and the Senate and lost around 1,000 seats in the state legislatures. I chalk that up to the fact that Obama was a caretaker president at most, and that under his “leadership” the party got complacent — no, went to sleep, more accurately.

So there were Democratic gains this past Tuesday, but there is still a lot further to go.

One commentator for The New York Times says that the Dems taking back the Senate in 2020 might not be as easy as we’d like to think; he writes:

That sounds hopeful, if you’re a Democrat. But if you look at the map, you see that most of the Republican-held seats are in states that would elect a dog before they’d elect a Democrat. Louisiana, Oklahoma, Mississippi, Nebraska, Idaho, Wyoming — you get the picture. All told, there are about 14 states where the idea of electing a Democrat to the Senate is all but inconceivable, and another three or four where it’s perhaps not inconceivable but where the stars would need to align just so. The numbers for comparably Democratic states are perhaps 12 and I think zero.

Specifically with respect to 2020, if you had to ponder five possible pickups that would give the Democrats control, here are the states and senators on whom the Democrats need to focus: Susan Collins of Maine; first-termer Joni Ernst of Iowa; Thom Tillis of North Carolina, another first-termer; Cory Gardner of Colorado, a third first-termer; Jon Kyl of Arizona; and I suppose David Perdue of Georgia, or maybe John Cornyn of Texas, should the exciting Beto O’Rourke decide to take him on.

From that list, I trust you can see the problem. If Democrats are having to count on North Carolina (where the party last elected a senator in 2008) and Georgia (2000) and Arizona (1988), they’re barking up an awfully tall tree. …

Well, it’s good not to take wins — and “blue waves” — for granted. But Nate Silver offers this:

… [P]retty much every political battle [from now on] is going to be pitched with an eye toward 2020. And 2020 will be a unique year in that the House, Senate and presidency are all potentially in play.

How the presidency goes is anybody’s guess. But Trump took advantage of the Electoral College last time around, winning the tipping-point state (Wisconsin) by about 1 percentage point even though he lost the popular vote by 2 percentage points. If Trump has the same edge in 2020, that could go a long way toward winning him a second term.

So here’s some slightly scary news for Trump: The 2018 map looked more like 2012 than 2016, with Democrats performing quite well in Wisconsin, Michigan and Pennsylvania, the three states that essentially won Trump the election two years ago. …

Silver states that in 2020 the Senate potentially will be in play. I’ll take that. Again, I won’t take it for granted, but I’ll take it. (I am a bit disappointed to read Silver’s statement that the House that the Dems just recaptured potentially will be in play, too, but, again, it’s best not to take anything for granted, as the Dems learned painfully in November 2016.)

What 2020 prognosticators might miss, methinks, is that in November 2016, while it was clear to me what kind of “president” the vile Pussygrabber would be, it (astoundingly) wasn’t clear to many of those who actually voted for him.

It is clear to many if not most of them now, and Pussygrabber’s approval rating remains stuck around only 40 percent, where it has been stuck for most of the past two years. I don’t see it getting any better; his latest incredibly unhinged “press conference,” in which he made Nixon look like Lincoln by comparison, is indicative of the fact that the next two years won’t be an improvement over the last two.

This can’t bode well for Pussygrabber and the Repugnicans for 2020 beyond the deep-red states whose mouth-breathing, knuckle-dragging denizens don their red “Make America Great Again” caps.

My own dream scenario, of course, is that Bernie Sanders becomes our next president in 2020 and that the Dems win control of both houses of Congress, enabling President Sanders to push through a progressive* agenda starting in January 2021.

Had Bernie won the White House in 2016, he most likely would have faced a divided or a Repugnican-dominated Congress, and this (Repugnicans doing their damnedest to thwart him at every turn) would have been claimed by wingnuts and by worthless centrists to be “proof” that progressivism doesn’t work, and so I’m fine with the four-year delay for Bernie if it means that as president he can get shit done.

P.S. On a related note, I haven’t yet mentioned that I’m delighted that DINO U.S. Sen. Claire McCaskill of Missouri lost her Senate seat on Tuesday. Stubbornly and stupidly unfazed by her defeat, she actually told The New York Times this: “People need to realize my problem wasn’t getting Democrats to vote for me. I hope that no one thinks that because some of the red-state Democrat moderates lost that means we have to nominate a progressive [for the presidency for 2020].”

The Times goes on: “The more sensible answer, Ms. McCaskill said, would be to find Mr. Trump’s political and stylistic opposite, perhaps ‘even a boring candidate.’ She mentioned a handful of little-known senators and governors who exude vanilla.”

Jesus fuck. McCaskill is ultra-vanilla, and look how that turned out for her. She just fucking lost but claims that she has the winning formula! Fuck Ultra-Vanilla McCaskill and fuck former slave state Missouri. We progressives won’t bow down to them.

Pretending to be what you’re not just doesn’t work. Voters want authenticity, not duplicity, which is why genuine asshole Pussygrabber beat inauthentic asshole Billary Clinton, who is a political weather vane on crack.

McCaskill, along with West Virginia U.S. Sen. Joe Manchin** (and some others), should have switched to the Repugnican Party a long time ago. No one respects spineless, middle-of-the-road panderers, which is why centrism — and vanilla — don’t sell.

That’s why McCaskill lost her seat, and why it’s a fucking joke that outgoing Sen. Jeff Flake, who didn’t run for another term because he’s so unpopular in Arizona, says he might run for president. If he does, he’ll do as well as Lincoln Chafee did.

Pick a fucking party and pick a fucking side: Repugnican (evil) or Democrat (good [or at least with the much higher potential of being good]). It has come to that.

*No, I don’t shy away from the word “socialism,” but capitalism will, methinks, be with us for a long time, and in the meantime, the best that we can hope, probably, is to mitigate the serious damage that capitalism causes to people and to the planet through the most progressive policies that we can push through.

**Lest you think that Manchin is beloved in his state, know that thus far he is reported to have won 49.5 percent of the vote to his Repugnican challenger’s 46.3 percent. I venture that if a Libertarian candidate hadn’t also run and thus far garnered 4.2 percent, the Repugnican probably would have won.