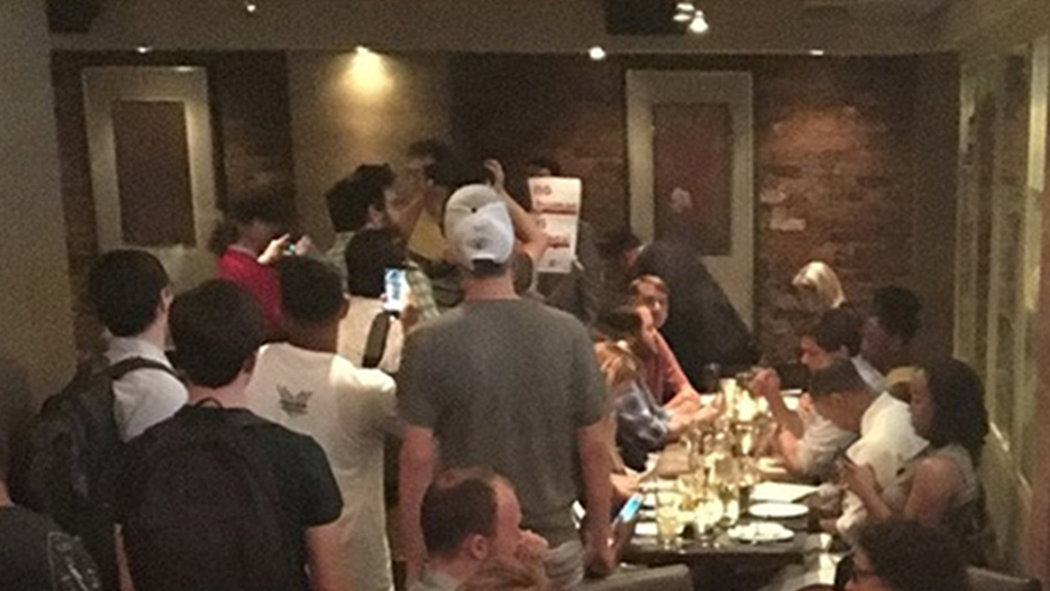 U.S. Department of Homeland Security Secretary Kirstjen Nielsen (the [bleach?] blonde in the back right corner) was heckled out of a Mexican restaurant in Washington, D.C., earlier this month (citizen video of the incident is here). This instance of spontaneous protest probably worked, but the later incident in which Sarah Huckabee Sanders-Goebbels was booted from the Red Hen restaurant in Virginia probably backfired more than it helped.

Don’t get me wrong; I have zero love for “President” Pussygrabber or for the members of his inner circle, including Sarah Huckabee Sanders (who plays the Joseph Goebbels [evil propagandist] role), Kirstjen Nielsen (she plays Heinrich Himmler [he headed the concentration camps]) and Stephen Miller (he plays Hitler whisperer Martin Bormann, although we could compare Miller to Jewish Nazi Emil Maurice, too…).

And when I hear that one of these Nazi reincarnates who populate the unelected, fascist Pussygrabber regime has been heckled, publicly shamed and/or tossed out of a restaurant or driven out of some other public space, I give no fucks. Not for them.

But I have doubts as to whether these tactics work, politically.

For instance, as The New York Time’s Frank Bruni pointed out, the national narrative was about how the unelected, fascistic Pussygrabber regime was locking up children (and even babies) away from their parents. Then, it became all about how poor, poor “good” “Christian” Sarah Huckabee Sanders-Goebbels was asked to leave some restaurant called the Red Hen. (Less sympathy, I think, was given to Kirstjen Nielsen when she was drummed out of a Mexican restaurant. I mean, a Mexican restaurant…)

Nielsen was driven out by loud democratic socialist protesters who wholly understandably objected to her presence there, whereas Huckabee-Goebbels was asked to leave by the owner of the restaurant, who finds her to be morally repugnant, as does anyone who possesses actual morality.

A customer should be asked to leave a place of business that is open to the public, it seems to me, only if he or she is behaving inappropriately and/or perhaps if his or her presence at the business, probably due to fame or to notoriety, actually is interfering with the business’ ability to do business. (A customer who attracts a rowdy crowd, for instance, ultimately could be the cause of property damage and/or injury and/or violence, for instance.)

Huckabee-Goebbels will go to hell if there is a hell, but I’ve seen no reports that she was doing something at that restaurant that a customer at a restaurant wouldn’t or shouldn’t be doing, or that her presence was causing a real problem for the restaurant in terms of safety or order.

I wouldn’t want to be asked to leave a place of business and/or refused service because I was, say, wearing a “Bernie for President” T-shirt — for my political orientation. That would, I think, be wrong.

There is no comparison between the two political ideologies, and mindless comparisons of Bernie Sanders’ brand of populism to “President” Pussygrabber’s brand of “populism” — often made by establishmentarian, center-right, Repugnican-Lite “Democratic” fuckwads who find Bernie to pose a threat to their political and personal power as sellouts — rankle the fuck out of me.

Fascism must be fought — the Germans didn’t fight the fascism that was rising in their nation, and look how that turned out — which is why I can’t be mad at the hecklers and the public-shamers.

But for vile, victimizing individuals like Sarah Huckabee Sanders-Goebbels to even be able to pretend publicly to be victims themselves is something that we very probably should not allow.

Let the Nazis eat at restaurants if they are not being disruptive. Maybe, just maybe, they’ll choke to death, and we certainly don’t want to hand them, on a silver platter, the gift of their then cravenly using their own faux victimization for their own sick and fucking twisted political gain.