This is a still from a “President” Pussygrabber “re”-“election” video ad of murder defendant Luis Brocamontes, who is the new Willie Horton. Brocamontes very apparently is significantly to severely mentally ill, so I don’t know that I’d call him “evil,” since to me to be evil is to have full knowledge and understanding of what you’re doing. Knowingly demonizing minority groups for personal and political gain, however — that is evil, evil that was perfected by the Nazis and that has found resurgence under the unelected, fascist Pussygrabber regime.

“President” Pussygrabber’s handlers just released a 30-second “re”-“election” ad on YouTube featuring the case of an undocumented immigrant from Mexico who is accused of having shot to death two Sacramento-area law-enforcement officers in 2014.

The undocumented immigrant, Luis Bracamontes, 37, who keeps having outbursts during his current trial, appears to me to be quite mentally ill, but nonetheless he can be used for right-wing, white-supremacist, racist political purposes, Willie-Horton style.

The Nazi-like, irrational-fear-based and racist propaganda here is that all undocumented immigrants from Mexico and elsewhere in Latin America are criminals, and they could get you next!

We’re to wholly ignore the right-wing, white-male American citizens (that is, Pussygrabber’s fucking base) who are killers, you see. They’re certainly not representative of their group! No, they are anomalous bad apples!

James Alex Fields Jr., the 21-year-old, white-male, right-wing American citizen who rammed his car into a group of counter-demonstrators during the white-supremacist “Unite the Right” rally in Charlottesville, Virginia, in August, killing 32-year-old Heather Heyer and injuring 19 others, for example; “President” Pussygrabber proclaimed that at that conflict in Charlottesville, there were “very fine people on both sides.”

While I’m not much worried about ever being murdered by anyone, I am much more concerned about the right-wing, white-male, Pussygrabber-voting domestic terrorists among us than I am of the supposed hordes of murderers from Mexico. I have lived in the border states of California and Arizona for my entire life of almost five decades, and not once have I been the victim of violence by a Latino, whether a citizen or not.

In fact, as Vox.com pointed out after the largest gun massacre in U.S. history (perpetrated by a white-male U.S. citizen, of course) took place in Las Vegas in October, “more Americans have been killed in attacks by white American men with no connection to Islam than by Muslim terrorists or foreigners.”

Vox.com continues: “… the average likelihood of an American being killed in a terrorist attack in which an immigrant participated in any given year is one in 3.6 million — even including the 9/11 deaths.

“The average American is more likely to die from their own clothing or a toddler with a gun than an immigrant terrorist. But we’re not banning guns and T-shirts from coming into the country. …”

The enemy — the Pussygrabber-voting neo-Nazis among us — is within, not from without.

Yet here is the unelected, fascist Pussygrabber regime, which encourages violence by right-wing white men, having the audacity to claim in its aforementioned “re”-“election” video ad that “Democrats who stand in our way [of demonizing brown-skinned immigrants from south of the border] will be complicit in every murder committed by illegal immigrants.”

Quite similarly, the Pussygrabber regime shamelessly immediately used for divisive political gain the case of the shooting of Kathryn Steinle, who very apparently was shot accidentally by an undocumented immigrant from Mexico in San Francisco in 2015.

Pussygrabber and his henchweasels repeatedly used the Steinle case for their own racist political gain, but the brown-skinned bogeyman they tried to create, Steinle’s shooter, in November was acquitted by a jury of all murder and manslaughter charges, and was convicted only of being a felon in possession of a firearm.

The Steinle case was unfortunate and tragic, to be sure. But it was no accurate statement on the propensity of all undocumented immigrants from Mexico and elsewhere in Latin America to commit serious crimes. In fact, as The Washington Post reports:

… [S]ome studies have shown that immigrants, including those here illegally, commit crimes at lower rates than do native-born Americans.

As The Washington Post’s Fact Checker reported in 2015, one study showed that between 1990 and 2013, “the foreign-born share of the U.S. population grew from 7.9 percent to 13.1 percent and the number of unauthorized immigrants more than tripled from 3.5 million to 11.2 million.

The violent crime rate was cut nearly by half during a period in which unauthorized immigrants tripled, according to the council. …

So Steinle’s death was not ruled as murder or even as manslaughter by a jury, and Luis Bracamontes very apparently is significantly to severely mentally ill.

But we’ll ignore these facts because they’re inconvenient to our right-wing, fascist, racist, nationalist arguments, and we’ll focus instead on skin color and national origin.

These are the tactics that the Nazis used: demonizing some (usually relatively politically powerless) groups while pretending that one’s own group is incapable of committing any wrong.

The only “complicity” that one could commit here would be allowing Nazism 2.0 to continue to grow in the United States of America without saying a word or otherwise doing anything about it.

The illegitimate “President” Pussygrabber and his fellow neo-Nazi supporters must be countered just as the Nazis had to be countered.

P.S. To be clear, as the facts (not the Nazi-like “alternative facts”) show, this is much more representative of the actual face of terror: 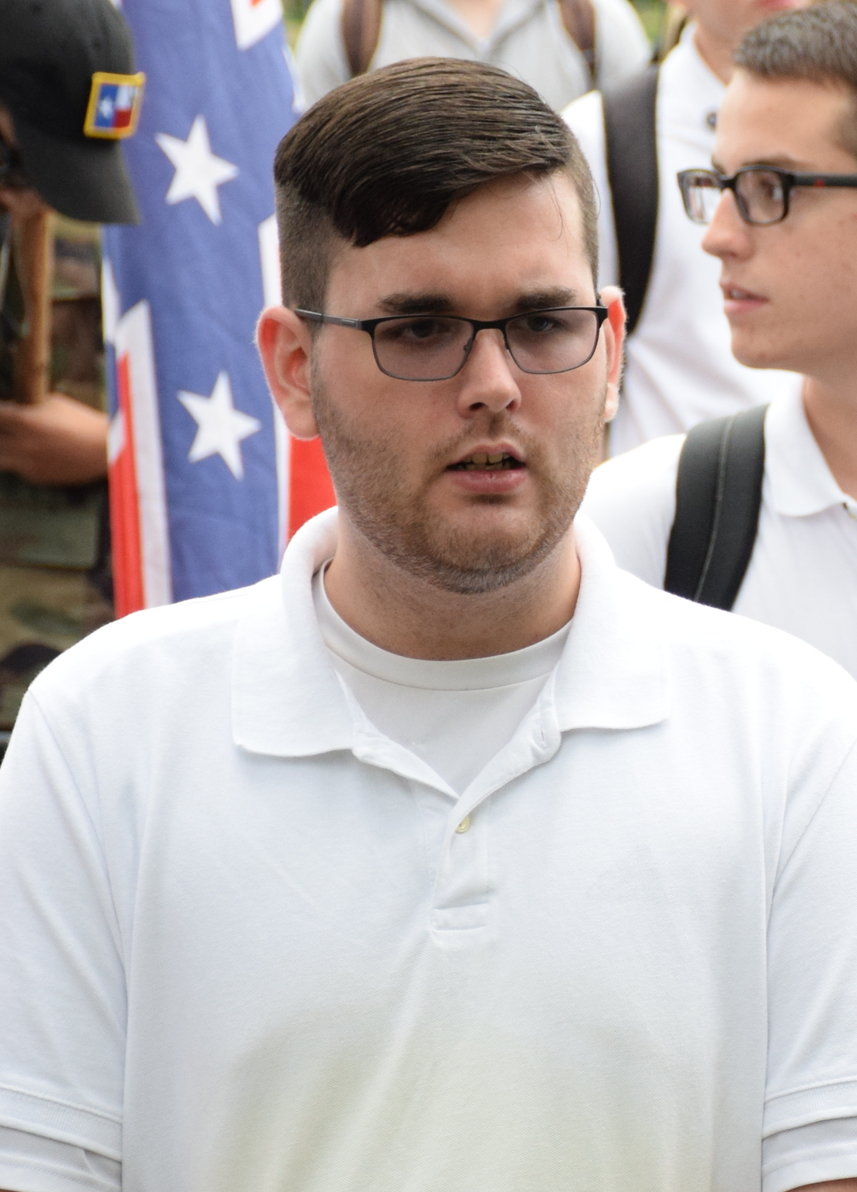 That’s a picture of neo-Nazi James Alex Fields Jr. on the same day in August that he rammed his car into a group of people whose political views with which he doesn’t agree.

I’d take 1,000 undocumented immigrants over just one neo-Nazi, Pussygrabber-loving piece of shit like this.