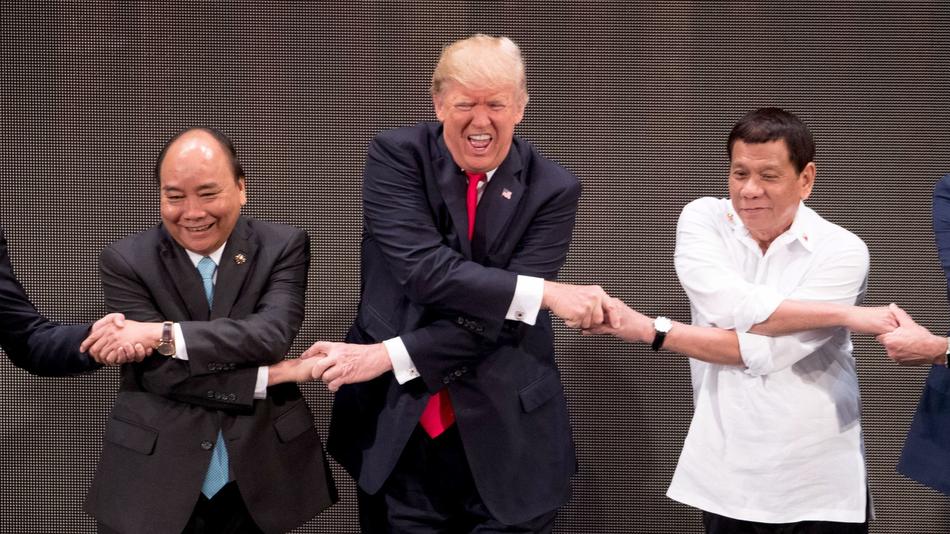 “President” Pussygrabber’s approval rating is so low (below 40 percent in reputable nationwide polls) that he has to cherry-pick from the outlying polls that give him the best results. The good news is that low presidential approval ratings usually mean bad news for the president’s party in the mid-term elections.

“President” Pussygrabber claims that his approval rating is at a whopping 46 percent, because Rasmussen, which Business Insider says is “the polling company often most favorable to the president,” puts it there.*

My favorite polling outfit is Gallup (which fivethirtyeight.com gives a B-), probably because of Gallup’s frequent polling on Trump’s approval rating, which as I type this sentence Gallup puts at 38 percent.

Probably the most accurate way to get a sense of where things actually stand is to look at the averages of several reputable polls. Fivethirtyeight.com’s average of reputable presidential-approval polls, for instance, right now puts Pussygrabber at 38.1 percent.

So it’s accurate to say that reputable nationwide polls have “President” Pussygrabber stuck below 40 percent, as he has been for some time now.

You won’t hear Pussygrabber talk about Quinnipiac’s latest poll, which puts his approval rating at only 35 percent, or the latest Pew poll, which put him at an even worse 34 percent. Even if those two polls are unflattering outliers, they still very apparently are pretty close to the actual number, which I’d put at 38 percent (or at 38.5 percent, only to be generous).

It is true that the official Democratic Party still flounders, in no tiny part because it’s chock full of old has-beens who refuse to step aside and allow the infusion of fresh blood that the calcified party so desperately needs.**

But with an approval rating stuck below 40 percent — indeed, the highest that Pussygrabber ever hit in Gallup’s polling since he took office in January was 46 percent*** — I don’t see how the Repugnicans can keep both the Senate and the House after the 2018 mid-terms.

In the mid-term elections I expect the Dems to take back the Senate or the House, maybe even both (but probably they’ll take back just the Senate, it seems to me, especially since it looks like Alabama is about to get a Democratic U.S. senator, and there is even speculation that one or even both of Arizona’s senate seats could flip blue, if John McCainosaurus’ seat comes open [my money would be on only one of the seats flipping blue; Arizona is a bit purplish but still is a lot more on the red side than on the blue side]).

Never underestimate the establishmentarian Dems’ ability to snatch defeat from the jaws of victory, but with Pussygrabber’s low approval rating right out of the gate, I don’t see the mid-terms going well for the Repugnicans.

No, we shouldn’t take too much from the Dems’ electoral victories of last week, which are but a drop in the bucket toward recovering the Democratic seats that were lost during the Obama years of political sloth and squander, but something tells me that the pundits are low-balling the Dems’ prospects in the mid-terms. I mean, again, Pussygrabber’s approval ratings have been stubbornly stuck below 40 percent for many months now.

That and many, many actually Democratic and Democratic-leaning voters have been ignoring the less-than-useless Democratic Party establishment and have been doing it their own way for a while now. Indeed, all Dems were “supposed” to just shut up and coronate Billary Clinton like good little lemmings, but democratic socialist Bernie Sanders won 22 states and 46 percent of the pledged/democratically earned delegates in the 2016 presidential primary elections and caucuses.

That’s one reason why the talk of what happened in 2016 won’t go away: because Bernie Sanders pretty much came from nowhere and did quite well against a center-right, pro-corporate establishment favorite who was in her second race for the White House. It was a stunning achievement that in my book the collective still hasn’t recognized.

(It wasn’t supposed to happen and so the Democratic lemmings have just pretended that Bernie didn’t even run, you see. Many if not most of them won’t even utter his name, perhaps especially when the discussion is potential presidential contenders for 2020.)

So Pussygrabber’s low approval rating and the fact that we real Democrats know by now that we have to do an end-run around the clueless, self-serving, ineffectual “Democratic” establishment could mean, and probably will mean, that the Repugnicans won’t control the Senate and the House come January 2019.

Sadly, what it’s going to take for the “Democratic” old guard to finally go the fuck away is their incapacitation, by death or by other manners. (The octogenarian multi-millionaire Sen. Dianne “Cryptkeeper” Feinstein is a stellar example of this.)

But I find hope in the flexibility and the resourcefulness of us progressives. Like water, when something impedes our path, we tend to flow around it, and we are great at having the patience to wear shit down over time, like water created the Grand Canyon.

P.S. “President” Pussygrabber characteristically tweeted that “Some people think [that his approval] numbers could be in the 50’s [sic].” That’s fucking hilarious.

Some mouth-breathing, MAGA-cap-wearing fucktards could think that his numbers are in the 90s.

They would be dead fucking wrong, as his actual numbers are in the upper 30s. SAD!

… How bad is it for Republicans if [Democrat Doug] Jones wins [the U.S. Senate seat for Alabama next month]? It’s really bad. Having Jones in office would reduce the GOP margin in the Senate to 51-49, meaning that Republicans could afford only one defection on legislation such as tax reform. For example, if both Republican Sen. Susan Collins of Maine and Republican Sen. Lisa Murkowski of Alaska opposed a bill and everyone else voted along party lines, it would fail by one vote.

Moreover, whoever wins the special election will serve out the remainder of former Sen. Jeff Sessions’s term, which runs through January 2021. Having Jones in office already would make it considerably easier for Democrats to win the Senate in the 2018 midterms: With a win banked in Alabama, flipping Flake’s open seat in Arizona and Republican Sen. Dean Heller’s in Nevada would be enough to put Democrats in control of the Senate — provided (and it’s a big provision) that Democrats didn’t lose any of their own seats.

To play devil’s advocate: One could argue that control of the Senate in 2019 and 2020 isn’t all that high-stakes. Because there are so few Republican-held seats up for election next year in that chamber, winning control of the Senate is a tougher proposition for Democrats than is taking the House. So, if Democrats somehow win the Senate, they’ll probably already have won the House — and will already be able to block President Trump and Republicans from passing key legislation. [Emphasis mine.]

So I’d posited that it would be easier for the Dems to take back the Senate than the House in the 2018 mid-term elections, but prognosticator-god Nate Silver says that it’s the other way around. I trust his analysis.

The Dems need only take back one of the two houses, though, to stop the unelected Pussygrabber regime’s right-wing agenda. Taking both houses would be great, but I’ll take one of the two.

*To be clear, Rasmussen put Pussygrabber’s approval rating at 46 percent yesterday and put it at 44 percent today.

**This “Saturday Night Live” sketch is pretty spot-on, but I’m not sure why Bernie Sanders is included in it, other than that Larry David playing Bernie is popular, as Bernie still is fairly outside of the Democratic Party establishment and hasn’t been in the nationwide public eye for nearly as long as the likes of Nancy Pelosi, Joe Biden and Cryptkeeper Feinstein.