Billary won’t take the hint (after all, there is more money to be made!) 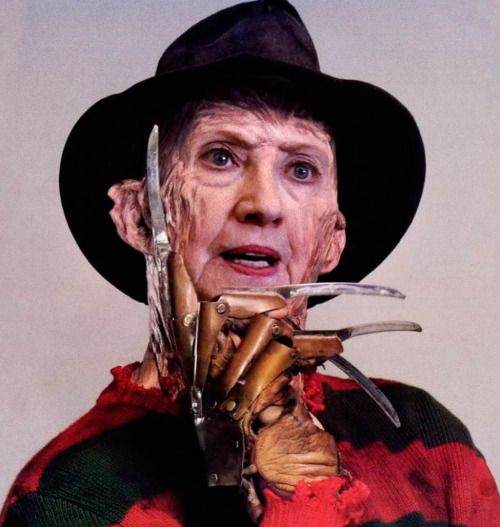 Like Freddy, Billary Clinton is the stuff of nightmares and absolutely refuses to go the fuck away, but insists on inflicting poorly produced sequels on us, each one worse than the one before it.

Indeed, Billary projects much when she claims, as she has in her pathetic new book (horribly titled What Happened, it’s due out on Tuesday), that Bernie Sanders ran for president only “to disrupt the Democratic Party.”

Billary blasts Bernie for “disrupt[ing] the Democratic Party,” but it’s far more important to baby boomer Billary to continue to profiteer from her sad, pathetic, overlong political career than it is for her to step aside for the good of the Democratic Party that sorely needs to pick itself up off of the ground, dust itself off and learn how to walk again after what her center-right, sellout brand of “Democratic” politics did to it — including giving us “President” Pussygrabber, since it was so hard for the voters to decide in November which presidential candidate they despised less (I mean that literally and seriously).

Bernie Sanders, whose nationwide approval rating long has been in the black by double digits while Billary’s long has been in the red by double digits, is the future of the Democratic Party. That is, even if he doesn’t run for president again himself — and I hope that he does — his unabashedly progressive, anti-corporate, truly populist platform is the winning platform. If Bernie doesn’t become president with that platform, then someone else of his ilk will.

It doesn’t fucking matter that while Billary uses the label “Democrat,” Bernie doesn’t, something that Billary tried to make into an issue both when she was battling Bernie in the primary season and in her bullshit new book.*

“I am proud to be a Democrat. And I wish Bernie were, too,” she taunted in her new book like a mean girl in junior high school.

Um, I’m too fucking embarrassed to be a Democrat because of Repugnican-Lite Billary — who, as Politico notes, is despised by the American electorate even more than is “President” Pussygrabber — and because of the corrupt Democratic National Committee that fucked Bernie over to help coronate Billary as the 2016 Democratic Party presidential nominee, which is why I changed my voter registration from the Democratic Party to the Green Party to now, no party.**

Only when and if the Democratic Party once again becomes what it should be — a truly progressive, truly populist party — will I be able to register as a Democrat again. And that’s Billary’s fucking fault (and Barack Obama’s too, and definitely Bill Clinton’s, and probably even Jimmy Carter’s, too — the party started drifting to the right under Carter, but then that rightward drift was solidified by Billy Boy and was only perpetuated by Caretaker in Chief Obama).

Billary Clinton uses the label “Democrat” but isn’t a Democrat, while Bernie eschews the label but perversely ironically is more of a Democrat than Billary ever has been or ever will be, if we define a Democrat as a progressive instead of a center-right sellout, a Repugican-Lite asshole.

Yes, it is torture to have to continue to hear from loser-harpy Billary — like nails dragging along a chalkboard — but again, she’s a baby boomer, and among other things, boomers refuse to leave the stage even when the strong majority of the audience clearly is tired of them.

Billary’s refusal to leave the spotlight even though she is so despised might actually work some unintended good, however; her continued presence — her cluelessly and shamelessly perpetually waving her cold, dead hands of the past in our faces — might serve as a continual reminder that the Democratic Party sorely needs to continue to go left and to jettison Clintonism if it ever wants to win the White House again.

*Whether or not Bernie, an independent who calls himself a democratic socialist, was acceptable or not as the Democratic Party’s presidential nominee wasn’t fucking up to Billary, but was up to us, the people, and Bernie won 22 states in the caucuses and primaries, and he won 46 percent of the pledged delegates (those delegates democratically won).

A huge chunk of us voters didn’t find Billary to be the actual Democrat in the race. Fuck Billary.

**The Green Party had a chance at being a decent, respectable third party after Ralph Nader ran on its ticket in 2000, I think, but it pretty much blew it.

Admittedly, I voted for Jill Stein both in November 2008 and in November 2012, as I couldn’t stomach voting for Obama again or for Billary, but admittedly, if she’s the best that the Green Party can do…