Anti-gay ticket has gayest logo EVER

I first saw this over at Slate.com, under the headline “A Hard Look at the Trump-Pence Campaign’s Penetrating New Logo.”

“Without question, no serious design house was involved in the making of this logo. Why pay the markup when an intern can throw it together in Microsoft Paint?” writes Slate.com’s J. Bryan Lowder. “And, better still, it very accurately conveys the attributes Trump wants associated with his political and personal brand — namely, that he has a penis and he uses it to screw people.”

Indeed, we symbolically are told three times in the logo that in this relationship, Donald Trump indubitably is the top and Mike Pence unquestionably is the bottom.

Most graphically, of course, is the stem of the “T” penetrating the bowl of the “P.”

And while the natural assumption would be that the bowl of the “P” is a stand-in for Pence’s rather gaping anus, it also could be his mouth, or, hell, we’re talking about Donald Trump here, so maybe it’s a hole that Trump has carved somewhere into Pence’s body…)

If the penetration weren’t enough, of course we have “TRUMP” on top of a smaller “PENCE.” “TRUMP” is on top of “PENCE” and is larger than “PENCE,” so those are two more symbolic indicators of who wears the pants.

I think that I could make the logo even gayer, though: Blue is widely considered to be a sedate, submissive, calm, receptive color, whereas red is widely considered to be an aggressive, domineering, angry, penetrative color, so I think that I would have made “TRUMP” red and “PENCE” blue (and “MAKE AMERICA GREAT AGAIN!” red) instead of the way that it is now.

I offer that consultation to the Trump/Top-Pence/Bottom campaign free of charge.

Incredibly bad campaign logos aside (as NPR noted, this logo is even worse that Billary’s logo, with the red arrow pointing to the right), there was no running mate who possibly could have made Donald Trump more palatable, so it might as well fucking have been Repugnican Tea Party Indiana Gov. Mike Pence, who, among other things, as a “born-again Christian” opposes a woman’s right to choose what to do with her own uterus and who opposes same-sex marriage, even though both matters have been settled by the U.S. Supreme Court.

While I still think that as vice president the progressive U.S. Sen. Elizabeth Warren of Massachusetts would be sidelined and neutralized in a second center-right Clinton administration, I’m perfectly fine with Billary Clinton choosing Liz as her running mate.

P.S. My brother does graphic design and I so asked him to alter the Trump-Pence logo as I described above the way that I would have done the logo (I mean, if I were going to design such a bad logo).

Here is my brother’s work: 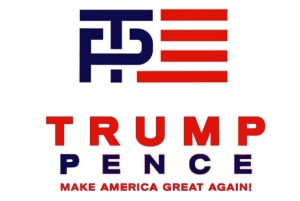 I’m not wild about the red stripes of the flag being so close to the red letters of “TRUMP,” but with the original version of the logo you get the blue “TRUMP” so close to the blue interlocking “TP,” so it’s unavoidable…

And it just occurred to me that with the spacing between the capital letters, the logo looks much like an eye chart…

Update (Saturday, July 16, 2016): Slate.com and other websites now report that apparently the Trump-Pence logo has been changed, with the interlocking “TP” graphic removed altogether. The rest of the graphic remains the same, with “TRUMP/PENCE/MAKE AMERICA GREAT AGAIN!”:

I still maintain that “TRUMP” and “MAKE AMERICA GREAT AGAIN!” should be in red and “PENCE” in blue, which is possible now especially that the “TP” logo has been removed; there now is nothing to clash with the color of the letters.