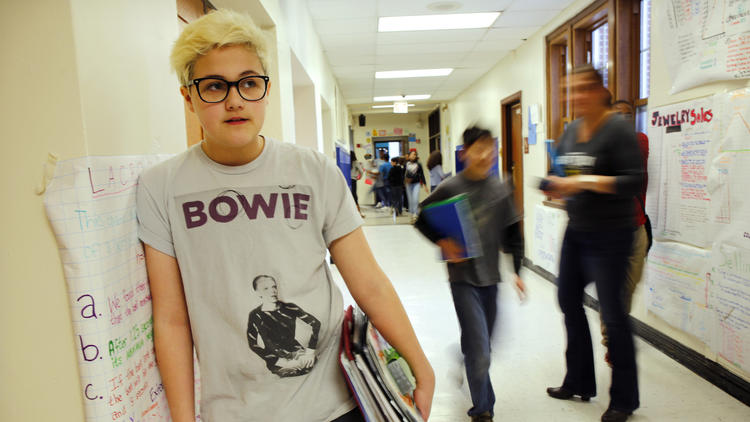 Transgender rights are civil rights and civil rights are very important, but let’s not let the Democratic Party off the hook by allowing it to fight for social and identity-group issues while allowing such huge problems as climate change and income inequality to threaten our very survival. (Above is pictured a transgender student at an Evanston, Illinois, middle school last year.)

I am happy that the Obama administration has required all public and private schools that receive federal funding to allow students to use the gender-assigned facilities according to the gender with which they identify.

Because I, unlike millions of my fellow Americans, possess some empathy, I can’t imagine making a trangender student’s life even more difficult already than it is, but, of course, the anti-transgender sentiment that we’re seeing now is mostly a manifestation of the fact that the “Christo”fascists and other fascist haters, having lost the same-sex marriage war, have to have some minority group on which to continue to piss and shit in order to feel better about their pathetic selves.

The transgender minority is a relatively tiny minority, but the haters will take whatever they can get.

Federal education law Title IX states, in part, “No person in the United States shall, on the basis of sex, be excluded from participation in, be denied the benefits of, or be subjected to discrimination under any education program or activity receiving federal financial assistance.”

The Obama administration has asserted that Title IX’s protection against sex discrimination extends to transgender students, and I agree wholeheartedly. However, while the spirit of Title IX prohibits discrimination against transgender students, for those with no conscience, no empathy and no real morality, the spirit of a law prohibiting hate-based discrimination isn’t good enough, and often they’ll defy such a law even when the letter of the law is spelled out exhaustively.

We shouldn’t have to spell out how to treat (and not to treat) other human beings, but we do. Therefore, Title IX should be updated to expressly include protections for transgender (and non-heterosexual) students, and while we’re at it, as I have said before, we also need to update the Civil Rights Act of 1964 in order to expressly protect non-heterosexual and non-gender-conforming individuals from discrimination.

Of course, 1964 was more than 50 years ago, and the people of the United States have evolved an awful lot since then — although same-sex marriage has been the law of the land for less than a year now — and so, again, the Civil Rights Act of 1964 needs to be amended (through the final passage of ENDA or otherwise) to expressly protect non-heterosexuals and non-gender-conforming individuals against discrimination.

Indeed, in its same-sex marriage ruling that turns one year old next month (Obergefell v. Hodges), the Supreme Court proclaimed in its majority opinion, in part:

… Under the Due Process Clause of the Fourteenth Amendment [of the U.S. Constitution], no State shall “deprive any person of life, liberty, or property, without due process of law.” The fundamental liberties protected by this Clause include most of the rights enumerated in the Bill of Rights. … In addition these liberties extend to certain personal choices central to individual dignity and autonomy, including intimate choices that define personal identity and beliefs. …

The identification and protection of fundamental rights is an enduring part of the judicial duty to interpret the Constitution. That responsibility, however, “has not been reduced to any formula.” … Rather, it requires courts to exercise reasoned judgment in identifying interests of the person so fundamental that the State must accord them its respect. … That process is guided by many of the same considerations relevant to analysis of other constitutional provisions that set forth broad principles rather than specific requirements. History and tradition guide and discipline this inquiry but do not set its outer boundaries. That method respects our history and learns from it without allowing the past alone to rule the present.

The nature of injustice is that we may not always see it in our own times. The generations that wrote and ratified the Bill of Rights and the Fourteenth Amendment did not presume to know the extent of freedom in all of its dimensions, and so they entrusted to future generations a charter protecting the right of all persons to enjoy liberty as we learn its meaning. When new insight reveals discord between the Constitution’s central protections and a received legal stricture, a claim to liberty must be addressed. [Emphasis mine, because that’s the money shot.] …

Liberty trumps tradition, the court ruled in its decision that correctly views the U.S. Constitution as a living document, acknowledging quite wisely that “The nature of injustice is that we may not always see it in our own times.”

But, again, fascists and haters refuse to do the right thing, refuse to treat others how they want to be treated themselves (yet they still call themselves, the majority of them, anyway, “Christians”).

I am happy that the fascists and haters are pushing the issues of transgender students’ ability to use the gendered facilities of their gender identification and of non-heterosexual and non-gender-conforming individuals not being subject to discrimination by businesses that must follow the dictates of the Civil Rights Act of 1964.

By pushing the issues, these haters and fascists are going to succeed only in having civil-rights protections for non-gender-conforming and non-heterosexual individuals expressly codified in federal law in all areas of public life (and in many areas of private life as well). It will be yet another win for liberty and equality.

All of that said, as important as are civil rights and equality for all, Democrats and those of us who are left of center should not continue to allow the Democratic Party to fight primarily for social and identity-group issues while doing little to nothing on other pressing issues, such as climate change and income inequality.

Everyone’s civil rights are important, but so are an inhabitable planet and socioeconomic justice.

I get it: Mandating that schools that receive federal funding do not discriminate against transgender students for the most part does not piss off the corporate sponsors of either the Democratic Party or the Repugnican Tea Party (which I lovingly still think of as the Coke Party and the Pepsi Party). Therefore, it wasn’t exactly a huge political stretch for the Obama administration to act on the issue of transgender students.

In our pay-to-play politics, issues that don’t threaten our plutocratic overlords’ near-total socioeconomic dominance over us commoners generally don’t get nearly as much pushback as does legislation that actually threatens our long-standing situation of gross income inequality and obscene corporate profiteering.

We minorities* ignore these other issues, opting to focus on rank tribalism instead (as the Democratic Party establishment all too gladly would have us do), at our own peril.

We have many wars and battles to fight at once.

*As a gay man, I am a minority. Again, it hasn’t been even a full year that I’ve had the right (legally recognized in all 50 states, that is) to marry a member of my sex if I so wish!

While I’m fine being a male — it is much less work than is being a female! — I have no problem with a biological male who feels like an actual female and vice-versa. It’s no skin off my ass, and everyone is entitled to the freedom to be and to express who and what he or she** is, as long as he or she doesn’t infringe on anyone else’s rights while doing so. (No, witnessing one’s own backasswards [usually] religious beliefs not being followed by someone else does not constitute a “violation” of the offended person’s “rights.” No one has the “right” not to be offended because someone else doesn’t follow his or her own bullshit religious beliefs.)

**If you don’t like my use of “he or she,” that’s OK, but we have yet to come up with a good non-gender-binary pronoun. “It” is an object, not a human being, and “their” is a plural pronoun; it never was meant to indicate the lack of gender (or either gender), but it always has referred to number.

“Their” widely is used as a gender-neutral pronoun, but I’m a grammar Nazi and therefore I’ve always rejected its use that way.