I finally get to feel the Bern at a rally (and, Bernie takes his 19th state today) 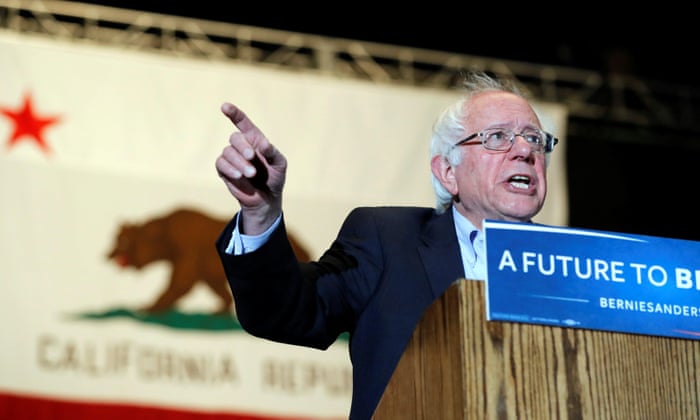 About 15,000 supporters of Bernie Sanders, yours truly included, gathered at a rally for him in Sacramento, California, last night, as seen in the photos above. (I’ve seen a crowd estimate of more than 20,000, but 15K is the official media estimate.) Sanders hopes to put California, the nation’s most populous and thus most delegate-rich state, into his win column when it votes on June 7. Below is how the map of the 2016 Democratic Party presidential primary race looks now, with the addition of Bernie’s win of West Virginia today (Bernie’s wins are in green, and the states that have yet to vote are in gray):

Last night I was really feeling the burn (in my lower extremities) as I waited in line, standing the entire time, for at least two full hours to see Bernie Sanders give a speech at the rally for him at a stadium here in Sacramento. It was the first time that I saw Bernie in person.

My friend and I arrived at the venue around 5:00 p.m., waited in a long, long line several people wide for a long, long time, finally got to sit down on the bleachers directly across from the stage, listened to some pre-Bernie remarks, including remarks by actor and activist Danny Glover, and then listened to Bernie speak from about 8:30 p.m. to 9:30 p.m., and then waited in the parking lot for about an hour before we could get the car out.

It was much like a rock concert, and it was a long night.

It was something that I wouldn’t want to do all the time, but I’d do it again. Candidates like Bernie Sanders don’t come along very often — and do as well as he has done — and who knows when (or even if) I’ll have another chance to attend a mass rally for a truly progressive presidential candidate?

From where I sat Bernie looked like a white-haired insect, and the sound system could have been better, but it was great being among such a diverse, young, jazzed crowd, and I think that I went more for the ambiance of the crowd than for Bernie’s words, with which I’m already familiar.

Unlike we’ve seen at the Trump/KKK/neo-Nazi rallies, last night I saw not one act of violence or even a verbal altercation — seriously; I viewed nothing that wasn’t peaceful.

Yes, there were some senior citizens and some middle-agers, of course, but the average age probably was somewhere in the mid-20s (no more than in the early 30s, I’d say), all races were represented, there were a lot of womenfolk there (although there were, I do believe, statistically significantly more men than women, probably at least 55 percent men to 45 percent women), and it was great to see at least two gay couples who were not shy with their public displays of affection (methinks that you won’t see that at a Der Fuehrer Trump rally [no, ’phobe, the gay couples weren’t doing anything that you wouldn’t see a straight couple doing in public]).

There was the hippie-dippy element, of course, and the college student element, of course, but also the working-class and the professional class element, and overall, again, it was quite a diverse crowd of thousands, including a lot of children playing on the grass of the stadium’s field.

I won’t regurgitate Bernie’s speech, as he didn’t really say anything that he already hasn’t, but I will note that he promised to take the fight to the convention in Philadelphia in late July (which I fully support; it’s the Billarybots who despise democracy and meaningful civic engagement), and that with every mention by Bernie of “Trump,” the crowd loudly booed as though they were booing a Disney villain — we Berners do not like Donald Trump, and he does not stand to get our vote in November — and the crowd also booed, quite appropriately, and, I thought, hilariously, every time that Bernie mentioned “Secretary Clinton,” who, if Trump is Scar (“The Lion King’s” Scar is a usurping fascist, so that’s an apt comparison), at least is on the level of Cruella de Vil (you know, stealing delegates instead of Dalmatian puppies…).

In his speech last night Bernie probably understated how steep is the hill that he still climbs, with Billary still leading him by almost 300 pledged delegates, but I and millions of others of his supporters admire that he is running the entire course of the presidential primary race and is not quitting because his opponent is ahead, and that he still is bringing the limelight to the progressive cause that long has been abandoned by the Clintonian “Democrats” (whose members of course include our Caretaker in Chief, President Hopey-Changey).

Later in his presidential campaign Bernie adopted the slogan “A future to believe in,” and indeed, we Berners are looking to the future, and for us it’s not a cult of personality (if you can call that thing that Trump possesses a “personality”) or all about winning one presidential election, but is about the long-term advancement of progressivism.

And we are advancing. Indeed, Bernie’s win in West Virginia today (by double digits in the reporting thus far) brings his total to 19 states won — again, impressive for a “fringe” candidate. (I wondered last night why Bernie was in Sacramento with West Virginia voting today, but he apparently had figured that he was safe in West Virginia and wanted to work toward winning California.)

I felt the burn last night to feel the Bern because U.S. Sen. Bernie Sanders sure feels like an historic and a transformational candidate, not like a run-of-the-mill candidate. Indeed, the self-proclaimed (little-“d”) democratic socialist has won 45 percent of the pledged delegates thus far in the Democratic Party primary race — and as we watch end-stage capitalism continue to crash and burn, apparently democratic socialism already is rising from the ashes.

Note that in order to cast a vote for Bernie on June 7, you must be registered as a Democrat or as what is called a “no party preference” voter. (“No party preference” often is called “independent,” but note that the American Independent Party in California is an actual third party and therefore registering with it does not make you an “independent.” Those registered under the American Independent Party may not vote for Bernie on June 7!)

To change your party affiliation, if you need to, you must re-register (again, no later than on May 23).

In California you must be registered at your current residence, so be sure to re-register (you can do so at the link above) if you have moved but have yet to register to vote at your new address. Even if you have moved just across the street or next door or even to a different apartment within the same complex, you need to re-register.

And don’t assume that the state Department of Motor Vehicles or the U.S. Postal Service automatically updated your voter registration for you — in order to be safe and not sorry on Election Day, always complete a free-standing voter registration (or re-registration) process on your own!