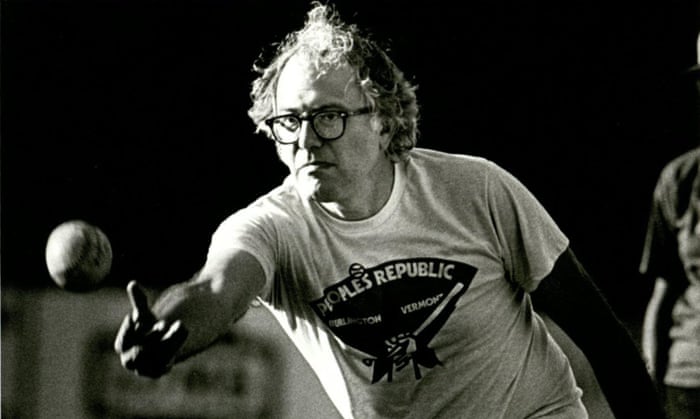 Team Billary and the Billarybots long have wanted Bernie Sanders to give up, but much to their chagrin, Team Bernie plans to keep playing until one of the two candidates reaches the necessary number of delegates to clinch the 2016 Democratic Party presidential nomination. (Bernie is shown above playing baseball in the 1980s.) Team Billary and the Billarybots have claimed that Billary hasn’t expected a coronation, but oh, she does.

So I have it now from the horse’s mouth: Bernie Sanders’ campaign manager Jeff Weaver stated recently on the Rachel Maddow show that even if Bernie hasn’t won more pledged delegates (delegates earned in primary elections and caucuses) than Billary Clinton has when the Democratic Party national convention begins in late July, the Sanders campaign nonetheless will try to persuade the super-delegates to give Bernie the nomination, on the grounds that Bernie is more likely to win the White House in November.

I have many thoughts on this.

First of all, the rules of the game were established before the first-in-the-nation state of Iowa weighed in back in February, and the rule of the game is that you have to clinch 2,383 delegates to win the presidential nomination, and that this 2,383 can be any mix of pledged delegates and super-delegates.

Them’s the rules — therefore, should the super-delegates give the win to Bernie or to Billary if either of them hadn’t won more pledged delegates than the other, it wouldn’t violate the pre-established rules. It’s how the game is played. It’s legitimate by the rules.

We can argue that the rules need to be changed, and they do (I’m fine with the super-delegates being eliminated altogether, or at least being forced to vote with their constituencies [which makes them moot, but whatever]), but they’re the rules that we must abide by for this cycle. You don’t fucking change the rules after the game has begun.

That said, as I’ve written, I don’t see the super-delegates giving Bernie the win unless he wins more pledged delegates than Billary does going into the convention.

But I wholly agree with Jeff Weaver’s argument that of paramount consideration at the convention will be, or at least should be, which candidate has the best chance of being elected president in November, and that that candidate is Bernie Sanders.

Indeed, if the super-delegates’ No. 1 aim is to pick the Democratic candidate most likely to do better in November than the other, their clear choice is Bernie Sanders.

But Billary Clinton & Co. long have had a stranglehold on the Democratic Party establishment for decades now, so I don’t expect the super-delegates — who are, for the most part, after all, Democratic Party hacks — to act in the most strategic, most intelligent way.

In fact, I wouldn’t be surprised at all if the super-delegates were to pick Billary even if Bernie actually manages to go into the convention with more pledged/earned delegates than does Billary.

Of course, the super-delegates who face re-election might have to face blowback if (under normal rather than under unusual or even extenuating political circumstances) they vote against how those whom they represent voted. (As I’ve noted, if Bernie manages to win my U.S. congressional district but my U.S. representative votes for Billary, I’ll never cast a vote for my U.S. representative again, and I sent her a letter to inform her of that. I hope that all of the super-delegates who vote against those whom they represent pay the price for that betrayal of democracy. [Um, no, I don’t support threatening the super-delegates or doing anything else illegal.])

And should the nomination go to the candidate who won fewer pledged delegates than the other, that might spell real trouble for the Democratic Party.

Of course, the Democratic Party is in real trouble already.

What a brilliant fucking strategy!

Bernie’s strategy is correct: Rather than try to form a viable third party, which is an impossibility in our corrupt, duopolistic system (we should have a multi-party/parliamentarian system, not this duopolistic bullshit that poses as democracy), our progressives’ best bet is to take back the Democratic Party from the self-serving, center-right, Clintonian sellouts who have wrecked it to the point that except on identity politics and social issues (abortion, racial and other discrimination, gay marriage, voting rights, gun control, etc.), the Democratic Party and the Repugnican Tea Party are like the Coke Party and the Pepsi Party — largely indistinguishable, especially on the matters of domestic socioeconomic justice, environmental justice and global justice (the American War Machine continues to slaughter innocent people around the world, as do American-supported regimes, such as Israel).

I do have somewhat of a problem with the super-delegates giving Bernie the win if Billary wins more pledged delegates than he does (which, again, is pretty unfuckinglikely): The Billarybots no doubt will call his victory illegitimate, and if he’s going to be the nominee I don’t want him to be a weak nominee; I want no such dark cloud over his head.

But a lot can happen between now and the end of July.

Come the end of July, when the party convenes in Philadelphia, what has transpired by then just might make it quite clear that Bernie is the stronger candidate for November to the point that the super-delegates would face little to no blowback if they gave the nomination to him, the pledged delegate count be damned.

The White House, after all, is the prize and is the most important consideration — not Billary Clinton’s ego.

But regardless of whether Billary or Bernie emerges as the victor, there are so many things that we need to change: The caucuses need to go and be replaced by primary elections. We should consider eliminating the long, drawn-out primary voting by the different states over a period of months and consider just one nationwide presidential primary election day. Ideally, the super-delegates need to go — or at least their ability to vote against their constituencies needs to be eliminated.

Beyond that, the Electoral College needs to go; if you live in a blue state or a red state, your vote for president essentially doesn’t count, so we need to elect our president on a popular vote. And we need to make room for more viable parties. We need to get rid of the duopolistic partisan system and adopt a parliamentarian one in which far more Americans have a seat at the table. Repugnican and Repugnican Lite is no choice at all. (I’m a Green Party member at heart, but, like Bernie, I have little choice but to caucus, so to speak, with the Democrats.)

Of course, such badly needed reforms would much more likely to be initiated by a President Sanders than by another President Clinton, for whom the status quo has been just peachy keen. For the rest of us, of course, not so much.