Bernie is prepared to take it to the convention in Philly in July, baby!

This is what the map of the 2016 Democratic Party presidential primary race looks like today. Bernie Sanders thus far officially has won 15 states (shown in green), Billary Clinton officially has won 18 (shown in golden-yellow), and 17 states remain (shown in gray). Bernie has been doing well enough to deny Queen Billary the crown outright, and he is prepared to take the nomination fight to the party convention. (If you have a fucking problem with that, then you are an anti-democratic fuckwad just like Donald Trump.)

After his win in Wisconsin’s Democratic Party presidential primary election yesterday with 56.6 percent to Billary Clinton’s 43.1 percent, Bernie Sanders stands at 45.5 percent of the estimated count of the pledged/democratically earned delegates to Billary Clinton’s 54.5 percent, a difference of 9 percent. (Billary’s estimated pledged delegate count is 1,302 and Bernie’s is 1,088, a difference of 214 pledged delegates.)

Seventeen states remain on the 2016 primary election season calendar, including biggies New York (247 pledged delegates), Pennsylvania (189) and my state of California (475 pledged delegates, the most of any state; we’re saving the best for last, on June 7).

Billary won’t reach the magic number of 2,383 delegates needed to win the nomination before the party convention in late July, and therefore Bernie Sanders is prepared to take the nomination fight to the convention, which is fucking great. In an actual democracy, no candidate should just be handed the race, but should have to fucking earn it from the voters.

(Der Fuehrer Donald Trump infamously anti-democratically has called for his opponent John Kasich to drop out, so when the Billarybots call for Bernie to drop out, yeah, that very much puts them on the level of Trump.)

The anti-democratic attitude of the Democratic Party hacks is stunning. I’ve seen Bernie Sanders referred to, among many other things, as an “irritant.” Forty-five-point-five percent of the vote in an ongoing race with 17 states left to go doesn’t make you an “irritant,” like a mere fly or gnat or mosquito. It makes you a contender. Perhaps an inconvenient-for-some contender, but a contender nonetheless.

And as Bernie has said many times himself, his candidacy is about much more than him as an individual; it’s about rebirthing the Democratic Party, the party that once was progressive but that over the years devolved into a center-right, Repugnican Lite Party all too happy to sell us commoners out to the DINO politicians’ corporate campaign contributors.

Indeed, the main function of the Democratic Party now, under the “leadership” of DINOs like King Bill Clinton and Queen Billary Clinton and President Hopey-Changey, is to prevent us commoners from rising up with torches and pitchforks and going after our treasonously selfish and abusive corporate overlords who for some decades now have been destroying us socioeconomically, and who, not being content enough with that, have been destroying the entire fucking planet, too.

To a large degree the Democratic Party’s bullshit works, largely though ignoring socioeconomic issues and other substantive issues and employing identity politics in the stead of substance.

Black Americans, for instance, on many measures (such as poverty and income inequality and net worth and incarceration rates) have been no better off under DINO President Hopey-Changey than they were before he took office in January 2009, but it very apparently has been more than enough for the vast majority of them that he is black (black Americans approve of the president’s job performance by around 40 percent more than do all Americans; tell me that race alone has zero to do with that).

And although Billary Clinton’s history gives black Americans no reason to believe that their lives would improve under her presidency any more than they have(n’t) under President Hopey-Changey’s, black Americans for some fucking reason slavishly support Billary as though she’d be our “third” “black” president.

And, of course, Billary also has been playing the “feminist” card — although perhaps not as much as I’d expected her to do in her second go-around for the White House. (This is probably only because the “misogyny” bullshit hasn’t played very well outside of the cult-bubble of the Billarybots.)

Identity politics won’t solve such staggering problems as rapidly growing income inequality and rapid climate change. Identity politics will keep us Americans too divided to fight back against our corporate overlords (which is exactly why corporate-sellout DINOs like Billary employ identity politics).

With identity politics we commoners and serfs continue to fight each other over who may and who may not wear dreadlocks, for instance, while collectively we boil like frogs as our corporate overlords continue to turn up the heat, literally as well as figuratively. Geniuses, we!

Those of us who support Bernie Sanders — and thus far we’re at least 45 percent of the voters in the Democratic Party primary elections and caucuses, no tiny fucking minority — are happy to see Bernie Sanders go as far with his candidacy as he possibly can.

(And a new, reputable poll out shows that one in four of us Berners won’t vote for Billary should she be on the ballot in November. I am one of those. [Call me a kamikaze; that’s fine. Shit more often than not needs to be blown up before it can be rebuilt.])

Over many months I’ve given Bernie a total of hundreds of dollars (if I haven’t hit the $1,000 mark yet, I’m close), so I’m financially invested in his bid for the White House as well as emotionally, intellectually and spiritually invested in it. A better future is worth paying for; it’s worth investing in.

So yes, I want to see Bernie carry the ball as far as he possibly still can.

It’s still possible (although admittedly difficult) for Bernie to win a majority of the pledged/democratically earned delegates, and if he accomplishes that feat and goes into the convention with that feat under his fighter’s belt, the “super-delegates” then will be put in the uncomfortable position of honoring the democratic process by ensuring that Bernie Sanders, the people’s choice, is the presidential nominee — or being typical Democratic Party hacks, giving democracy the middle finger (in the city of Philadelphia, where both the Declaration of Independence and the U.S. Constitution were born) and paying their allegiance to corporate whore Queen Billary because that’s what they’re expected to do as Democratic Party hacks.

This scenario would be quite a moment of truth for the fallen Democratic Party, a moment that is long overdue, and a moment that perhaps only the heroically, historically independently minded progressive Bernie Sanders, whose allegiance is to truth, wisdom and socioeconomic justice — and not to mindless, go-along-to-get-along, pro-corporate/sellout, pandering-to-identity-groups, establishmentarian Democratic Party bullshit — could force.

P.S. Billary’s nationwide numbers are falling. Right now Real Clear Politics’ average of nationwide polls has Billary at only 5.9 percent ahead of Bernie nationwide among Dems and Dem leaners.

RCP has Billary ahead in New York by 11 percentage points.

Final polls of Wisconsin on average had Bernie winning there by no more than 3 percent, but he won the state by 13.5 percentage points yesterday, so yes, indeed, winning New York (which votes on April 19) appears to be within Bernie’s grasp. Bernie often has performed significantly better on election day than he had polled right up to election day, and the New York primary is almost two full weeks away, a long time in American presidential politics.

One, I thought that I’d include this graphic from Wikipedia, too. It’s the same as the graphic above, except that it more helpfully gives you a little pie chart for each state showing you what portion of that state Bernie and Billary won: 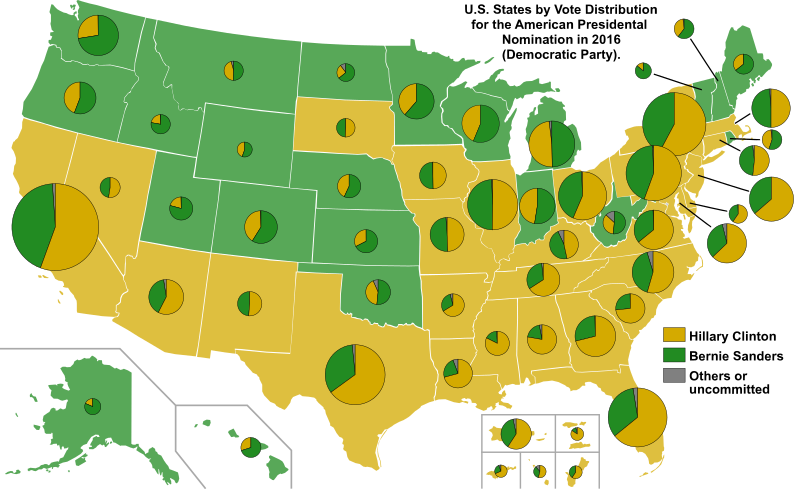 Secondly, I have to note that an increasingly desperate Billary again is proclaiming that Bernie Sanders isn’t even a real Democrat!

Again, in spirit, if not on paper, his entire life Bernie Sanders has been the Democrat that Billary Clinton never will be.

Again, while she’s worth around $25 million, Bernie is worth around $500,000. In 2014, Billary raked in around $28 million to Bernie’s $206,000. Billary has supported only a $12-an-hour federal minimum wage, while Bernie has supported the $15-an-hour federal minimum wage that California and New York just adopted. When she was old enough to know better, Billary was a Young Repugnican and was a “Goldwater girl” in 1964. Bernie Sanders, by contrast, never has supported the Repugnican Party.

I could go on, but that’s more than enough already.

Yes, Billary has been a dedicated Democratic Party hack, and has been instrumental, with her husband, Barack Obama and many others, in making the once-great Democratic Party resemble the Repugnican Party more and more with each passing year, but to me and to millions of other voters, the obvious, no-brainer answer to the question, “Mirror, mirror on the wall, who is the most Democratic of them all?” is Bernie Sanders.

Anyway, Evil Queen Billary’s claim that she’s the real Democrat in the race probably is just meant as a distraction from the fact that Bernie Sanders continues to do significantly better than she does against both Repugnican Tea Party frontrunners Donald Trump and Ted Cruz in the match-up polls.

If the idea is to keep the White House in Democratic hands come January 2017, then we can quibble about who is and who isn’t the “real” Democrat in the race (even though it’s crystal fucking clear that millionaire Billary is the pseudo-Democrat), or we can look at who is more likely to actually win the White House.

The polls say, and have been saying for a long time now, that that candidate is Bernie Sanders.

2 responses to “Bernie is prepared to take it to the convention in Philly in July, baby!”