Bernie Sanders, the true Democrat in the race, has zero reason to drop out

People line up to see Bernie Sanders today in Los Angeles, above, and a mural of Bernie on a building is shown today in Philadelphia, below. California doesn’t hold its presidential primary election until June 7, and Pennsylvania doesn’t vote until April 26, but the anti-democratic Billarybots want to shut the whole thing down long before then; they’d love for Billary Clinton to be declared the de facto winner of the Democratic Party presidential nomination right now, when 21 states still have yet to vote or caucus and when she is still shy of 1,160 pledged delegates that would bring her to the magic number of 2,383 delegates needed to win the nomination.

That’s a difference of 14.2 percent, a sizeable difference but hardly indicative of overwhelming love for Billary within the Democratic Party (Dems and those who lean Dem), and we still have 21 states to go, including my state, California, the nation’s most populous state.

Despite that, many if not most of the Billarybots have been calling for Bernie Sanders to drop out of the race already.

You know, it sure would be nice for those of us metaphorically standing in the latter half of the food line not to be told that we’re all out of food, so that we’ll have to go without.

Yet, again, many if not even most of the Billarybots, with incredibly anti-democratic sentiment, would have Bernie Sanders drop out now and just hand the race to Billary, even though you must win 2,383 delegates to sew up the Democratic Party presidential nomination — and Billary is “only” 1,160 (pledged) delegates shy of that magic number.

Yes, there are the so-called “super-delegates,” the Democratic Party bigwigs – 715 of them – who may cast their vote for the candidate of their choice at the party convention in Philadelphia in late July. (They’re also called “unpledged” delegates because they may change their mind after they already have promised one candidate their support. Thus far Billary has 467 unpledged delegates to Bernie’s 26.)

Even the Repugnican Tea Party, which is no fan of a fair democratic process (see Bush vs. Gore, for example), recognizes how deeply undemocratic it would be for its own “super-delegates” to vote against the will of the people; Wikipedia notes that “Republican Party super-delegates are obliged to vote for their state’s popular vote winner.”

Democratic Party “super-delegates” consist mostly of Democratic U.S. representatives, Democratic U.S. senators, Democratic U.S. governors and members of the Democratic National Committee – none of whom should possess the power (at least collectively, anyway), to override the will of the voters in any of the states. (Which, again, apparently is something that even the generally anti-democratic Repugnican Tea Party traitors have recognized.)

Should Bernie Sanders manage to ultimately win more pledged delegates than Billary wins, but then the “super-delegates” give Billary the win anyway at the party convention, the already ossified, obsolete Democratic Party will drive another nail into its own coffin — perhaps the final nail.

A President Billary put into office in such an anti-democratic way would be a politically weak president, not having earned the majority support of us, the people, the party’s base. (Not that she minds; she apparently just wants to be president, no matter how that happens, not entirely unlike was the case for George W. Bush in 2000.)

There are far more reasons for Bernie to stay in the race than to drop out now.

For one, again, neither candidate has reached the magic number of 2,383 delegates to clinch the nomination. That’s a pretty fucking compelling reason not to end the race now.

For another, Bernie Sanders polls much better than Billary Clinton does.

In terms of favorability, Bernie is liked more than he is disliked by all American voters by double digits in recent polls. Billary, on the other hand, is disliked more than she is liked by all American voters – by double digits in most recent polls. (A CBS News/New York Times poll of more than 1,000 registered voters throughout the nation taken within the past week, for example, shows that 52 percent have an unfavorable view of Billary, while only 31 percent have a favorable view of her – a gap of 21 percent.)

That Billary is so widely despised throughout the nation certainly accounts for why Bernie Sanders does better than she does in the match-up polling against the top two Repugnican Tea Party presidential contenders, Donald Trump and Ted Cruz.

Yet, the Billarybots tell us, we must rally behind Billary because she’s the only one who can ensure that the White House remains in Democratic hands.

The polling says something entirely otherwise, and it says it loudly and clearly: More American voters don’t like Billary than do like Billary – by a double-digit margin – while the reverse is true for Bernie. And Bernie blows both Donald Trump and Ted Cruz out of the water, whereas I could see Ted Cruz beating Billary – and perhaps Donald Trump, too, especially if yet another Clinton scandal and/or an indictment of Billary emerges during the general-election campaign. Having Billary be the party’s standard-bearer in November is a substantial risk to take.

If the goal is to ensure that a Democrat retains the White House come January 2017, the argument that Billary Clinton is the strongest candidate to accomplish that goal isn’t supported by that inconvenient thing called reality.

Billary Clinton apparently is beloved by Democratic Party hacks, who apparently account for the only 31 percent or so of Americans who report that they like her, but she isn’t even liked, much more loved, by the rest of us.

Finally, I’ve seen Internet commentary that some take issue with the pointing out of the simple fact that Billary has done best in the South, which isn’t exactly a Democratic bastion.

It’s fair game to point this out. First of all, it’s just the truth. Second of all, a Democrat in a deep-red state usually is center-right. (I know this; I lived in the very red, very backasswards state of Arizona the first three decades of my life.) The politics and the ideology of a typical self-identified Democrat in a solidly red state usually is the equivalent of what we’d call a moderate Repugnican elsewhere.

And what about on the other side? What if a Repugnican Tea Party presidential candidate in a presidential primary race did well primarily in the blue states and more poorly in the red states? What would the members of the party think and say of this candidate? They’d say that he or she obviously was not a true conservative, or he or she would do much better in the conservative states.

So why can’t we point out the simple fact that Billary does best in conservative, not progressive, states whose Democrats, for the most part, are center-right? And that she does best in states that almost never elect Democrats to the White House?*

Yes, she’s so strong that we must dutifully protect her (because, you see, she’s vulnerable).

And we’re to dutifully bend over for the members of the Democratic Party establishment in perpetuity, no matter how much they continue to sell us out to our plutocratic/corporatocratic overlords and continue to drag the party to the right to the point that ours now essentially is a one-party “democracy.”

We’re to support the Democratic Party establishment even when it appears poised to give Billary Clinton the presidential nomination (with the “super-delegates”) even if a majority of those who vote and caucus in the primary season elect Bernie Sanders over her.

Fuck. That. Shit. I, for one, am way beyond done with the “lesser”-of-two-evils, “Who-are-you-going-to-vote-for,-the-Republican?” bullshit.

I steadfastly refuse to follow the Billarybots off of the cliff toward which they’re headed.

In the June 7 California presidential primary, I’m voting for Bernie Sanders, even if he has dropped out of the race by then (his name still will appear on the ballot, since it will have been too late to have removed it from the ballot).

And on November 8, if Bernie Sanders’ name does not appear on my ballot for the office of U.S. president, I’ll write his name in, or perhaps I’ll vote for the Green Party candidate.

But I won’t vote for Billary Clinton.

Let her remain the darlin’ of the South.

Virtual ties (states with less than a 0.5 percent difference between the two candidates, although both states have been declared as “wins” for Billary):

Compare that to Bernie’s performance, in which four of the 11 states that he has won were won by the Democratic presidential candidate in all four elections from 2000 to 2012.

Keep in mind that while Billary does great in the states where they consistently elect Repugnican presidential candidates, these are the very same states that won’t vote for Billary (or for Bernie) in November.

And here’s what the 2016 Democratic Party presidential primary race map looks like thus far (Bernie’s wins are in green and Billary’s wins/“wins” are in golden-yellow):

Thus far it looks an awful lot like this map: 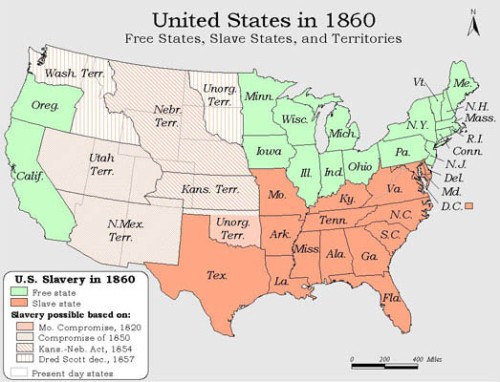 Yes, that is significant.

This is a Democratic Party presidential primary race, after all.

Update: I see that Camille Paglia, writing for Salon.com, thinks much like I do. In a piece that’s mostly about the Repugnican Tea Party presidential candidates (for whom I don’t share her analytic interest), she writes:

… The now widespread claims that Sanders voters will automatically vote for Hillary in the general election [if she wins the nomination] aren’t true in my case: I will never cast my vote for a corrupt and incompetent candidate whose every policy is poll-tested in advance.

If Hillary is the Democratic nominee, I will write in Sanders or vote for Jill Stein of the Green Party, as I did in 2012 as a protest against Obama’s unethical use of drones and the racially divisive tone of his administration. [I also voted for Stein in 2012, as I couldn’t bring myself to vote for Obama again, not after his relentlessly, ubiquitously promised “hope” and “change” never materialized. (However, I wouldn’t accuse Obama of having had a “racially divisive tone,” as I don’t see that to be the truth.)]

Voters have a tremendous opportunity this year to smash the tyrannical, money-mad machinery of both parties. A vote for Bernie Sanders is a vote for the future, while a vote for Hillary Clinton is a reward to the Democratic National Committee for its shameless manipulation and racketeering. A primary vote for Donald Trump is a rebuke to the arrogantly insular GOP establishment, which if he wins the nomination will lose its power and influence overnight.

But a Trump-Hillary death match will be a national nightmare, a race to the bottom for both parties, as Democratic and Republican operatives compete to dig up the most lurid and salacious dirt on both flawed candidates. We’ll be sadistically trapped in an endless film noir, with Trump as Citizen Kane, Don Corleone and Scarface and Hillary as Norma Desmond, Mommie Dearest and the Wicked Witch of the West.

However, there is one way out to ensure a rational, future-oriented, issues-centered presidential campaign: Democrats, vote for Bernie Sanders!