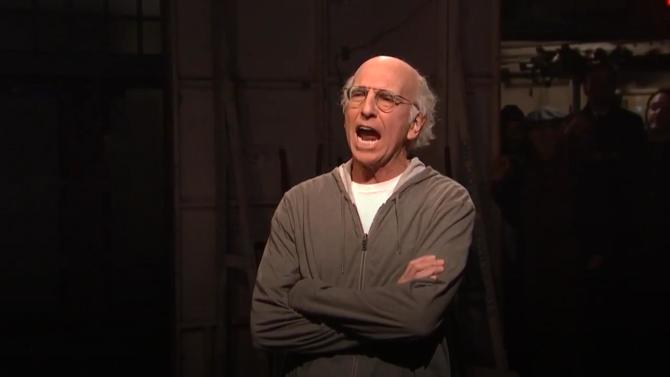 It’s chilling that “Saturday Night Live” relentlessly makes fun of the one presidential candidate who would benefit the highest number of people were he to sit in the Oval Office, yet chooses as its guest host the one who probably is the most fascistic. Above, Larry David, who has just portrayed the “unelectable” Bernie Sanders unfairly unflatteringly again in “SNL’s” “cold open,” yells “Trump’s a racist!” during Donald Trump’s monologue — because Trump’s real-life racism and race-baiting, and further afflicting the already afflicted and further comforting the already comfortable, are funny, you see.

I try to have at least somewhat of a thick skin, and I think it’s generally important that one’s own cows that aren’t all that sacred, but “Saturday Night Live” went way too far on Saturday night.

No, it’s not that you can make fun of the right wing (yes, I still suspect that Tina Fey’s Emmy-Award-winning rendition of Sarah Palin on “SNL” hurt the McCain-Palin ticket in 2008) but never the left wing.

It’s that when you make fun of the right wing, you’re usually making fun of the rich and/or the powerful, of those who routinely afflict the already downtrodden. The targets of such parody deserve their comeuppance, albeit only their comedic comeuppance (which is usually the most comeuppance that they’ll ever receive here in the United States of America, where “justice” is but a word).

But when you make fun of the left wing, unless you explicitly are making fun of limousine liberals (who are, in my book, because of their rank hypocrisy, very fair game [and who sure love fellow limo liberal Billary Clinton]), you usually are making fun of those who already are downtrodden and/or of those who are standing up for the downtrodden. And that’s not humor. That’s bullying.

And the bullying began right at “SNL’s” opening, in which Larry David, apparently high from his first portrayal of U.S. Sen. Bernie Sanders on “SNL,” returned for another portrayal of him, this time in a mock-up of MSNBC’s Rachel Maddow’s Democratic presidential candidates’ forum (which aired on Friday night), which, we are told right out of the gate, means “a debate that no one watches.” Ha ha ha ha ha ha ha! (Actually, Rachel Maddow’s viewership, especially among younger adults, apparently is doing just fine. But if we say that there is no audience for left-of-center media content, that makes it true, right?)

“SNL’s” Larry David’s Bernie Sanders from Saturday night also picks from the mock Rachel Maddow an envelope (containing a question or a dare, apparently) from the far left — “so far left,” he says, “it could never be elected.” Ha ha ha ha ha ha haaaa! Because NBC will tell us commoners who is and who is not electable, you see! We mere serfs to our corporate masters cannot (and will not) be trusted with such important decisions!

Larry David has some of Bernie Sanders’ mannerisms, such as the periodic tongue swipe, down — I’ll give him that — but overall the writers of “SNL” (who are, in the end, let’s just acknowledge it, corporate whores) very apparently don’t know where to take their Sanders gags outside of portraying him as a grumpy old man (“Of course I hate you; I hate everyone,” he tells the mock Maddow on Saturday night’s show) who’s huge on austerity (replete with owning only one pair of underwear and requesting only “vacuum pennies”).

Never mind that the real-life Sanders is older and is serious (because our nation and our planet face serious challenges) but isn’t grumpy, and never mind that the real-life Sanders does not actually preach personal austerity (such as advocating the possession of only one pair of underwear, and not one penny of the hundreds of dollars that I have given him for his campaign came from a vacuum cleaner), but he does preach against corporate abuses.

But corporate abuses are A-OK to a corporation like NBC, which demonstrated the stunningly poor judgment to allow fascist presidential aspirant Donald Trump to host its show on Saturday night.

Scroll down to the bottom of Bernie Sanders’ presidential campaign website’s home page and you’ll see the words “Paid for by Bernie 2016 (not the billionaires).” (Again, you won’t see any mention of “vacuum pennies”…)

(And yes, Sanders and Trump are pretty equal, politically speaking. What they both have in common right now is that both of them are in the top two in the partisan presidential polling for Iowa, New Hampshire and the nation, and both lead in New Hampshire right now. [See here and here.])

I don’t use the term “fascist” lightly. I don’t use it as a slam, although it is, rightfully, a slam; I use the term in its dictionary-definition sense. A Laurence W. Britt, a political scientist, a dozen years ago listed 14 characteristics of fascism that we’ve seen in world history. Most of these characteristics are quite apparent in Donald Trump’s campaign for the White House (and already have been put into practice by the Repugnican Tea Party, if not by El Trumpo himself):

Fascism isn’t funny, yet “Saturday Night Live” saw fit to have fascist Donald Trump as its guest host, and apparently sought to absolve itself with yet another “funny” “joke”: Larry David, fresh off of his second stint bashing Bernie Sanders for his corporate pimp NBC, yelled from the sidelines during Trump’s opening monologue, “You’re a racist!” and “Trump’s a racist!” — because, David said, he wanted the $5,000 reward that he’d heard any studio audience member who called Trump a “racist” during the show would receive. Trump responded that as a businessman, he couldn’t hold David’s greed against him. Ha ha ha ha ha ha haaaaaaa!

Let me remind you that in June, Donald Trump stated, in his presidential announcement speech:

Trump has yet to back down from his anti-Latino-immigrant positions, including his ludicrous call for A Great Wall along the entire border between the United States and Mexico. That link is to his presidential campaign website, which also includes this lovely little anecdote:

Most recently, an illegal immigrant from Mexico, with a long arrest record, is charged with breaking into a 64 year-old woman’s home, crushing her skull and eye sockets with a hammer, raping her, and murdering her. The Police Chief in Santa Maria says the “blood trail” leads straight to Washington. [The link is the website’s, not mine, and this is a copy and paste, so the errors are entirely the website’s.]

Yes, not only does Trump need to buy himself a competent copy editor for his campaign website, but his campaign uses rhetoric that is chillingly reminiscent of the anti-Semitic rhetoric of the fascistic Nazi Party. Trump won’t tell you of the many murders and rapes committed by American citizens, especially by white ones; no, he will only single out heinous crimes committed by the “illegal aliens” — crimes that, of course, are committed by members of many demographics, especially when you have millions of members of these demographics in the United States.

Donald Trump would have you believe, for his own personal political gain, that only those crimes that he conveniently has singled out for the xenophobic and racist — the fascistic — political persecution of one group of people are the only crimes that occur in the United States of America — or, at least, the only ones that we should focus on and worry about.

By furthering the anti-intellectualism and the pro-plutocracy of fascism by consistently unfairly and inaccurately portraying the intellectual and the anti-plutocratic presidential aspirant Bernie Sanders in an unflattering light, and by trying to make light of presidential aspirant Donald Trump’s blatantly fascistic characteristics, NBC is only helping fascism to take even further root in the United States — which, only coinkily-dinkily, I’m sure, sure further benefits a corporation like NBC.

Fascism (including its racism and xenophobia) isn’t fucking funny, and I don’t think that I can think of “Saturday Night Live” or NBC in the same light ever again.