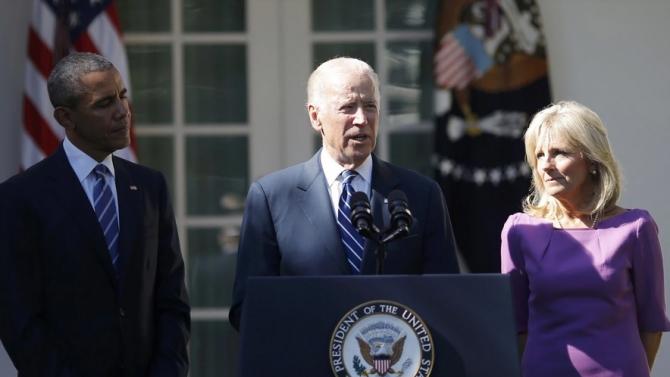 Vice President Joe Biden, flanked by President Barack Obama and by his wife Jill, announces today that he will not seek the 2016 Democratic Party presidential nomination. Even though he never announced, Biden consistently has been polling in third place, behind Billary Clinton and Bernie Sanders, in nationwide presidential-preference polls of Democratic and Democratic-leaning voters. Now, we have a two-way race between Bernie and Billary. (Jim Webb wisely dropped out yesterday, ex-Repugnican Lincoln Chafee has almost zero chance, and no, Martin O’Malley isn’t going to surge into the top two, but will remain at No. 3.)

With oh-so-coy Veep Joe Biden finally making it official today that he won’t seek the White House, it will be interesting to see how the Democratic presidential polling reshuffles in the wake of the news.

For some months now, polls of Democrats and Democratic leaners have included Biden, even though he never announced himself as a presidential candidate, and for weeks if not at least a few months now, he consistently has been polling at third place nationally. (Which, it seems to me, probably contributed to his ultimate decision not to run…)

As I type this sentence, for instance, Real Clear Politics shows recent nationwide polling averages of 47.8 percent for Billary Clinton, 25.7 percent for Bernie Sanders, 16.8 percent for Biden, and 1.2 percent for Jim Webb, who dropped out of the Democratic presidential race yesterday, since he apparently had been confused about which party his center-right-wing ideology most matches. (D’oh!)

(Lincoln Chafee doesn’t pull in even 1 percent nationally or in Iowa or in New Hampshire, and I expect him to drop out any time now. O’Malley, perhaps angling for a vice-presidential nod, might stay in longer.)

So, again, it will be interesting to see the presidential polling in the coming weeks, now that Biden at long last has removed all mystery as to his intentions for 2016.

We shall see whether Billary or Bernie gets more of Biden’s supporters who have been holding out for him thus far.

I expect most of Webb’s supporters, of whom there aren’t that many, to go to Billary, since, like Webb, she is center-right, and if he drops out soon, I expect most of O’Malley’s supporters, of whom there also aren’t that many, to go to Bernie, since, like Bernie, O’Malley is left of center and has had an anti-Billary aura about him, as has Bernie, even though Bernie hasn’t been attacking Billary and has promised that he never will. (For better or for worse, he has reiterated that his is a campaign of our most pressing issues, not of attacks upon his rivals.)

But it’s Biden’s erstwhile supporters, of course, who significantly could help Bernie or Billary in the coming weeks and months.

I’m not as worried about Bernie’s national polling as I’m focused on his polling in Iowa and in New Hampshire. He needs to come in at first place in at least one of those two states, it seems to me, for his candidacy to survive past early February (when those two states caucus and vote, on February 1 and on February 9, respectively).

Again, if Bernie doesn’t come in at No. 1 at least in Iowa or in New Hampshire, I think that it would be insurmountable for him – as I suspect that it would be insurmountable for Team Billary if Sanders were to come in at No. 1 both in Iowa and in New Hampshire. Were Bernie Sanders to win both of those states, it would, I surmise, collapse Billary in short order.

So, in the short term, what I hope to see is that Biden’s non-candidacy will benefit Bernie more than Billary in Iowa and in New Hampshire.

And hell, I’m sure that Team Bernie will welcome Webb’s, O’Malley’s and even Chafee’s supporters, too.

P.S. Of the four remaining announced Democratic candidates, my preferences, in this order, are: Sanders, O’Malley, Chafee, Billary.

Yup. I’m not being facetious; I’d rather have a President Chafee than a President Billary. Chafee never will be president, of course, as neither party wants him now that he jumped from Repugnican to Democrat in 2007, but still. Among other things, he had the sense to vote against the never-elected Bush regime’s Vietraq War in October 2002, unlike Billary, who incredibly stupidly and unwisely voted for it.