Rejected by both parties, OWS must be doing something right

An OWS’er hands President Hopey-Changey a note while the prez campaigns for re-election in New Hampshire today. Unfortunately, this is the only way to get a message to the president from the 99 percent of us, despite the love for the Occupy Wall Street movement that the treasonous Repugnican Tea Party falsely claims the Democratic Party establishment has.

While the Repugnican-Party-co-opted “tea party” traitors are old (tri-cornered) hat, the Occupy Wall Street movement seems to have staying power. Why? Because while the “tea party” traitors always have protected our plutocratic corporate overlords — the cause of our nation’s economic collapse — and thus were easy to absorb into the pro-plutocratic, pro-corporate Republican Party establishment, the OWS’ers have defied our overlords.

If OWS weren’t a force to be reckoned with, the treasonously pro-plutocratic Repugnican Tea Party wouldn’t put out fundraising e-mails like this one from the party’s congressional fundraising arm, which I received today (yes, I’m on the enemy’s e-mail list):

Democrats have made it clear who they are thankful for — the Occupy Movement protesters who have cost taxpayers millions of dollars, desecrated the American flag, hurt small businesses across the country, displayed contempt for law enforcement officials, tolerated anti-Semitism, and become the laughing stock of mainstream America.

In fact, Nancy Pelosi just sent out a fundraising email emphasizing her and Democrats’ continued support for the discredited protesters.

Democrats stand with them. We don’t. We stand with entrepreneurs who make this country, and the men and women in uniform who protect our liberties every day.

I urge you to make an immediate contribution of $20 to send a message that you stand with small businesses and law enforcement.

Your immediate $20 contribution will let Democrats know that their divisiveness and class warfare will not work in their relentless pursuit to regain the Speaker’s gavel.

P.S. Don’t miss your chance to send a message. A contribution of $20 will send a clear message that you stand with small businesses and law enforcement.

I do congratulate Sessions (or his ghostwriter) for packing so many bold-faced fucking lies and bullshit talking points into one fundraising e-mail, though. Let’s see:

That last point is demonstrated by the fact that today at a re-election campaign appearance in New Hampshire by President Hopey-Changey, an OWS’er put a note in the prez’s hand that read:

Mr. President: Over 4,000 peaceful protesters have been arrested while banksters continue to destroy the economy with impunity. You must stop the assault on our First Amendment rights. Your silence sends a message that police brutality is acceptable. Banks got bailed out. We got sold out.

Indeed, President Hopey-Changey’s silence on the Occupy Wall Street movement (which is quite similar to his silence that we saw regarding Wisconsin earlier this year while labor was fighting for its life against the pro-plutocratic, anti-working-class Repugnican Tea Party) and his silence on the blatant 1-percent-protecting-police brutality against OWS’ers has been deafening, so for the Repugnican Tea Party to assert that the Democratic Party establishment and the Occupy Wall Street movement are two peas in a pod is yet another fucking right-wing lie.

The Occupy Wall Street movement is something that neither the Coke Party nor the Pepsi Party (as I think of the nearly indistinguishable Repugnican Tea Party and Democratic Party) anticipated: a movement of citizens who are beyond sick and tired of having been sold out to our plutocratic corporate overlords by both of the major parties, who are as mad as hell and aren’t going to take it anymore, and have taken it to the streets. Who knew that the slaves would ever actually revolt?

The Democratic Party’s response to the OWS’ers has been to ignore them, for the most part — and not to criticize them publicly, lest they still be able to co-opt them — and the Repugnican Tea Party’s response has been to malign them, such as in the fundraising e-mail above. (Indeed, the OWS protesters have been “discredited” only by the traitors who comprise the Repugnican Tea Party who at the same time hypocritically accuse others of being “divisive.”)

If the OWS’ers weren’t on to something, if they weren’t a threat to the status quo, they wouldn’t be treated this way by the Coke Party and the Pepsi Party.

Their treatment at the hands of both parties is testament to their — to our — strength.

Long live the Occupy Wall Street movement, the people’s movement that the “tea party” “movement” never was and never will be.

Update (Wednesday, November 23, 2011): I didn’t adequately give the context of the episode in New Hampshire involving President Hopey-Changey yesterday.

What happened is that during his speech to his Obamabots, President Hopey-Changey was interrupted by a group of OWS’ers who attempted, using the “human mic[rophone],” to give him a message of their own. However, they weren’t far into their message before they were drowned out by the Obamabots, who started chanting “Obama, Obama, Obama…” (Creative!)

Therefore, apparently, after Obama concluded his speech, the OWS’er pictured above hand-delivered to Obama the message that the OWS’ers had tried to deliver to him. 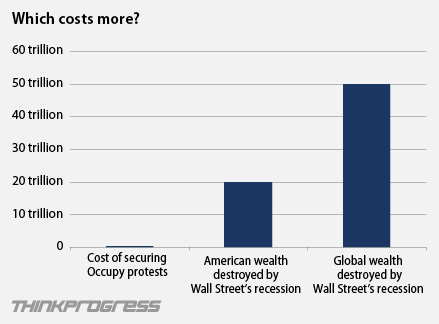 Joe. My. God. notes that “wingnut blogs are going apeshit over the just-released estimate on police overtime and other costs related to OWS.”

Of course the wingnuts wholly ignore the costs that they have incurred, such as the trillions of dollars that we blow on bogus warfare via the military-industrial complex, the budget for which the Repugnican Tea Party traitors don’t want to reduce by a single fucking dime.