Cops’ right-wing bias is a problem 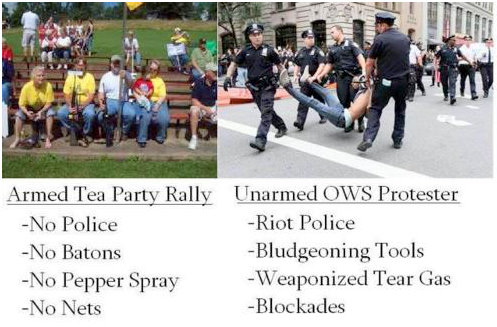 Image from Joe. My. God.

While I don’t have a dramatic first-hand example, I do recall that when I attended a large pro-labor rally at the California State Capitol here in Sacramento in February, the California Highway Patrol officers (who act as the state police on state property such as the state Capitol grounds) were vigilant in making sure that those of us on the pro-labor side of the street followed the rules, such as keeping the sidewalk in front of us completely unobstructed.

However, the California Highway Patrol officers allowed the “tea party” traitors on the other side of the street (also state grounds) to completely block the sidewalk the entire fucking time — something that I pointed out to a CHP officer, who couldn’t have cared less.

Fact is, the cops are more likely to curtail the free-speech rights of progressives than of conservatives — since most of them apparently agree with conservatives.

Our tax dollars pay the cops’ salaries, yet we progressives don’t get fair and equal treatment at the hands of law enforcement officers, while wingnuts get preferential treatment.

Do we progressives need to have our own law enforcement officers to ensure that our own fucking tax dollars benefit us? And our own military, too? Do we need to secede?