I remember sex ed in sixth grade. We were shown chainsaw views (cross-section depictions) of the female and male reproductive systems, and we were informed that males produce sperm and that females produce ova, and that the sperm and the ovum meet and that this results in a baby.

A tiny detail that they omitted, however, was how, exactly, the sperm and the ovum come to unite.

They dared not tell us back then, in Arizona circa 1980, that the erect penis repeatedly thrusts inside of the vagina and eventually ejaculates, delivering the sperm, swimming around in semen, to the waiting ovum. We didn’t get to see visual aids such as these: 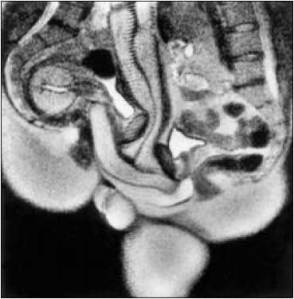 I mean, hell, that last one is a drawing of Leonard da Vinci’s — that’s art, no? And the image above that supposedly is an MRI of coitus — that’s science, yes?

Lacking this explicit instruction, my sixth-grade mind filled in the gap (so to speak…): I figured that the scary-looking female anatomy, with all of those tubes, must send a tube inside of the penis, like a ridiculously long earthworm, and collect the sperm itself. (Please don’t laugh. I was young.)

This idea was not appealing, having my sperm taken from me by a wormlike appendage from inside of an already-scary-enough-looking vagina.

That’s probably not why I turned out gay, but still, I would like to have had received a full instruction in how it all works.

And homosexuality, too, of course.

I don’t recall a mention of that when I had sex ed back in the day. If memory serves, dudes get with chicks, and that’s the only possible permutation that was presented to us.

(Speaking of ’mosexuality, wasn’t Leonardo da Vinci gay? Is that why in his diagram, only the man is fully depicted, with the woman being little more than a semen receptacle?)

Anyway, sex ed in the public schools always has been and long will be a touchy subject. Perhaps the best approach is for parents to teach their kids about sex.

But if we’re going to present sex ed at all in the public schools, we should do it right — uncut and unedited — or not at all.